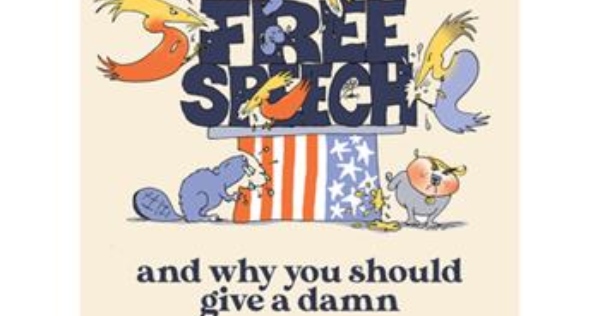 So there’s a lot in the news right now, whistleblowers who want more censorship and not less and all kinds of insanity. With all that let’s take a moment to step back and look at the little olde book review we found at Soapbox Redemption
I love the cover art so here it is from SR,
Free Speech is under attack in the age of cancel culture and My Truth! The rejection of objective truths, the rejection of facts as being prejudicial, is something the 21st Century is struggling with. If a fact is offensive it is seen as okay to reject the fact. If a truth is inconvenient it can be ignored. If a consensus is not reached, it can be said to be by narrowing the parameters until it is. It is a sad state when we must be at the extremes of everything and subjective ‘certainties’ replace the discovery of information. We have always had reactionaries and we have always had those that will take a partial truth to spin a lie. But today seems to be a special level of insanity where we are pushing the boundaries of

Free speech appears to be going in the wrong direction. Not just access to it, but the privilege to express it without fear, harm, or retribution. Not only an essential read, but a timely one – I’m loving what Johnathan Zimmerman is laying down in his book Free Speech: And Why You Should Give a Damn.

Something incredibly stupid and weak happens when ideas and speech are censored: we remain stupid and weak. Perhaps its the philosopher in me; perhaps the martial artist, but I like to think that all of us deep down become better when our ideas are tested in “the octagon”. Or maybe it’s the scientist in me that sees ideas like evolution – and through mutation and natural selection – we see what stands the test of time.

Censorship fixes the fight and provides a controlled habitat (of course, whatever the habitat the censor is comfortable with). If ideas are at their best when tested, evolved, and developed – so too our shared collective thought. And it’s not just that potentially good ideas are gagged, but the open market of idea exchange itself. Instead of rational deliberation where all are allowed to express their views – it removes the debate and our collective intellectual rigor. When the censors gags the opposing viewpoint, their motivations are now in question. Aren’t their ideas good enough to stand on their own merits?

This double-edge sword is where Zimmerman takes aim. It’s not just less of a carrot (maximizing human potential) with censorship, but it also guarantees the stick. In places and times of injustice or tyranny, censorship provides the vehicle for the status quo to remain. On the shoulders of giants like Frederick Douglass, Susan B. Anthony, Eugene V. Debs, and Martin Luther King Junior, Zimmerman reminds us that:

“Every great champion of the poor and dispossessed in United States history has also been a champion of free speech, which allowed them to critique inequality and oppression. That’s why Douglass called free speech ‘the greatest moral renovator of society and government.’ Without it, people who were oppressed and subjugated could not call public attention to their plight. Lacking other resources and privileges, free speech was their only weapon. If you took that away, they had nothing.” [page 20]

If you’re sympathetic to censorship, perhaps to ideas you may despise, you have to contend with the aforementioned world changers. Zimmerman cites another piercing Douglass quote:

“To suppress free speech is a double wrong. It violates the rights of the hearer as well as those of the speaker… It is just as criminal to rob a man of his right to speak and hear as it would be to rob him of money.” (page 23)

At the far end of censorship lies this fundamental truth – that the greatest movements towards justice and equality are hampered. We’ve learned from the sins of the past in our own nation’s history (and watch these sins continue in the present with many countries where free speech is far from empowered) that this suppression is objectively wrong – in Douglass’ words “a double wrong” violating the “rights of the hearer as well as those of the speaker”.

And for those still sympathetic to censorship – for those really unethical, unscientific, and corruptibly contempt ideas/speech – beware! Gagging the movement only gives it power. Zimmerman gives us a number of examples in the text where censorship only fueled fire to the movement. One in particular was Margaret Sanger and the contraception movement. In her magazine The Woman Rebel, she claimed women have “the right to be an un-married mother… the right to destroy… The right to create… The right to live… The right to love…” It also published information on contraception – all resulting in indictment, four counts of obscenity, and a potential 45 year jail sentence – for which she would flee the country.

Upon her return when the charges were later dropped, she would go to a speaking engagement in St. Louis where city officials urged the venue theatre to disallow her in the door. Zimmerman urges us to consider the result: “the next day, a local newspaper declared that shutting out Sanger had aroused more ‘popular interest’ than her speech would have done” (page 28).

Perhaps this should be a warning to academia and Big Tech – that every time they muzzle what Zuckerberg or Woke University finds contemptible – they are just fueling the fire of these movements.

Throughout the book, Zimmerman lays out how important the 1st Amendment has been in allowing us to criticize our leaders (Chapter 1), allowing minorities/women/LGBTQ/working-class American challenging their oppression (Chapter 2), allowing us to create art, film, and literature (Chapter 3), allowing students and teachers to speak their minds at school (Chapter 4).

In Chapter 3, I thoroughly enjoyed Zimmerman’s tour through the 1900’s with some case studies of poems, books, and even pornography that many found obscene (can you imagine what they would think today?). Through these case studies, we’re again reminded that all have a right to their own moral standards, but censoring not only fuels the demand, but amounts to something else for the censors. In Zimmerman’s words, “they simply wanted to impose their morality on someone else, which is the essence of censorship in all times and places” (page 50).

One assertively supporting censorship becomes an exemplar of self-refutation, for such view requires use of free speech to condemn it; not to mention hypocritical as it ultimately amounts to “their views should be limited as they could be harmful, just not mine”. And Zimmerman’s mic drop:

“If you believe in free speech, you have to guarantee it for everyone. Full stop. And when you start to make exceptions, watch out! The next time, the censors maybe coming for you. Sadly we keep forgetting that lesson so we have to re-learn it, over and over again” (page 70).

Zimmerman’s book is an outstanding and accessible read. The par excellence artwork, done by Signa Wilkinson, brings the concepts to life in a profound way. In this brief eighty-three page text lay a goldmine of fantastic historical resources on the matter, along with a relevant warning for the present day (and tomorrow).

Censorship is weak-minded and hypocritical. It violates the golden rule (and if by the government, the 1st Amendment) and ultimately empowers the muzzled. The remedy for bad ideas is good ideas. And nobody wants to watch a fixed fight – let ideas stand on their own merits. If you disagree and have the heart, engage and convince. If you’re morally offended/outraged, you’re not required to engage/consume. Express your rights, but don’t violate others – and their ability to engage/consume/ideate/speak.

Progress, and actualizing human potential, is just not possible without free speech. Neither is freedom, for that matter.