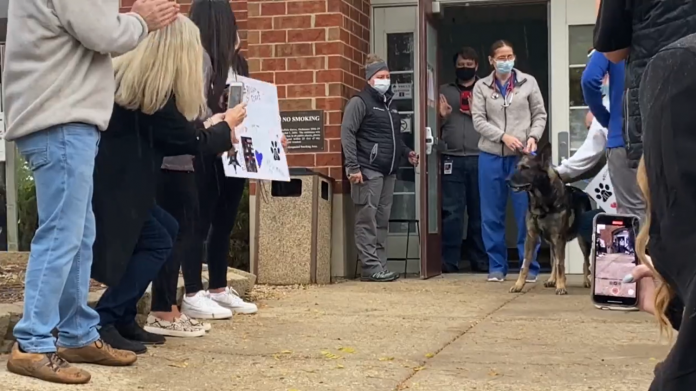 For some good wholesome news today, CBS is reporting that Riggs (the Police K-9) is out of the hospital having recovered sufficiently from his gunshot wound to be released. Riggs was involved in a OIS where the suspect was alleged to have committed two murders before shooting Riggs in the head.
From CBS,

BUFFALO GROVE, Ill. (CBS) — A Countryside man linked to two murders in Logan Square last week – and is also accused of shooting a Kenosha County, Wisconsin Sheriff’s K-9 in the head in the same day.

But as CBS 2’s Marissa Parra reported, there was a bittersweet cap on the tragedy Sunday.

No one was sure what to expect when the K-9, Riggs, was rushed to the veterinary trauma center in Buffalo Grove days ago. On his way out, he was given a hero’s welcome.

Indeed, some heroes wear capes, while some – like the Kenosha County Sheriff’s K-9 – walk on four legs.

Riggs was shot in the line of duty on Thursday – taking a bullet to the head, and making a stunning recovery. It amounted to a ray of light in Buffalo Grove following two tragedies linked on Chicago’s Northwest Side.

Police said Allen M. Brown of Countryside is the man who shot Riggs in the head – and the same man suspected of shooting and killing two people in Logan Square and Hermosa the night before.

Brown is accused of shooting a 25-year-old man dead at a bus stop near at Pulaski Road and Fullerton Avenue, and then shooting and killing Miguel Padilla, 41, a short distance away on Keystone Avenue.

Police said Brown went on to take Padilla’s Buick and drive it over the Wisconsin state line. Surveillance photo shows him browsing inside a store in Bristol, Wisconsin before finding himself surrounded by police.

After Brown made a run for it, Riggs was released by his handler and took Brown down – before Brown shot the K-9 in the face.

“A lot of it’s a blur right now,” said Kenosha County Sheriff’s Deputy Terry Tifft. “The dog did his job saving my life and those of my fellow officers, and that’s what I remember most.”

Tifft has worked with Riggs for the last seven years, and calls the K-9 his partner and his best friend. Parra asked Tifft if he knew it would end like it did – with a triumphant release from the veterinary center for Riggs.

But Riggs pulled through. Surrounded by K-9s from around the state, Riggs – sporting some new scars and stitches – walked out of the clinic to applause.

“There was some tears out there – not just rain,” said clinical care specialist Dr. Jennifer Herring. “We definitely all felt the love around that.”

Brown has a criminal history that includes aggravated battery to a police officer. This latest case is still under investigation, and so far, no further charges have been announced.

As for Riggs, he was still nursing some bruising on his brain Sunday. And while it is unlikely that he will go back to work as a police K-9, the 8-year-old dog is in fine spirits at home with his human family.