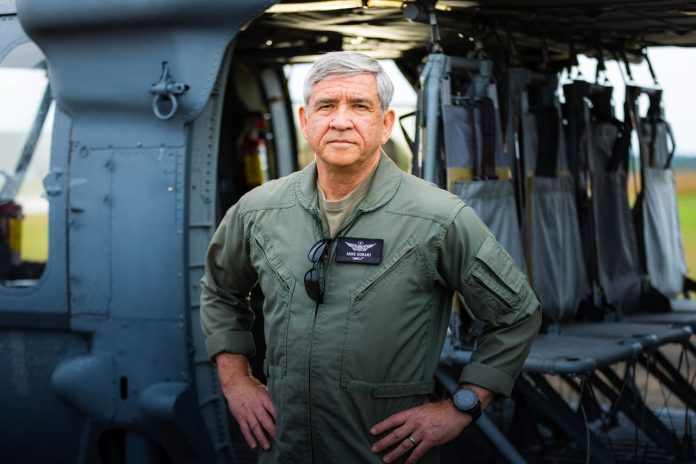 Mike Durant was one of the pilots shot down in 1993 during the Gothic Serpent mission, more famously known by the Mark Bowden book and 2001 movie “Black Hawk Down” in which a Delta/Ranger raid during the day in Mogadishu Somalia goes awry after two of the choppers are shot down by militants.

Mike Durant was the pilot of the second Black Hawk helicopter to be shot down, he was captured and held by the Somali militants after a heroic defense by Gary Gordon and Randy Shughart, the two Delta Force snipers who went in as a two man team to protect Durant while the larger force fought to them on the ground. Gordon and Shughart were awarded the Medal of Honor for their actions.

As Durant was not left behind, he now runs for Senate in Alabama to continue to serve and make a difference in the nation.

The AP has the story,

MONTGOMERY, Ala. (AP) — Mike Durant, best known as the helicopter pilot shot down and held prisoner in the 1993 “Black Hawk Down” incident, is joining the U.S. Senate race in Alabama.

Durant, now the founder and president of an aerospace company in Huntsville, announced his campaign Tuesday. He joins a crowded GOP field vying for the Republican nomination to the seat being vacated by retiring U.S. Sen. Richard Shelby.

“Between ridiculous vaccine mandates, trillions in spending, and constant assaults on innocent life and the 2nd Amendment, it’s clear that we need to mobilize people from outside of politics to step forward and serve,” Durant said.

Like other Republicans in the race, Durant expressed his admiration for former President Donald Trump.

“President Trump showed us what’s possible when outsiders step forward and take on the insiders and the politicians. I’ve spent my life either in service to my nation or focused on growing a successful business in Alabama. I’m not going to sit idly by while Joe Biden and the career politicians wreck the country I love. I’m signing up for one more tour of duty. I’m running for U.S. Senate,” Durant said.

More at the link