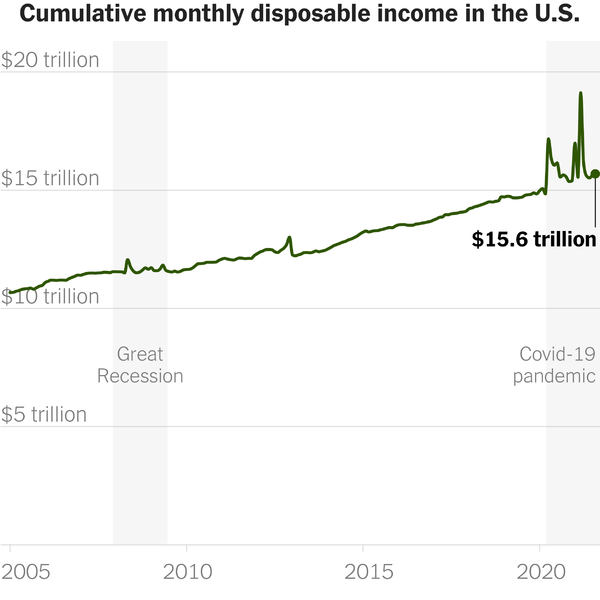 Sluggish income growth has been a defining economic problem of recent decades. With only brief exceptions, the incomes of most middle-class and working-class American families have grown frustratingly slowly — trailing well behind economic growth — since the late 1970s.

Surprisingly, however, the past two years have been one of those exceptions. Even amid a global pandemic, most American households are doing better financially than they were in 2019.

How could that be? A pandemic is not a financial crisis. Covid-19 has caused a horrible amount of death and illness and interrupted the daily rhythms of life. But it has not damaged credit markets or household balance sheets, as the housing bubble of the early 2000s did. Instead, the pandemic caused a sharp, brief recession.

Today, the unemployment rate has fallen back below 5 percent. The value of homes — the largest asset for most families — has continued rising. The S&P 500 is more than 30 percent higher than it was before the pandemic. And the federal government, across both the Trump and Biden administrations, has pumped trillions of dollars into the economy, much of it through checks sent directly to people.

As a result, incomes have surged:

And therein lies the problem… While having more disposable income can be seen as a ‘positive’ the problem is that releasing more money into the sphere for a non-backed reason has a serious side effect. It devalues money and it triggers inflation. We add that to the cumulative effect of having paid people to sit and do nothing and we are now seeing some drastic changes in the market that we normally term ‘labor’.

While seeing lower and middle incomes rise is a positive, it only remains a positive if their buying and debt busting powers rise with it. If costs come up through inflation and labor adjustments then it doesn’t matter how much a company pays per hour, the net goods at home are still going to be what they are. They will just have a higher arbitrary number attached to them.

While the COVID stimulus were billed as helping people overcome economic hardship and pay loss for the closing of the country and the absolutely devastating effect it had on the service industries for many that was just spare change to be saved or spent. That large, multiple times influx of capital untied to a trade for a good or service will devalue the dollars. Not at the time, especially if you spent them fairly quickly, but in the longer term.

So the ‘Cash Glut’ the New York Times wrote this morning about being mostly good, is devaluing at 5.3% currently. This on top of the fact that the cash given out was either far too little (for homes without income because they were mandated to stop earning) or excess cash because they had their incomes largely unaffected.

This all to say, yes people have more cash, but it didn’t come by way of more goods and services on the market for trade. It was instead vomited into existence. The government could even have taken the step of cutting tax rates to zero which wouldn’t have put more currency and trade into the market, it would instead have just let people keep everything they were earning to spend as their personal capital. This, instead of the circuitous method of ‘Stimi-Bucks’ checks, could have had a much more balanced effect on the economy and kept inflation lower. Government could still have bolstered unemployment for those who were mandated jobless by a shutdown but that on its own would have had a much less disruptive effect with negative order effects.

But hey, people don’t want to think about consequences when they are handed money to spend now. Especially when they personally need that money badly.

Short term solutions creating long term consequences that could prove more disruptive and negative than the original problems. Hope you spent the money readers. It is losing value.