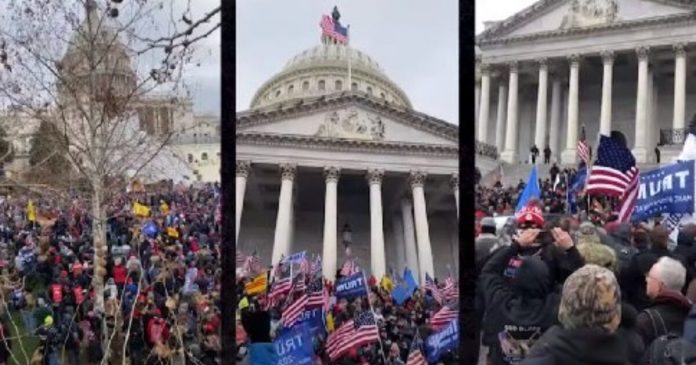 Gun ownership is now under fire for January 6th. All the crazy insurrectionists politely left their weapons at home for the insurrection, so the media wants you to know that they could’ve been armed… they are just either so incompetent at insurrection that they forgot about that option to bring modern firearms to one, or they weren’t really planning a violent armed insurrection hence the absence of arms. In the latter case, things just got… well… mischievously riotous in a year where it had already been proven it was kinda okay to do that. At least from the events of the summer in certain parts of the nation *cough* CHAZ * cough cough* it could have been seen as allowable from a certain point of view. “…gave those who wished to destroy space to do that as well.” as the Baltimore Mayor Stephanie Rawlings-Blake might have put it.
BPR,

The FBI has previously stated that no firearms were found in connection to the Jan. 6 storming of the Capitol, but despite that contention, the media is now breathlessly reporting that authorities have found guns in the homes of protesters.

“Numerous people arrested in connection with January 6 have also had weapons in their homes, including this latest case just today — 3 pistols and an AR-15,” Mother Jones explosively tweeted in reference to an NBC report.

“Some January 6 defendants, including additional Oath Keeper members charged with conspiracy, have lied to investigators and went to significant lengths to destroy evidence of their communications related to the insurrection, according to court documents. Others have kept weapons in their homes in violation of pretrial orders. And some defendants have threatened future attacks,” they reported.

NBC New York is reporting that a man named Antonio Vuksanaj was arrested Thursday in connection with the Jan. 6 protest on federal trespassing-related charges. An AR-15 as well as three other guns were allegedly found in his home. The media outlet notes that it is unclear if these were his and if they were possessed legally. It should have been fairly simple for a major media outlet to find out if that was or wasn’t the case but it apparently doesn’t make for as good a headline.

Vuksanaj was turned in by a tipster and has pleaded not guilty. He’s facing trespassing and disorderly conduct-related charges which don’t appear to have any connection to possessing firearms. Nevertheless, outlets such as Mother Jones are seizing on the fact that he had guns at home which may or may not have been perfectly legal.

Unfortunately for Vuksanaj, this isn’t the first time he’s run afoul of the law.

He was also arrested in 2019 for first-degree harassment and criminal contempt. They also busted him for second-degree unlawful imprisonment and criminal mischief as a hate crime as well as criminal possession of a weapon in the third degree because he had a previous weapon-related conviction.

It appears all of that arose from a domestic dispute in the parking lot of a Chili’s Bar and Grill. Antonio and Gina Vuksanaj reportedly violated an order of protection and actively prevented the alleged victim, who was a family member, from leaving. They evidently tried to pull the alleged victim from the car by force and damaged the vehicle with a tire iron. Sexual orientation is said to have had something to do with the encounter.

The Mother Jones report claims to have evidence that Trump loyalists brought multiple guns and weapons to the Jan. 6 riot.

But in March, that claim was supposedly put to rest by Sen. Ron Johnson (R-WI). “How many firearms were confiscated in the Capitol or on Capitol grounds during that day?” Johnson asked Jill Sanborn, an FBI official, during a Senate Homeland Security hearing.

“To my knowledge, we have not recovered any on that day from any other arrests at the scene at this point,” responded Sanborn, who serves as FBI assistant director for counterterrorism.

“I don’t want to speak on behalf of Metro and Capitol police, but, to my knowledge, none,” she asserted. “I believe that the only shots that were fired were the ones that resulted in the death of the lady,” she testified referring to Ashli Babbitt.

Sen Johnson asks FBI official how many firearms were confiscated from suspects arrested at Capitol riot on January 6. ‘To my knowledge, none,’ official answers.

Sanborn contended at the time that nobody from the riot was facing weapons charges, though a firearm was recovered from a van containing Molotov cocktails found near the Capitol. It is not publicly known whose van that was and if those involved were actual protesters taking part in the riot.

Mother Jones thinks they’re helping their cause here by outlining how much access people had to firearms without ever bothering to retrieve or use them. https://t.co/ArniK8wE4u

So why are they only being charged with “picketing and parading”?

Seems odd that they would’ve left them at home if they were planning an insurrection.

I also heard he had a sharp letter opener at his work desk.

Yes, I also read someone had a dangerous and lethal Lego set in their home too ?

Did any of them have books and newspapers at home? Were their any other examples of commonplace exercise of basic rights found in their homes?

If you’re worried about 3 pistols and a single AR at someone’s house, you won’t want to come to my place.

I can top that. 9 handguns, a shotgun and an AR-15. You ever heard of the 2nd Amendment little dude?

They had weapons *at home*? Meaning no weapons on them? Way to go with that “stellar journalism” of yours… pic.twitter.com/h7UJKlVC9N

So… worst insurrection ever, and they didn’t even bring weapons they could have?