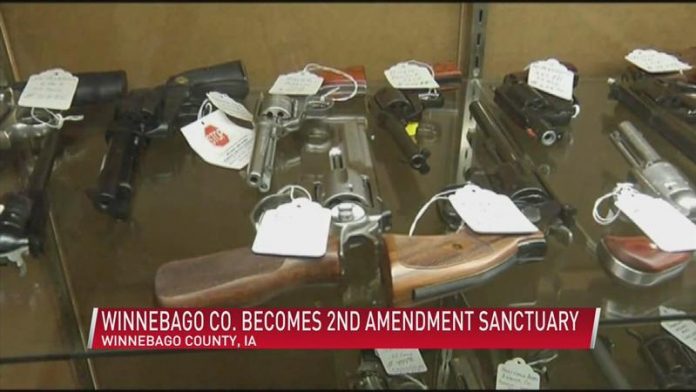 2A sanctuary counties are popping up across the country. But what does that mean exactly? Read more below to find out.
From KAAL TV:

This marks the 18th county in Iowa to declare sanctuary status and comes after the state passed a law back in June making it easier for people to buy and carry handguns without a permit.

But what exactly does that phrase sanctuary county mean?

According to the Winnebago County Board of Supervisors it’s a vow that if the state or federal government were to propose or enact legislation that goes against the 2nd amendment in its plainest terms, the county would actively oppose it.

Gun owner Brandon Cink brought the resolution to the county supervisors and he said that Winnebago County is known for its hunting and recreational gun use. He believes any gun restrictions would have a large impact on their economy as well.

“It’s to the point where it needs to be done before everything’s taken away in essence. Just leave people be. That’s all we want,” Cink said.

County supervisors say that it’s up to the county sheriff to refuse to enforce any future gun restrictions. ABC News reported that in 2020 Iowa saw a 23 percent increase in shooting deaths in suicides and homicides. This is a part of an overall national increase in gun violence.