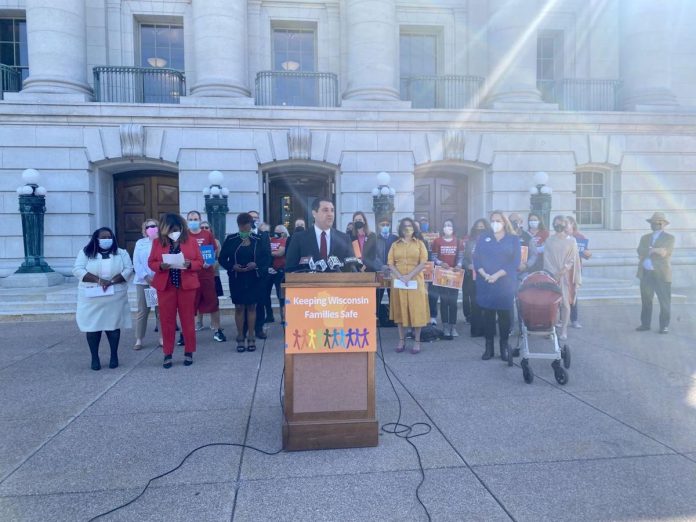 Red Flag laws aren’t just in Military news, the push is being made to make them part of Wisconsin law too. Democrats are using the stress of the COVID-19 pandemic and subsequent events to make the case that the ability to extra-judicially remove someone’s second amendment rights needs to be on the list of powers grants to the police or family members prior to any due process scrutiny.

Red flag laws are almost universally civil rights disasters, the only reason they are considered more palatable for the invasiveness and intrusion is that it deals with firearms. Firearms are still considered one of those topics where it is absolutely okay to attack someone on that subject because segments of society consider their very existence ‘evil’, or close enough.

Led by Attorney General Josh Kaul, Wisconsin Democrats are reintroducing legislation to expand gun restrictions. Both bills are unlikely to be considered by the Republican-led Legislature, which has rejected them multiple times, but Democrats argue the COVID-19 pandemic has escalated their necessity.

Under one proposal, known as a “red-flag” law, family members or police could ask a judge to temporarily remove firearms from a person considered to be a danger to themselves or others. The other bill would expand background checks for most gun purchases, including those made online or at gun shows.

“There is more urgency now than there was even two years ago, because we have seen the impacts of the pandemic and we need action to make our communities safer now,” Kaul said during a Thursday news conference. “We can’t wait for action.”

Kaul, a Democrat up for reelection in 2022, contrasted the gun proposals with the ongoing Republican-led investigation into the 2020 presidential election.

“There’s $600,000 being spent on an investigation into conspiracy theories; there are hearings on conspiracy theories,” Kaul said. “Let’s address real issues that Wisconsinites are actually facing and work to make communities safer.”

In 2019, the last time the Marquette University Law School poll asked about it, 80% of Wisconsin voters supported requiring background checks for private sales and gun show sales, and 81% supported allowing the seizure of firearms from people found by a judge to be a danger to themselves or others.

Legislators from Madison and Milwaukee spoke of incidents of gun violence in their communities, including the deaths of 10-year-old Sierra Guyton in Milwaukee and 11-year-old Anissa Scott in Madison.

Guyton was at a playground in 2014 when she was caught in the crossfire of a gunfight and shot in the head. Scott, who lived in Sun Prairie, was a passenger in a car in 2020 when she was struck by gunfire from another vehicle intended for the driver.

“The more closely impacted you are, the more (gun violence) becomes a matter of life or death, and not some symbolic policy debate in Madison or Washington, D.C.,” said Sen. LaTonya Johnson, D-Milwaukee, who recalled attending Guyton’s funeral.

“It’s past time that we free ourselves of this fear and we create a safer state for our kids, our families and our neighbors to live in,” Agard said.

Republicans, who hold majorities in both chambers of the Legislature, have never indicated an interest in either proposal.

When Gov. Tony Evers urged the Legislature to take up a red-flag bill in 2019, GOP leaders said they believed the legislation would pose “threats to due process and the 2nd Amendment rights of law-abiding citizens.”

In November 2019, Evers called a special session urging lawmakers to pass the red-flag bill and the bill expanding background checks.

GOP lawmakers in both chambers gaveled in and, within a minute, adjourned the special sessions without debating the proposals.

Share your opinion on this topic by sending a letter to the editor to tctvoice@madison.com. Include your full name, hometown and phone number. Your name and town will be published. The phone number is for verification purposes only. Please keep your letter to 250 words or less.