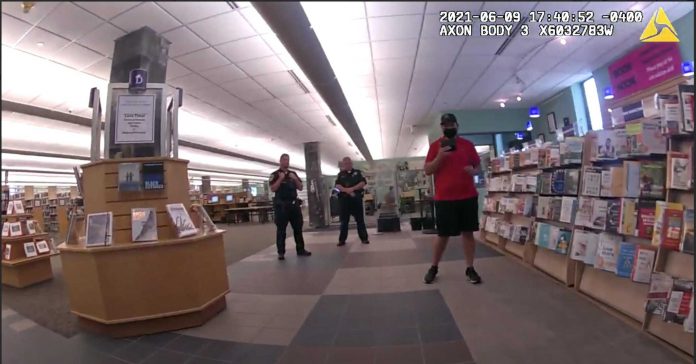 The 1st Amendment is an issue that can rub people the wrong way. There are plenty of manners expression takes that can rub others the wrong way and sometimes that is even done on purpose to get a rise, get a response, and try and trigger event.
I don’t know if this is one of those times but cops vs. somebody filming is an old song and dance,

DANBURY — A YouTuber who has recorded viral videos of city officers and officials has filed a federal lawsuit against the city over a June incident at Danbury Library.

YouTuber SeanPaul Reyes claims his First and Fourth Amendment rights were violated when he attempted to record video at Danbury Library. Four Danbury police officers, who were reprimanded after an internal investigation of the incident, were named in the suit, along with the police chief, library director and city of Danbury.

“In this matter, plaintiff SeanPaul Reyes seeks redress for municipal police employees’ decision to harass him while he was peacefully filming inside the Danbury Public Library in Danbury, Connecticut,” states the complaint filed Thursday in U.S. District Court, District of Connecticut.

Reyes is representing himself in the case, according to the court documents. He told Heart Connecticut Media he is preparing another lawsuit related to the day he was arrested at Danbury City Hall in July.

Chief Patrick Ridenhour said he was not aware of the lawsuit and has not seen it.

“It’s all going to be in the hands of the attorneys,” he said. “We’ll see what happens from there.”

Laszlo Pinter, corporation counsel for Danbury, said he has not seen the suit and could not comment. The mayor and library director couldn’t be immediately reached for comment on Monday.

The Police Department’s internal investigation of the incident found officers did not infringe on Reyes’ constitutional rights, although they violated various department policies.

Libraries are considered “limited public forums,” so library administrators may implement “reasonable rules to ensure that the facility is used for its intended purposes,” the chief said in his report. The city attorney has said similarly.

The complaint claims Reyes did not “disturb” anyone at the library and that the library didn’t have a policy against photography and videography at the time. The library’s code of conduct — last revised on June 10, the day after the incident — states that patrons must get permission from the library director to film or photograph.

Reyes’ rights to free speech and freedom of the press were violated when he was prevented from filming in the library, told he would be arrested and asked to leave, according to the lawsuit.

“Mr. Reyes seeks damages to remind the defendants that the peaceful exercise of one’s 1st Amendment rights in public is a right Mr. Reyes has as an individual and as a member of the press in this country,” the complaint states.

The suit alleges the police violated his Fourth Amendment rights because Reyes was “forced to surrender his driver’s license and threatened with arrest if he did not so comply.” In doing so, the officers “illegally seized his identity and threatened to deprive plaintiff of his liberty,” the suit claims.

Reyes, of Bellport, N.Y., is in the midst of a criminal case after he was arrested on July 15 at Danbury City Hall.

He was arrested on a criminal trespass in the first degree charge after filming at the Waterbury Post Office in May and is scheduled to appear in court in Waterbury on Oct. 29.

The police department is reviewing at least one other complaint Reyes has filed against police.

“We’ll review and he’ll get a response when it’s complete,” Ridenhour said.

What happened at the library

Reyes was in Connecticut to do freelance photography for a media company when he stopped by Danbury Library around 5 p.m. June 9, the lawsuit claims. On his cellphone, he “discretely” filmed in a “quiet and unobtrusive manner,” the complaint states.

The security guard told Reyes to stop filming and asked him to leave if he wouldn’t, according to his video and the lawsuit.

At least one patron told police he left the library because Reyes was “loud and using profanity” when talking to the security guard, according to the chief’s letter to Reyes in the internal investigation report.

Four police officers and a sergeant were eventually called. The sergeant and three of those officers are named in the suit.

Reyes’ video and body camera footage show police officers and the YouTuber mocking each other. Three of the officers were “very rude and disrespectful” toward Reyes, the lawsuit claims.

After interacting with Reyes, one officer told another the YouTuber would have been on the “f—- ground” five years ago and “dead” 20 years ago, according to body camera footage.

“The defendants in this matter were very rude, disrespectful and blatantly violated the plaintiff’s rights and the defendant Ridenhour has failed to properly train and supervise the police officer defendants,” the lawsuit states.

Reyes did not ask for a specific monetary amount in the suit, but is seeking “damages for the violation of his rights” and for the court to order the city to repay his “reasonable costs and fees.” He is also seeking “any further relief as justice requires.”

Reyes is a part of a group of so-called First Amendment Auditors, who record interactions with police and other officials to see how they abide by the U.S. Constitution and then share those videos on social media.

He has traveled to various states, including New York and Maryland, where in Hartford County, Maryland, he was required to complete community service and write an apology letter after being arrested during a vehicle stop, according to WMAR Baltimore.

Reyes’ channel has about 94,900 subscribers as of Monday afternoon, growing by more than 72,000 subscribers since around the time of the Danbury Library video. The New York Post reported he earned $8,000 in his first month as an auditor.