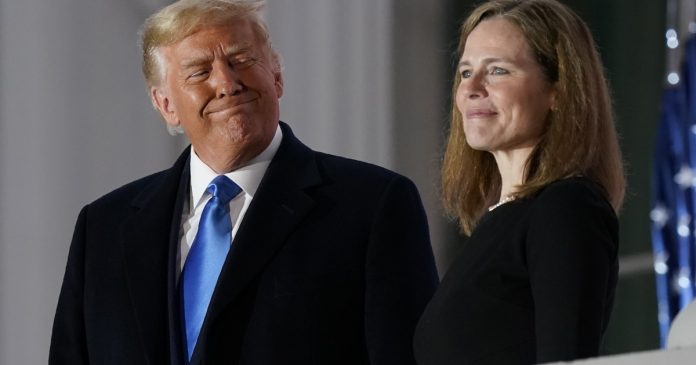 The Supreme Court often gets flack for their partisan leanings and personal opinions, but looking at how the recent court has acted it is hard to say they are being overtly partisan from any position other than against the justices you ideologically disagree with. The Supreme Court is perhaps the final remaining body that seems to take their duty to remain as above partisan squabbles as they can very seriously. They do not always succeed, but they do make efforts and it can be seen from both the left and right leaning justices when you read into their opinions.
But not everyone sees it that way and since the LA Times is at odds with the current 6 right leaning justices, they can write Op-Eds letting their frustrations be known.
LA Times,

If Supreme Court justices don’t want to be seen as “partisan hacks,” they should not act like them.

In a speech last week at the McConnell Center at the University of Louisville Law School, Justice Amy Coney Barrett said, “This court is not comprised of a bunch of partisan hacks.” She added, “Judicial philosophies are not the same as political parties.”

Setting aside the irony of uttering these statements at an event honoring Sen. Mitch McConnell, who blocked the confirmation of Merrick Garland to the court and rushed through the confirmation of Barrett precisely because of their ideologies, the reality is that time and again the court’s Republican majority has handed down decisions strongly favoring Republicans in the political process.

Does Barrett really expect people to believe that is a coincidence?

In the same speech, Barrett reiterated that she is an originalist, one who believes that the Constitution must be interpreted to mean what it might have meant at the time it was adopted. Yet not one of the court’s decisions about the election process favoring Republicans can possibly be defended on originalist grounds, which shows how wrong her claims really are.

In a series of rulings, with all of the Republican-appointed justices in the majority and the Democratic-appointed justices dissenting, the court has strongly tilted the scales in elections in favor of Republicans. In 2010, in Citizens United vs. Federal Election Commission, the court ruled 5 to 4 that corporations can spend unlimited amounts to get candidates elected or defeated.

Business interests, which overwhelmingly favor Republican candidates in their campaign expenditures, outspend unions by more than 15 to 1. There is no plausible argument that the original meaning of the 1st Amendment included a right of corporations to spend unlimited amounts in election campaigns. Neither political expenditures nor corporations, as we know them today, even existed at the founding of this country.

In decisions in 2013 and this year, the court’s conservative majority eviscerated the protections of the 1965 Voting Rights Act in a manner that helps Republicans and hurts voters of color and Democrats. In 2013, in Shelby County vs. Holder, the court, 5 to 4, nullified the law’s requirement that states with a history of race discrimination get preclearance before making a significant change in their election systems. Every one of these states where preclearance was required was controlled by Republicans.

Chief Justice John G. Roberts Jr. wrote for the majority and said that Congress violated the principle of equal state sovereignty by not treating all states the same. Nowhere is that found in the Constitution — and it was certainly not the understanding when the 14th Amendment was adopted by a Congress that imposed Reconstruction, including military rule, on Southern states.

After the Shelby County case, Republican-controlled governments in states like Texas and North Carolina immediately put in place restrictions on voting that had been previously denied preclearance.

In July, the court, now with six Republican appointees, gutted another crucial provision of the Voting Rights Act. Section 2 prohibits state and local governments from having election systems that discriminate against minority voters. Congress amended this provision in 1982 to provide that the law is violated if there is proof of a racially discriminatory impact.

The case, Brnovich vs. Democratic National Committee, involved two provisions of Arizona law that the United States Court of Appeals found had a discriminatory effect against voters of color. But Justice Samuel Alito, writing for the Republican-appointed justices, imposed many requirements that will make it very difficult, if not impossible, to prove a violation of the Voting Rights Act.

He said, for example, that courts must consider whether the new restrictions are worse than what existed in 1982 when the law was amended, all other ways for people to vote, and the state’s interest in preventing fraud. For any restriction on voting, a court can now say it isn’t as bad as some that existed earlier, or that there are enough other ways to vote, or that the state’s interests are enough to justify the law. In her dissent in Brnovich, Justice Elena Kagan noted there’s new evidence that “the Shelby ruling may jeopardize decades of voting rights progress.”

Conservative justices, who say they focus on the text of the law in interpreting statutes, created limits on the reach of the Voting Rights Act that are nowhere mentioned in it. The result is that the laws adopted by Republican legislatures in Georgia, Florida, Texas and other states are now far more likely to be upheld.

In these and other cases, the Republican justices changed the law to dramatically favor Republicans in the political process. Barrett’s protest against the justices being seen as “partisan hacks” rings hollow when that is what they have become. And it is risible to say that “judicial philosophies are not the same as political parties.” I would challenge her to give a single instance where the conservative justices on the court took positions that were at odds with the views of the Republican Party.

The most obvious example, of course, is abortion. The GOP vehemently opposes abortion rights and Republican presidents have appointed justices with that view. No one should have been surprised when the five conservative justices refused to enjoin the Texas law banning abortions after the sixth week of pregnancy even though it blatantly violates the constitutional right to abortion.

Supreme Court decisions always have been and always will be a product of the ideology of the justices. No one — least of all a Supreme Court justice — should pretend otherwise.

Erwin Chemerinsky is dean of the UC Berkeley School of Law and a contributing writer to Opinion. He is the author most recently of “Presumed Guilty: How the Supreme Court Empowered the Police and Subverted Civil Rights.”