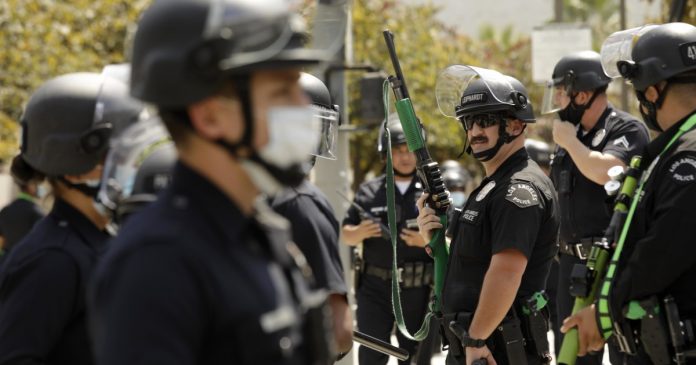 Vaccine Mandates are are hot buttons. While some do not trust a medicine so quickly thrust to market. Others are truly down the rabbit hole with the 5G conspiracies. But most of the opposition has nothing to do with the the vaccines or what is in them, it is the lack of medical autonomy.

From the LA Times,

Thousands of Los Angeles Police Department employees plan to seek exemptions to rules requiring city employees to get vaccinated against COVID-19, according to preliminary figures obtained Monday by The Times.

More than 2,600 LAPD employees have indicated that they plan to pursue religious exemptions, while more than 350 plan to seek medical ones, according to a source in city government who was not authorized to share the preliminary data.

Under the ordinance, city employees must be fully vaccinated by Oct. 5 unless they are granted a religious or medical exemption. Employees who receive exemptions will be subject to regular testing for the coronavirus, according to the ordinance.

City officials pushed back a deadline last week for employees to seek an exemption to the vaccination requirement, instead giving workers until the end of Monday to indicate that they plan to pursue an exemption. As of early evening on Monday, nearly 3,000 of 12,311 LAPD employees had done so, and the number could grow before a midnight cutoff. Preliminary figures were not available for other city departments.

The numbers indicate how many employees say they intend to seek an exemption, but the city has yet to vet such requests. Workers could still opt to get vaccinated after telling the city they plan to ask for an exemption.

The vaccination rate among LAPD employees has hovered at slightly more than 50% for months, lagging behind the general public and raising concerns about the health risk posed to the people they interact with on the streets and in confined spaces such as jails and courthouses.

Activists have routinely recorded police officers in public spaces without masks, despite a department directive to wear them “whenever in public or in the workplace.” Ten LAPD employees have died of COVID-19, and thousands have been infected.

In recent days, a group of LAPD employees filed a federal lawsuit challenging the vaccination mandate, arguing that it violates their constitutional rights to privacy and due process. The employees who sued include people “who could not assert a medical or religious exemption,” as well as people who contend they have natural antibodies from getting the virus, according to the legal complaint, filed Saturday in U.S. District Court in Los Angeles.

On Monday, L.A. City Atty. Mike Feuer called the lawsuit “much more political statement than it is sound legal argument” and said he was confident it would fail to overturn the city requirement.

“It cannot be the case that the health of anyone’s child, anyone’s grandma, anybody in our city could be put at risk because they come into contact with a first responder who hasn’t been vaccinated,” Feuer said.

Firefighters 4 Freedom, a group opposing the vaccination mandate, has urged unvaccinated employees not to file for medical or religious exemptions, calling them “a trap.” Kevin McBride, the group’s attorney, argued in a recent letter to L.A. Fire Chief Ralph Terrazas that “the only reason to require firefighters to seek an exemption is to identify those who oppose the COVID vaccine mandate” for “potential misuse on this issue in the future.”

“The goal … is to overturn an unconstitutional city ordinance, not to be granted a stay of execution,” Firefighters 4 Freedom wrote in an Instagram post. “Getting any type of exemption will never make this problem of government overreach go away.”

Exemptions may be easier to secure than a legal judgment overturning the mandate, however.

Lindsay F. Wiley, director of the Health Law and Policy Program at American University Washington College of Law, called religious exemptions “an incredibly tricky area” for employers implementing vaccination requirements. The 1st Amendment limits the ability of government to distinguish between recognized religions and individual belief, Wiley said, which means an employer cannot simply toss out a request because it isn’t backed by an official in a recognized sect.

Wiley said some employers have scrutinized whether a worker is stating a religious belief in pursuit of an exemption, rather than expressing other kinds of concerns. But vaccination opponents have advised workers on how to word their exemption requests to avoid triggering such objections.

“The bottom line is, these are really easy to game,” Wiley said.

The L.A. ordinance defines the vaccination requirement as a condition of city employment but does not spell out what happens if someone refuses to get the shots and fails to get approved for an exemption. City officials have been in talks with employee unions about how the vaccination rules affect workers.

The Los Angeles Police Protective League has argued that the city should allow weekly testing as an alternative to getting vaccinated, regardless of whether an employee has obtained a medical or religious exemption. In a written proposal, the police union argued that doing so “strikes an appropriate balance.”

That would violate the ordinance passed last month by the L.A. City Council, which explicitly states that city workers will not be able to “opt out” of vaccination by getting tested weekly, since the “goal is to have a vaccinated workforce.”