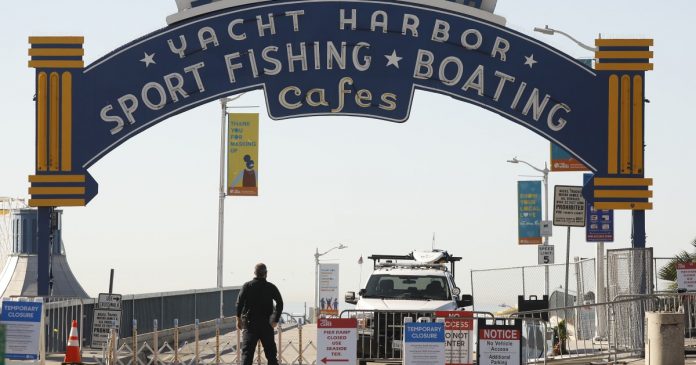 The difference between an educated suggestion and a mandate are contentious issues right now. There is no doubt that, despite a vaccinated majority in this nation, that the way government is handling vaccination has been a mess (messes seem to be going around in spades from leadership these days).

In Los Angeles the debate over making the COVID vaccines mandatory continues.

From the LA Times,

A crowd of several hundred people, many carrying American flags and holding signs that read, “No jabs for jobs” and “Stop the medical tyranny,” gathered near Santa Monica’s pier Sunday to push back against proposed COVID-19 vaccination mandates.

Held in a park off a busy stretch of Ocean Avenue, the gathering — billed as a “worldwide rally for freedom” — appeared half political rally and half religious gathering. Organizers led the group in prayers and attendees—mostly unmasked—milled at booths to learn about recall attempts of several Democrats, including Gov. Gavin Newsom and Los Angeles County Dist. Atty. George Gascon.

A man who identified himself as Craig, but declined to give his last name, said he showed up at the park to oppose vaccine requirements. He held several posters, including one criticizing the vaccine and another that equated abortion with murder.

“It’s obvious these vaccinations are a sign of segregation and that’s a form of tyranny,” the Huntington Park resident said.

Santa Clarita resident Sharon Kotas, who said she works for Los Angeles County Department of Children and Family Services, came to the rally to protest vaccine mandates. In L.A. County, workers must provide proof of vaccination against COVID-19 by Oct. 1.

“It should be my body, my choice,” said Kotas, 25, adding that she anticipated getting fired for not getting the shot.

Health experts have said the COVID-19 vaccines are safe, effective and save lives. Data released by Los Angeles County on Sunday showed that hospitals are seeing a greater number of unvaccinated people who are younger and otherwise healthy fill up their beds.

Tourists visiting the pier Sunday afternoon stared as they walked past the rally.

Andrea Infante, who is visiting L.A. from Mexico, turned around on her scooter when she saw the crowd. The 29-year-old said while she respected the protesters, she has different views about inoculations.

“It’s better to have the vaccine,” she said, adding that her family traveled to Texas to get the shot because it was easier than trying to get it in Mexico.

In the days leading up to the rally, Santa Monica police said they were staffing up in preparation for the possibility that violence could break out between the anti-vaccination group and counter-protesters who indicated to officials they planned to attend.

Authorities hoped the increased police presence would help deter skirmishes and other issues that have plagued protests in cities across Southern California.

“We want people to know the minute they get into town that this isn’t going to be a free-for-all melee,” said Santa Monica police Sgt. Erika Aklufi. “We’re really trying to push people toward a peaceful protest. We’re hoping for the best.”

No counterprotests had started as of 2:30 p.m.

Interim Police Chief Jacqueline Seabrooks said in a video message posted to the police department’s Facebook page on Wednesday that the city and police department “values the ability of the public to engage in peacefully expressive conduct as guaranteed by the U.S. Constitution.”

“On the other hand, we do take issue with those who come to our community specifically to intimidate — through violence or other criminal behavior — those who seek to peacefully exercise their constitutional rights,” she said.

In response to the planned event, the Santa Monica City Council on Tuesday passed an emergency ordinance banning items including plastic pipes, baseball bats, aerosol sprays, glass bottles, chains longer than 20 inches, metal containers, shields, gas masks, helmets, body armor, bricks and rocks. Some of those items have been used as weapons at similar rallies across the country in recent years.

Signs listing the banned items were affixed to traffic lights across downtown Sunday.

Protests over vaccinations and other regulations aimed at stemming the spread of COVID-19 have been widespread through the pandemic, at times leading to brawls among attendees. A man was stabbed and a reporter was assaulted during a melee at an anti-vaccination rally in downtown Los Angeles earlier this month.

Anti-mask demonstrators have also converged near the Huntington Beach pier in recent months.

In January, a group of anti-vaccine protesters disrupted operations at a mass COVID-19 vaccination center at Dodger Stadium, prompting some officials to call for increased security at testing and vaccination sites.

There is no blanket rule mandating that people get vaccinated in California, but some cities have or are considering requiring proof of vaccination to enter certain businesses. New York City became the first major city to do so this month, followed by San Francisco and New Orleans.

The Los Angeles City Council this month voted to direct city attorneys to draft a law that would require people to have at least one dose of a vaccine to visit indoor restaurants, bars, gyms, shops and movie theaters. Much of the plan has not been worked out, and the full City Council still must approve the proposed law.

Among the lineup of conservative speakers slated to attend Sunday’s rally is David Bramante, who is running in the recall election. Bramante recently created a satirical site called the Anonymous Unvaccinated Reporting System, which asked people to report those who are unvaccinated.

“My goal with the site is to point out how dangerously close we are as society to having a company like AURS exist; a world where friends, family and neighbors are reporting each other to a third-party website and local authorities,” he wrote on his website.

Tony Moon, better known as the Roof Korean on Twitter, was also expected to speak, according to a flier advertising the event.

Moon, who has acknowledged being in Washington, D.C., on the day of the insurrection at the Capitol in January and was also present at violent clashes outside the Wi Spa in Westlake, spoke at a protest in Los Angeles that turned violent this month.

Moon has defended his actions on Twitter, accusing counter-protesters of stoking the violence and sharing right-wing posts praising “patriots” for confronting “antifa.”