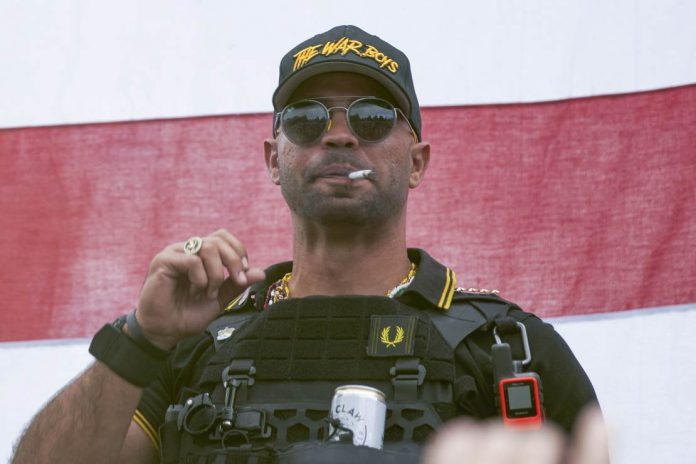 The Proud Boys, for those unaware, are an organization often accused of having white supremacist goals, tendencies, and membership. They have been often accused of Nazisim and Neo-Nazism. They are a contentious organization who has placed themselves in direct opposition to the equally contentious Antifa.
In the minds of most Americans both organizations are viewed rather negatively and in a tone of ridiculousness. The Proud Boy Leader, Henry Tarrio, who puts a damper on some of the White Supremacist claims of the Proud Boy opposition, has been sentenced for misdemeanor crimes.
PJ Takes some exemption to this. Your opinion, of course, is yours to form.

Never mind that antifa and BLM burned our cities with impunity for over a year. If you lean right you will pay the price.

Henry “Enrique” Tarrio, the leader of the Proud Boys, a right-leaning group of “Western chauvinist” men who support Trump and drink a lot of booze, was arrested on January 4 for burning a BLM flag purloined from Asbury United Methodist Church in Washington, D.C., in December of 2020. At the time of his arrest, he was found with two semi-automatic magazines with the “Proud Boys” logo on them, which he claimed he was selling. The magazines were unloaded and Tarrio was unarmed.

Superior Court Judge Harold Cushenberry came down hard on Tarrio and sentenced him to roughly five months in prison, two months longer than prosecutors had asked for.

“Mr. Tarrio has clearly — intentionally and proudly — crossed the line from peaceful protest and assembly to dangerous and potentially violent criminal conduct,” the judge said.

Tarrio told the court he was “profusely” sorry for his actions, referring to them as a “grave mistake.”

“What I did was wrong,” Tarrio said during the videoconference hearing.

Fact-O-Rama! Though leftists consider the Proud Boys to be a group of “white supremacists,” Tarrio, their leader, is of Afro-Cuban descent.

After his January 4 arrest, Tarrio was ordered to stay away from Washington. Law enforcement later said Tarrio was picked up in part to help quell potential violence.

Was anyone from antifa or BLM arrested and sent home BEFORE a riot?

Rev. Dr. Ianther Mills, senior pastor of the church, laid it on thick in court, telling the judge it was an “act of intimidation and racism” that caused “immeasurable and possibly irreparable harm” on the community.

“His careless act of violence and hatred, targeted at a congregation of individuals with a lived history of social and racial injustice, had the presumably desired effect” she said. “Asbury was forced to reckon with the very tangible evidence that we continue to live in a world where people radicalize hate based upon race and skin color.” The pastor didn’t mention BLM burning Washington D.C. last summer.

The FBI has been “valiantly” chasing January 6 protestors, while ignoring other, more dangerous enemies, such as Antifa, BLM and Chinese spies. Choosing instead to track down families, and senior “insurrectionists” that wandered into the capitol for a selfie.