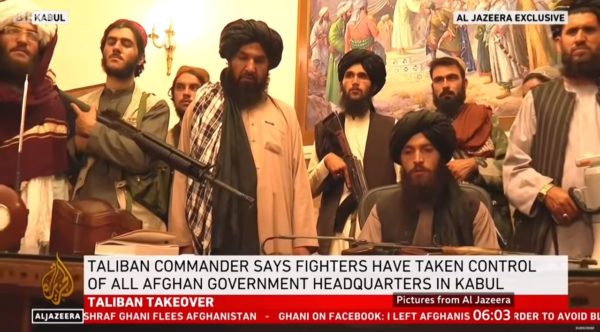 The Fall of Afghanistan is a topic of a myriad discussions at the moment as the nation the United States occupied for 20 years during the Global War on Terror crumbled and fell. The Afghan Army and Police forces were swept aside by the resurgent Taliban and it became clear that the efforts of the United States to train a self-sufficient security force had failed.

The Taliban now controls the declared ‘Islamic Emirate of Afghanistan’ and as part of that declaration begun confiscating private arms. Their claim is that the need for those private weapons to defend their owners is gone now, the Taliban will protect everyone… as they begin a likely long and bloody reprisal campaign. Not everyone who needs to get out is going to get out, and with private arms being taken by the returned Taliban regime there will be no recourse beyond torture and death for any the Taliban decide to act upon…

Alarming reports are emerging from Afghanistan that Taliban insurgents now controlling the capital city of Kabul are “collecting weapons from civilians” should underscore why so many Americans fight to protect their Second Amendment rights.

Reuters broke the news that an unidentified Taliban “official” justified the gun sweep with this explanation: “We understand people kept weapons for personal safety. They can now feel safe. We are not here to harm innocent civilians.”

It is not reassuring that the report came at the same time The Sun was reporting, “The Taliban’s reign of terror has begun as fighters are reportedly going door-to-door with a kill list and women face torture & execution under brutal new rules.”

The story quoted Radio Free Europe journalist Sayed Mustafa Kazemi, who reportedly tweeted, “Taliban started door to door search looking for govt officials, former police & security forces members & those who worked for foreign countries NGOs or infrastructures in Afghanistan…At least 3 journalists’ houses were searched in the last hour. Kabul is now becoming deadly. This is a game changer for us all.”

In a video posted on YouTube by Crux, armed Taliban fighters can be seen detaining motorists and searching him for weapons.

Right or wrong, many gun rights activists believe that’s the kind of scenario some extremist anti-gunners in the United State would like to see played out in American neighborhoods.

The fight in this country to defend the Second Amendment from constant erosion by the gun prohibition lobby and their allies on Capitol Hill and in the White House has gathered momentum during the past seven months of Joe Biden’s presidency. But Biden’s gun control crusade may have been derailed, at least for the time being, by his debacle in Afghanistan.

Alan Gottlieb, chairman of the Citizens Committee for the Right to Keep and Bear Arms—the grassroots gun rights organization often overshadowed by its sibling Second Amendment Foundation—told Ammoland News the public relations disaster now facing Biden over the Afghanistan situation just might keep the administration distracted from guns for the foreseeable future.

He said Biden has “other problems he’s got to worry about,” and that could include the negative reaction to his national address Monday evening during which he attempted to defend his withdrawal decision. Critics called his remarks “disingenuous” at best, and a former assistant Defense secretary under Ronald Reagan told Fox News Biden “has made a terrible mistake.”

That official, Francis “Bing” West, summed up Biden’s remarks thusly: “I was struck with how defensive [Biden] was, almost angry that this could be happening because he’s so much in the right. He’s not in the right and he didn’t tell the truth.”

However, Biden recently did reveal the truth about his desires for gun control, during a CNN Townhall meeting when he admitted, “The idea you need a weapon that can have the ability to fire 20, 30, 40, 50, 120 shots from that weapon, whether it’s a, whether it’s a 9mm pistol or whether it’s a rifle, is ridiculous. I’m continuing to push to eliminate the sale of those things…”

The comment is now the centerpiece of a new CCRKBA 60-second message now airing on several national cable networks.

“Joe Biden’s spinmeisters in the White House and the establishment media will not be able to walk this back,” Gottlieb said in a prepared statement announcing the new televised campaign. “That horse has left the barn and no amount of clarification or obfuscation is going to clean up his mess. Biden’s only mistake was that he accidentally told the truth about his intentions, and CNN broadcast it live. By his own words, he has confirmed everything we have warned about for months.”

But now Gottlieb and other gun rights advocates may have an equally powerful example of what American gun owners have been warning about for decades. Repressive regimes invariably try to disarm the people under their control.

Reuters noted that Saad Mohseni, founder and director of the Moby group media company and resident of Kabul, tweeted that Taliban soldiers entered his compound, inquired about the weapons of his security team, and “collected govt issued weapons.” Moby Media group is, according to Wikipedia, the largest media company in Afghanistan.

Taliban soldiers inside our compound in Kabul. So far they are polite, enquiring about our weapons (of the security team). They are collected govt issued weapons. They have also agreed to keep the compound safe pic.twitter.com/vlqHLAvtDL

Is that similar to a “gun buyback” in this country without an exchange of cash?

Is the Sun report about door-to-door searches just alarmist fiction? Is Reuters being misled about gun confiscations? Time will tell, probably sooner than later.

Gun confiscations are never a good sign. In this country, anti-gun politicians including Vice President Kamala Harris have talked about “mandatory gun buybacks” which are described as “compensated confiscation” within the firearms community. Former Democratic presidential candidate Beto O’Rourke famously threatened to order the confiscation of modern sporting rifles—erroneously identified as “assault rifles”—during a debate in Houston, Texas about three years ago. It is widely believed that remark led to his campaign’s collapse.