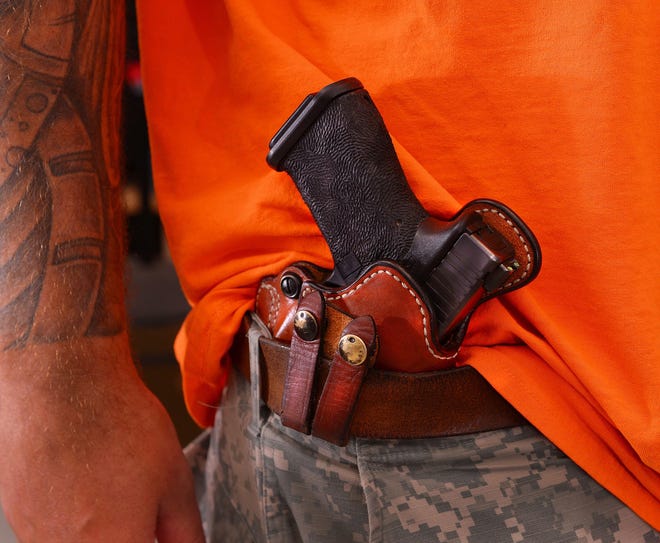 South Carolina’s handgun laws have just changed, and local citizens seem to have mixed feelings about the new guidelines.

South Carolina’s “Open Carry with Training Act,” or H. 3094, took effect on Sunday, Aug. 15. The act will allow South Carolinians to carry concealable weapons, like handguns, openly with a training permit. The bill was passed by the S.C. General Assembly in May.

To commemorate the occasion, S.C. Gov. Henry McMaster, a Republican and staunch 2nd Amendment defender, along with Lt. Gov. Pamela S. Evette and members of the General Assembly, held a ceremonial bill signing on Friday, Aug. 13, at the Palmetto State Armory in Greenville, S.C.

Rep. Bobby Cox, R-Greenville, the lead sponsor for the bill, said that the bill was signed in Greenville because it’s a pro-Second Amendment area, where many citizens believe in responsible gun ownership, he told The Greenville News.

Cox said that several of the neighboring states had already adopted versions of this open carry law and that South Carolina passing legislation was “long overdue.” He added that this was a measure towards making South Carolina a “Second Amendment sanctuary state.”

“It’s a proven policy that’s been proven throughout the state,” he said. “It doesn’t turn a state in to the Wild Wild West.”

Gov. McMaster said that this measure was put in place to act as a deterrent to fatal gun violence in the state. In 2019, South Carolina had the 8th highest death rate in the U.S. in terms of firearm-related mortality, according to Center for Disease Control data.

Here’s what to know about the Open Carry with Training Act that took effect Sunday, Aug. 15:

► Allows holders of a concealed weapon permit to carry a handgun openly.

► Keeps in place requirements that a permit holder be 21 or older, take eight hours of training and pass a background check that includes fingerprinting.

► Eliminates the $50 fee for obtaining a permit.

► Continues to allow businesses and private property owners to prohibit firearms, whether concealed or openly, provided the ban is clearly marked by signs at the entrance.

► Allows church officials who hold a permit to carry a handgun openly or concealed on school grounds when the property is leased by a church and during official church activities.

The law does not allow open carrying of handguns without a permit.

S.C. Representative Shedron Williams, D-Hampton, said that he is an advocate for the right to bear arms, if the person is properly trained and certified, adding that all weapons should be purchased legally and registered.

“I’m not against individuals processing a weapon if it’s done right,” Williams said. “I have  weapons, lots of them, and they are all registered, and I am a concealed weapons permitted carrier. I ask that the citizens in the district, and throughout South Carolina, use good judgement and consider true citizenship and solid policing.”

However, not every 2A supporter and gun owner is in agreement with government officials.

“I think it’s the worst idea they have ever had,” said John Florence, a licensed CWP Instructor and former law enforcement officer. “Part of the beauty of the CWP program is that, when a bad guy walks into a room, he doesn’t know who has a gun and who doesn’t. Now, with guns on full display, he knows who to shoot first.”

Florence also had concerns about the law’s lack of requirements for holsters or retention training for gunowners. Double retention holsters, such as Level 1 or better, are more secure than “a ten dollar holster from Wal-Mart,” he said, otherwise “people can easily take the gun away from you.”

Will Hutto, Retail Manager at ACE Hardware in Hampton, which sells firearms and ammunition, said that he doesn’t think the law will have any impact on the firearms retail business or on public safety.

“I’m a firm believer in the Second Amendment and I feel like law-abiding citizens do have the right to protect themselves, their families, and their property,” Hutto said. “But I hope that people will do some research before they strap on a pistol and hit the street.”

Hutto added that the law primarily benefits people who already have a CWP, and can prevent people from facing prosecution over something as simple as a shirt riding up and exposing a weapon in public.

“I personally would never open carry,” he added. “I feel like it puts a target on you. I’d rather the bad guy have to put some thought into who might be carrying and who might not be.”

– The Open Carry with Training Act does not change the law that applies to non-CWP holders. Rather, it merely changes the way a CWP holder can carry a handgun in public in South Carolina.

-The Open Carry with Training Act also does not change where a CWP holder can carry in South Carolina, nor does it change the right of a public or private business or employer to post a sign prohibiting or allowing the carrying of a concealable weapon by a valid CWP holder.

Meanwhile, law enforcement officers around the state have been watching a training video and undergoing other protocols to prepare them for handling new situations as it becomes legal for residents who have a concealed weapons permit to openly carry a gun in public.

Another scenario, he explained, shows what police should do when the person declines to show them the permit. Then police can tell them that they are violating a law, he said.

The police can only approach and stop a person if they have “reasonable suspicion” that they are engaging in criminal activity.

“Simply walking down the road and just because you’re in a high crime area doesn’t mean reasonable suspicion,” he said.

Devyani Chhetri of the Greenville News, along with Bob Montgomery of the Spartanburg Herald-Journal, contributed to this report.