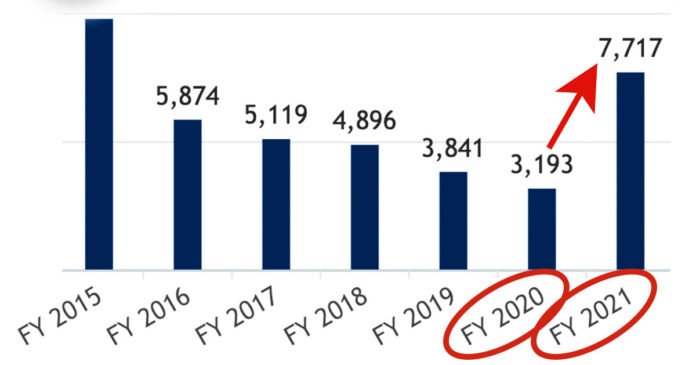 Over the past year, Kansas’ attorney general’s Concealed Carry Licensing Unit has received a large increase in new applications. Between July 1, 2020 and June 30, 2021, 7,717 applications came in – a rate that’s more than doubled the previous fiscal year.

This licensing program began in 2006 with 2015 being the year Kansas allowed concealed carry without a license. Since then, most people in Kansas already with licenses have chosen to keep them active, additionally with Kansas concealed carry licenses currently being honored in 40 states.

There has also been a reduction in the application fee beginning in 2022 by the Kansas Legislature. They also have authorized a new provisional license for 18-20-year-olds.

With over 81,000 active licensed concealed carriers in Kansas, it is great to see more and more law-abiding citizens expressing their 2nd Amendment rights.

Especially with how the current government has handled things in terms of gun rights, it has never been a better time to make sure we protect ourselves before the process of even doing so legally can and/or will be more difficult.

The only hope with these increasing numbers of concealed carry owners both new and old is that they stay on top of training with their weapon(s). Additionally, being cognizant of situational awareness and proper self-defense in terms of local listings is always beneficial.

As a reminder for any other current concealed carriers, is your license set to expire soon? Although some more states now allow permit-less carry, having a license can still help with reciprocation in other states. Let’s make sure we are wary of that as it does not hurt to get them renewed.