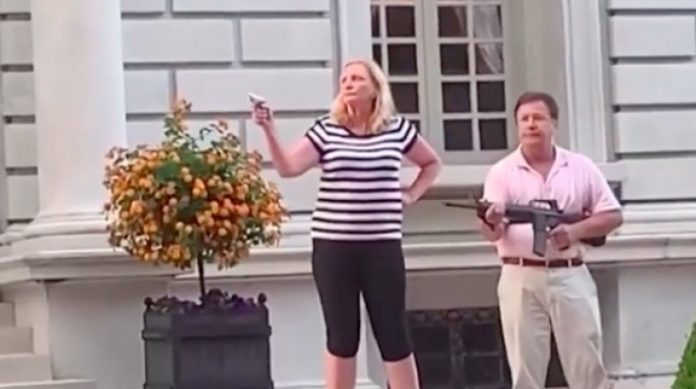 The ‘Cul De Sac Commandos’ as parts of the internet dubbed the middle aged McCloskey’s, both lawyers, went viral as they walked out onto their lawn armed with a small handgun and an older AR-15 style rifle. The couple were confronting a BLM march that was moving toward the mayor’s residence at the time, passed through the closed community where their protest had no authorization to go on their march. This trespass prompted the McCloskey’s to emerge from their home armed to discourage the protesters from committing any of the more riotous actions that had occured in other cities during similar actions.

According to reports, the Missouri lawyer couple was pardoned by their state’s governor.

“Mark McCloskey has publicly stated that if he were involved in the same situation, he would have the exact same conduct,” said the McCloskeys’ lawyer Joel Schwartz. “He believes that the pardon vindicates that conduct.”

The case was contentious, to say the least, as people quickly chose sides on who was right and who was overreacting or biased. The result was yet another scene in macro of those portrayed as privileged against those portrayed as oppressed. Reality is a stranger, dirtier, and more complicated mess than any one headline however, so whether or not everyone involved had a point and everyone involved may have been somewhere in the wrong is probably also true.

Such is the complexity of world events.

But the McCloskey’s, two people who just wanted to make sure their house didn’t burn like they had seen elsewhere around the nation, are currently in the clear. Whether it stays that way is mostly dependent upon someone or some group looking to make a political statement or not and whether or not they stay quiet (not likely as Mark McCloskey is joining political races) or keep themselves in the political and public media light.