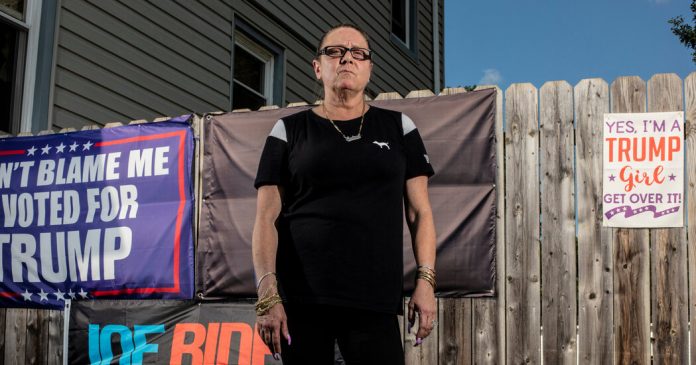 A New Jersey woman can leave up her banners after a ruling that the American Civil Liberties Union hailed as a victory for free speech.

This opens the NY Times piece [linked] covering an ACLU backed suit to keep the banners up. Are they blunt and vulgar? Sure, but they’re nothing that hasn’t been said about the previous administration in public forums across the nation too.

Back to the NYT,

Andrea Dick’s political banners that contain a vulgar term to express her dissatisfaction with President Biden can remain hanging on her fence in a New Jersey suburb, a court ruled on Tuesday.

The decision came after the town, Roselle Park, agreed to dismiss an underlying ticket and its order for her to remove three signs that included the crude four-letter word, which were thought to violate a borough ordinance against obscenities.

Last week, a municipal judge had rejected her claim to a First Amendment right to hang the political banners, prompting her to appeal the decision with help from the American Civil Liberties Union of New Jersey.

As she should. Obscene it is, but being that it is political speech and not something directed against a neighbor, or just a general obscenity, it has protected status.

Town officials said they had acted because of complaints from residents upset that their children had to view such coarse words in plain sight.

Why are we still using this argument in 2021… Seriously… Children are in no way protected or unaware of so called ‘Adult Language’ and haven’t been since shortly after the information age kicked into full swing. Why are we pretending vulgar language doesn’t enter politics the way it enters everything else?

“I feel amazing,” Ms. Dick, 54, said after the Superior Court of New Jersey dismissed the claim against her mother, who owns the single-family home about a 40-minute drive from Times Square.

It had been a harrowing week.

Ms. Dick said she had gotten hostile telephone calls and at least 20 pieces of hate mail postmarked from far-flung corners of the country, including California, Texas, Maryland, New York and North Carolina.

I do wonder where people find the time to do this

On Monday, a box of phallic-shaped candies arrived by mail that alluded to her surname. Fines of $250 a day had also begun accruing starting Thursday.

Actually I know what service this was, and it is funny. Fair play you might say. They aren’t toxic.

The mayor, Joseph Signorello III, called it a “moral loss” for the borough.

“Those signs are offensive, and were I a neighbor, I would be offended,” said Mr. Signorello, a Democrat.

“You cannot legislate decency,” he added, “and I think that’s a sad reality.”

And there… right there, is why we have lost decency in political policy discussion. The belief that you should be able to legislate somebody else’s lifestyle, opinions, and decisions into your version of ‘decency’ is contrary to freedom of expression and thought in every conceivable way.

It isn’t a sad reality, it is the only supportable position if freedom of expression. Especially when it comes to speech involving politics. This isn’t a loss for the community, it is a continuation of a political reality we are about a decade or so deep within. Blunt and vulgar political expression has been accepted as normal by both sides now. And one crying foul when it is their candidate/President under fire when they were all aboard the vulgarity train when it was the one they didn’t support in office is just the most basic and annoying hypocrisy.