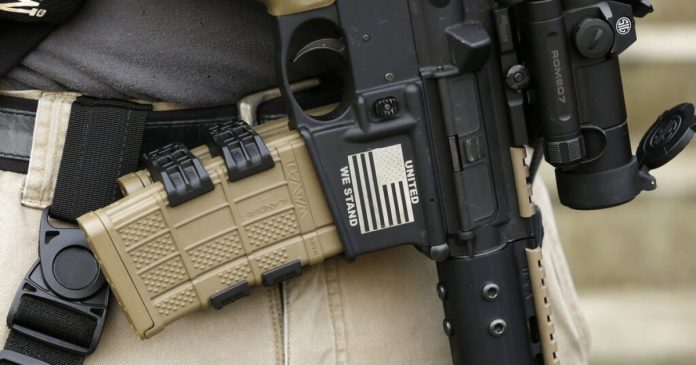 September is coming, the period to comment on the ATF’s redefinition of ‘Braced Firearms‘ is coming to a close. If you have not commented, be sure to.
For those who do not know, the pistol brace was developed to aid a veteran in firing an AR type pistol. It is ultimately a device that makes firing an AR pistol, especially for those with disabilities, easier and safer. The Biden administration’s ATF is looking to tax everyone who owns one or turn them into felons for no better reason than they think they are missing out on the $200 tax they could collect if they were NFA items.
It’s a money grab, a steep one if the estimates are to be believed (they vary widely by the way, another reason the administration shouldn’t be trusted is they can’t even ballpark the number of braces in circulation), but if the higher estimates are to be supported it could be a $100,000,000 money grab easily.

From The Washington Examiner,

With a September deadline looming, several veterans and GOP leaders called on gun advocates on Tuesday to urge the administration to drop its plan aimed at AR-15-style “pistols” fitted with braces that make the firearms easier to shoot, especially for the disabled.

“The Biden administration’s ATF is attacking our Second Amendment and attacking our veterans,” said North Carolina Rep. Richard Hudson of the gun law change pushed by the Bureau of Alcohol, Tobacco, Firearms, and Explosives.

Hudson has put disabled veterans at the front of his campaign to kill the ATF effort and featured several at a press conference on Tuesday.

One, Army veteran Rick Cicero, injured in 2010 by an IED in Afghanistan, said the brace helps him steady the gun. He has since started teaching disabled veterans how to use it.

“That brace is the foundation of everything I do because I can take someone who has limited strength in their hands or is missing digits and give them confidence and the skills and capability to grasp a firearm again and get them back to the things that were such a part of their life,” he said.

The ATF, in its second try to regulate highly popular AR-style pistols, claims that the adjustable brace effectively turns the gun into a short-barrel rifle, and those are subject to a $200 tax and a long background investigation of several months. If the effort is approved, it could lead to millions of legal gun owners facing fines and jail if they don’t pay the tax and register the weapons.

What this move really highlights is the futility of the NFA. The utter irrelevance of the 1934 law when it comes to keeping ‘unusual’ weapons out of the hands of criminals because they are somehow only suited to criminal intent (a ridiculous premise. Firearms do two things, either work or don’t work.) The NFA effectively banned firearms that are best suited for home protection because of the limited spaces indoor circumstances offer, limited devices that protect hearing, and removed machineguns from easy public circulation as if automatic fire is somehow magnitudes more lethal than semi-automatic.

But that hasn’t stopped this rule from being proposed and pushed to the mandated public comment period. So comment away if you have not, at Regulations.gov.