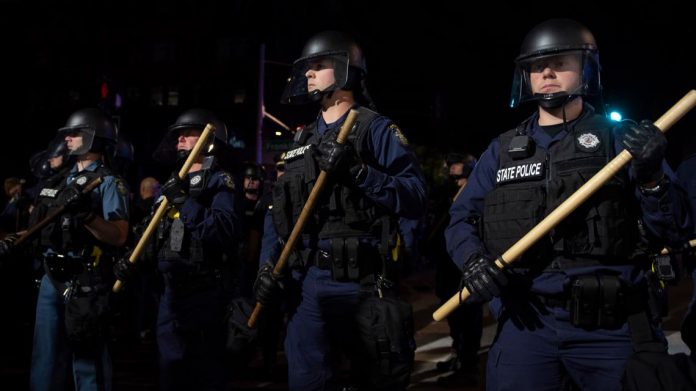 The protests surrounding the now convicted murder of George Floyd in Minnesota sparked responses across the nation. Those responses from law enforcement varied widely from the hands off approach in Seattle that resulted in the CHAZ (Capitol Hill Autonomous Zone), to far more ‘no nonsense’ response like those in Detroit, Michigan where the DPD Chief essentially left it as, ‘you can be angry, you can be mad, you can shout it and scream it and wave your signs and you should be heard, but mess around and find out’.
Portland Maine released their independently conducted review of the police response to the Floyd protests and riots.

Portland police held a press conference to answer questions about the findings of their independent review of their response to a Black Lives Matter protest.

PORTLAND, Maine — The outside firm the city hired to investigate to Portland Police Department’s response to a Black Lives Matter protest in June 2020 has completed its report, and concluded the response was “appropriate,” and even “restrained.”

Clifton Larson Allen LLP was hired by the city in February 2021 to investigate the June 1-2 protest that was held in the wake of George Floyd’s death. The protest ended in 23 arrests and damage to businesses in downtown Portland. The Cumberland County District Attorney later said the charges against the people arrested would not be pursued, citing insufficient evidence.

The protest, which was held just one week after George Floyd, 46, died in Minneapolis as a police officer knelt on his neck despite his cries that he couldn’t breathe, started peacefully and became increasingly tense as night fell and police clashed with protesters in the streets.

Police in riot gear fired pepper spray into the crowd, and reports say officers advanced up Franklin Street after a cargo truck drove through the crowd. Protesters pushed back, and things divulged, at times, into chaos.

The firm found, however, that in many cases, officers showed restraint as events from the largely peaceful protest turned more hectic.

“Even under the best of circumstances with advance scheduling and coordination, policing protests can be difficult,” the firm said in its report.

The firm noted the protest was made up of a mix of peaceful demonstrators and outliers who clashed with police, throwing water bottles towards officers and inciting police reaction.

Police issued “orders to disperse” for more than an hour due to “riotous” conditions and then used pepper spray in pepper ball and aerosol canisters on protesters throwing objects at police. The outliers were met with calls from demonstrators attempting to keep the protest peaceful to stop antagonizing police.

It was this “second tier of demonstration” that officers’ actions were focused on, the firm concluded.

Compared to police departments’ response to similar protests across the country, the firm said Portland’s “differs greatly, in a positive manner.”

More at the link.

It is likely we see more of these reports emerge from various departments nationwide, as police in general tend to do their jobs with a professional decorum and actually keep the peace. That isn’t true in all cases, however it is the norm that police forces strive for. With that, and with independent review, the nation can continue to identify the real friction points in community policing policies as opposed to reactionary decisions made in response to high profile events.