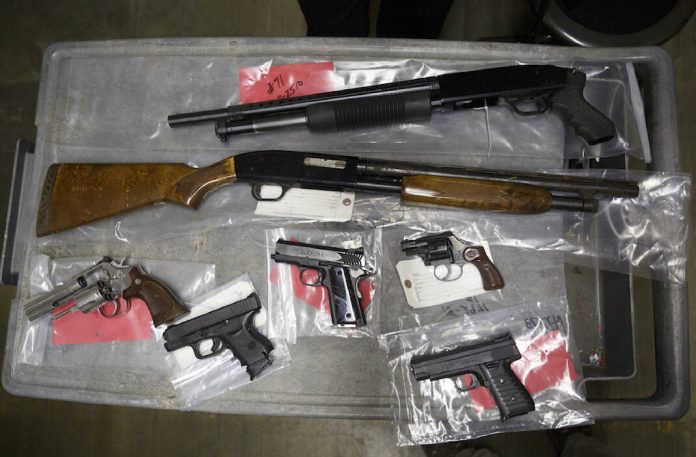 According to the police in Chattanooga, they will be destroyed…
While this isn’t an uncommon policy, it is one that destroys valuable property that could be used as an additional revenue for departments instead of increasing their spending in order to take the time and effort to assure firearms are inoperable.
While is may be ‘bad optics’ to the under informed, a police department that auctions property is being both fiscally conscious and completing on of the least time intensive ways of dealing with property that is no longer in the ownership of the individual it was taken from when that person came into custody.
Firearms should be no different than vehicles, firearms seized and then auctioned off after complete background checks or to FFL’s (Federal Firearm Licensees, licensed businesses who deal in firearms) who will then complete background checks on those firearms in good enough condition to sell safely, reducing the workload on already work loaded officers.
Auction guns does not put them ‘back on the streets’, it puts them into the lawful possession circles again where they under background check lock and key.
However…

The Chattanooga Police will not be auctioning off guns that have been seized or confiscated.

The question came up in the days leading up to the Fourth of July weekend, when advertisements invited people in the region to a “Guns, Buns and ‘Cue” sale that Saturday “celebrating our 2nd Amendment rights” at a private auction house behind the Police Services Center on Amnicola Highway.

Just days before, Tennessee’s new “permitless carry” handgun law had taken effect, and the auction ad promised that a variety of guns would be available for purchase including “law enforcement confiscated & police seizure firearms and more.”

Guns seized by Chattanooga Police were not part of that sale, auction officials told us, but the company’s managing partner made it clear he hoped to sell the city’s stash of guns in the future, noting the department would soon have a new chief and that he had recently attended a fundraiser for new Mayor Tim Kelly.

Kelly made it plain this week in an interview with the Times Editorial Page that a sale won’t happen. “You’ll not have to write a story about Chattanooga auctioning off its guns,” he said.

We told him we were glad we would not be writing that one.

Showing a bias that all firearms are at some level a problem in society, they praised a labor intensive and costly decision by the police which amounts to shallow ‘we’re helping’ optics by the overused coloquial of ‘keeping guns off of the streets’ where the important angle is keeping the illicit users off the streets.

But that second part is far more challenging than the first. No word on whether or not Chattanooga will stop auctioning vehicles in order to curb car theft and intoxicated driving.