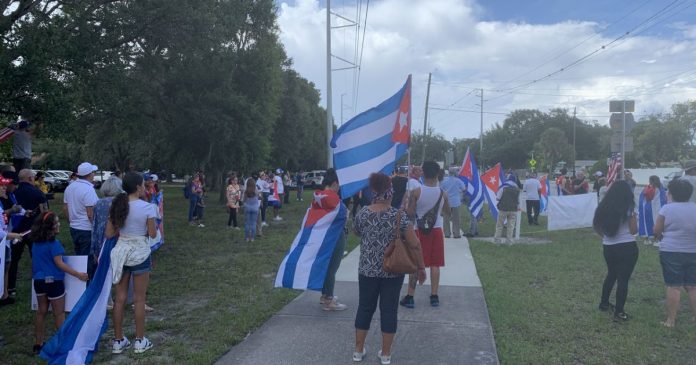 Residents in Tampa with roots in Cuba say the time has come for change.

A short time later, protesters were near Dale Mabry and I-275.

A few of them attempted to march on the exit ramp of I-275 but The Tampa Police Department assisted the Florida Highway and Patrol in redirecting the crowd back off. According to TPD, three people were taken into custody on several charges including battery on LEO.

“The Tampa Police Department continues to support everyone’s 1st Amendment right for free speech. We will continue to work with groups who want to have their voices heard in a safe and secure manner, ” TPD said in a press release.

Tampa has the third-largest Cuban population in the United States.

Rafael Pizano has heard the stories from his father, Robert, about the terror so many experienced in their Cuban homeland.

“My father, one of many men and women here in Tampa who were in Castor’s prisons for many years. They were tortured. They still have the marks on their bodies,” said Pizano.

They are part of Tampa’s Cuban community that is coming out to show support for those fighting for freedom on the island nation.

Eddy Conde said he fled Cuba about seven years ago.

“I have my whole family in Cuba, my mom, my dad, sister, brother-in-law, everybody is in Cuba,” said Conde.

He said the United States gave him freedom and opportunity. He met his wife in America and they have a 3-year-old son.

“To see the opportunity, to develop a life with a family, to grow, to create, that’s the opportunity this country gave us and we are very thankful,” he said.

There have been reports of mass arrests as Cuba’s President blames U.S. trade sanctions for its problems.

But those here in Tampa with roots in Cuba say the time has come for change, and some say that includes the U.S. lifting sanctions.

“If we eased up a bit and allowed them to import all kinds of food products and so forth and if we would Import their tobacco and all of the tropical fruits that for so many years we’ve imported, it would help the people instead of the government,” said Michael Sierra.

Generations have lived under the communist regime, and supporters say they are hopeful change will happen without violence.

“All the families here in Tampa who have family there and have been suffering for so long. They want to show support. And they are filming this and sending it to social media so they can see it over there. They are calling on the phone. They are not only worried, but they are excited because they know that the moment has come,” said Pizano.

The mayor said Cubans helped build Tampa, and the city cares deeply for the county’s future.