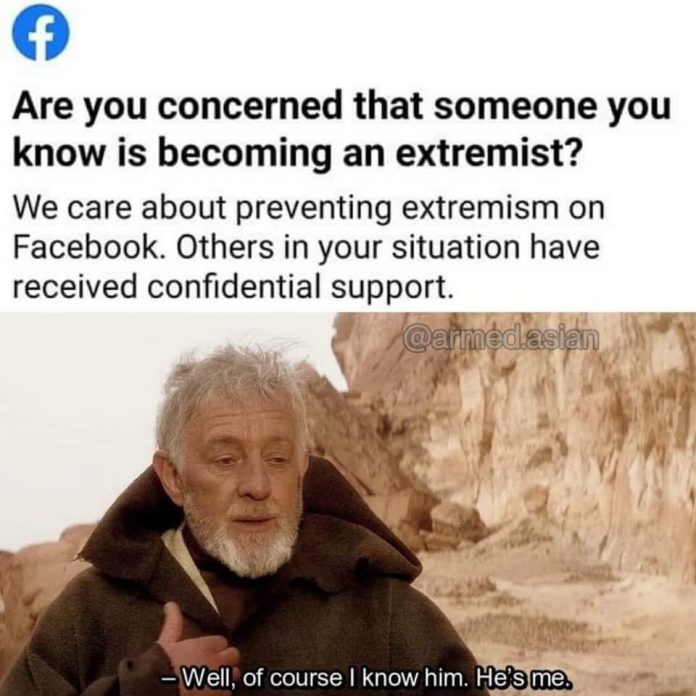 On the list of things that didn’t go how they planned, that probably ranked highly.

The internet, being the contrarian entity that it is, went absolutely bananas with this latest thing that it could mock. But the while it was taken with good if dark humor on the surface… It underscores Facebook’s rapidly impending greatest issue. Censorship is already at the core of Facebook’s problems, their censorship of various topics and professional niches (which isn’t limited to just conservative topics, firearms, and theory that COVID may have escaped a lab) and Reason has a good breakdown,

Efforts against violence are turning into restrictions on ideas.

Some Facebook users have recently received warnings about “extremism” and offers of help for those with acquaintances attracted to “extremist” ideas. It’s part of an international push to discourage and restrict communications considered radical and hateful. While often couched in concern about the potential for violence, this effort looks increasingly like a scheme to narrow the boundaries of acceptable discussion and muzzle speech that makes the powers-that-be uncomfortable.

“Are you concerned that someone you know is becoming an extremist?” asks one of the Facebook messages. “We care about preventing extremism on Facebook. Others in your situation have received confidential support.”

Taken by itself, the messages are somewhat creepy indications that the tech giant doesn’t approve of a subset of its users’ communications, politics, and associates. But the messages—which send those who click through to the company’s Redirect Initiative to “combat violent extremism and dangerous organizations by redirecting hate and violence-related search terms towards resources, education, and outreach groups that can help”—is part of a much larger international program involving dozens of governments and tech firms.

Increasingly big tech and big government are putting their bigs hands on content in order to close off what was once an unfiltered stream of information that had not gotten the ‘Official nod’ from an administration or insiders. This was one of the great lures of social media news and independent news sites using social media. You could track a story through multiple sources and see who was handing onto which facts and which sides were underreporting on what. One of the tactics used by the bigger news networks has always been the lie of omission. If it didn’t fit the narrative you said nothing about it, you never claimed it didn’t happen but simply didn’t report aloud that the event occurred or that detail about the event.

A headline claiming a man was killed by police, for example, may bury the lead that the man was killed in a car crash, during a pursuit, of an armed robbery suspect, and the vehicle was stolen. Those are a great many contextualizing details that can better frame a reader’s ability to objectively evaluate the event and form an opinion.

That window in social media, one of the defining positive traits, is being closed.