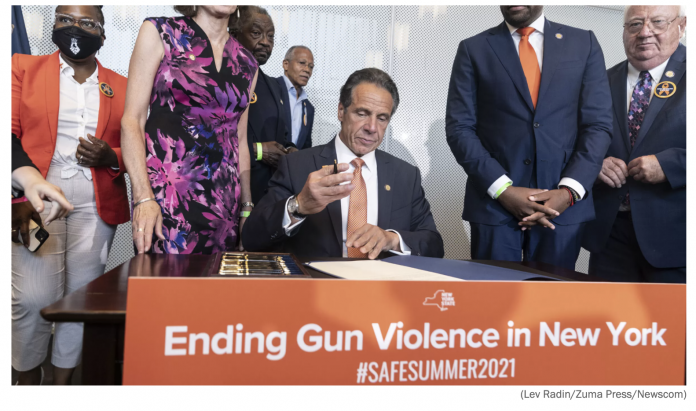 A made up term by a governor who cannot keep his large city (cities) crime at reasonable levels through judicious use police and community servies?

Andrew Cuomo seems to be seeking to prove the concept. He just signed a law that is like in direct conflict with the PLCA (Protection of the Lawful Commerce in Arms Act). Inviting New York residents to sue gun manufacturers, instead of the Governor I don’t know… governing and encouraging ethical law and order within his territory, seems like a massive buck being passed.

But it does support one of the Gun Controllers’ wet dreams of suppressing the 2A without outright ‘banning’ firearms. Just bankrupt whoever makes them for crimes and sins they didn’t commit.

Early in the COVID-19 pandemic last year, New York’s legislature authorized Gov. Andrew Cuomo to issue “any directive” he deemed “necessary to cope with the disaster.” Second Amendment supporters should be thankful that the legislature rescinded that authority a year later, since the Democratic governor yesterday declared that gun violence in New York qualifies as a “disaster emergency.”

Under current law, that executive order, which Cuomo proudly described as “the first-in-the-nation gun violence disaster emergency,” still allows him to “temporarily suspend” laws and regulations “if compliance with such provisions would prevent, hinder, or delay action necessary to cope with the disaster.” Cuomo is using that authority to suspend statutory restrictions on “contracts, leases, licenses, permits or any other written agreements that may be entered into for purposes of mitigating” the emergency he declared. He also is relying on that statute to require that the state’s Division of Criminal Justice Services collect data on “shooting incidents, shooting victims and individuals killed by gun violence” from police departments in certain cities and counties every week rather than every month.

Cuomo says “the disaster emergency allows the State to expedite money and resources to communities so they can begin targeting gun violence immediately.” Although Cuomo yesterday signed a bill that aims to facilitate lawsuits against firearm manufacturers and dealers, his order says nothing about unilateral gun control measures. [Emphasis added]

This is why gun violence keeps getting declared a ‘public health crisis’ or other forms of emergency. It opens up funds. It makes money available that is sitting in other piles for other purposes, usually natural disasters and weather related emergencies. This money can then be accessed and spent, usually with very little in the way of spending oversight because it is an emergency and that would get in the way.

It may be subject to audit later… eventually… possibly. But once it is spent it is spent, and the government is pretty atrocious at keeping itself accountable, a fact that they count upon.

Maybe that’s because Cuomo no longer has the statutory power to issue “any directive” he thinks is appropriate to deal with an emergency he declares. Or maybe it’s because New York already has some of the strictest gun laws in the country. Among other things, the state requires a permit to purchase a handgun; mandates background checks for all firearm transfers except those involving immediate family members; bans the open carrying of firearms; prohibits concealed carry for all but a select few residents; bans the manufacture, transportation, or possession of “assault weapons”; prohibits magazines that can hold more than 10 rounds*; and authorizes court orders barring people from possessing firearms when they are deemed a threat to themselves or others.

These laws obviously did not prevent the surge in shootings to which Cuomo is responding. In New York City, police counted more than 1,500 shootings last year, nearly twice as many as in 2019. The New York Times notes that “some 886 people have been shot in 765 incidents this year through July 4.” And although “the violence appeared to ease in June,” it remains “well above 2019 levels.” New York City homicides rose 45 percent in 2020 and climbed further in the first five months of this year. Other New York cities, including Buffalo and Rochester, have seen similar increases in shootings and gun homicides.

Undeterred by the manifest failure of New York’s existing gun controls, legislators last month passed a bill that aims to expand the civil liability of firearm suppliers. Under the federal Protection of Lawful Commerce in Arms Act, gun manufacturers and dealers generally cannot be held liable for crimes committed with their products. That 2005 statute specifies several exceptions, including cases in which a gun supplier “knowingly” violates state or federal law if “the violation was a proximate cause of the harm for which relief is sought.” S.B. 7196, which Cuomo signed into law yesterday, seeks to exploit that exception by authorizing lawsuits against gun suppliers who fail to “utilize reasonable controls and procedures” aimed at preventing unlawful use of the firearms they sell. It defines such a failure as a “public nuisance” and says the state, local governments, or injured private parties can sue violators for damages.

Leave no vague option go unexploited when it comes to crushing New Yorkers’ 2A rights. They get to set the bar of ‘reasonable,’ despite dealers and manufacturers having no meaningful access or control over systems like NICS or how any individual dealer conducts their business. Gun companies possess no more clairvoyance than do government officials (and profess quite a bit less) but their products are still less objectively harmful than vices like alcohol.

So a ‘Disaster Emergency’ of gun violence is basically like ‘Assault Weapon,’ a made up term to frighten people more, over a predicted rise in violent crime in regions that suffered harshly under the lockdowns.