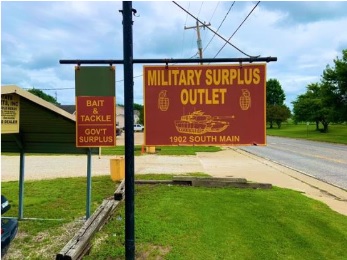 The Village of South Jacksonville is declaring itself a Second Amendment Sanctuary.

The official signing of the executive order will take place at Holmes’ Military Surplus Outlet location on South Main. Holmes decided to close his business after the state passed new gun laws that tightened regulation on retail gun stores. Manker says the ending of Holmes’ business should have never happened: “Over-burdensome gun laws made it too restrictive for him to carry on business. If we don’t stand up to those types of activities that often come from the more progressive-minded wing of our government, then we are going to end up in a bad place. What happened to Mr. Holmes and his stores should have never happened, and yet it did. Here in South Jacksonville, we are taking a stand for Second Amendment rights.”

Manker says violence from major cities are starting to spill over into smaller communities and he wants the village’s citizens to be able to have their right to protect themselves in their own homes: “We see the major violence happening in the City of Chicago, which village residents realize isn’t that far away. We’ve seen spill-over effects from violence coming from larger cities into places like Springfield, Bloomington, etc. I want the people of South Jacksonville to know exactly where I stand on the issue, and that is with the Constitution and with the people. Henceforth, after the Fourth of July, our departments will be prohibited from using taxpayer resources from any type of gun confiscation measures that the state may or the federal government may try and push on the people. We are just not going to take part in it, and that’s what I’m making sure happens with my [executive] order.”