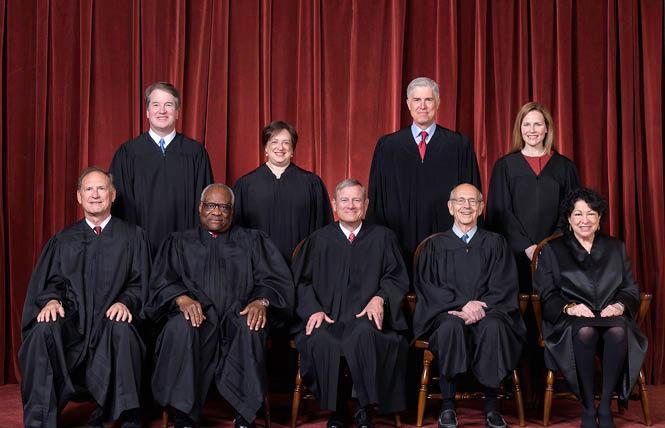 LGBTQ groups were on both sides of the conflict. Why does that matter? Simple, because groups of any affiliation are directly impacted by mandatory disclosures. If you are required to be disclosed by the organization you donate too, that directly affects how you will think about that donation regardless of your other inclinations towards supporting that non-profit.

It is being outed against your wishes, being put onto display (publicly or to a governing group) and that is something that LGBTQ, Conservatives, Faith Groups, and a myriad others have had weaponized against them. If the information is in government hands it could be easily garnered by a FOIA request. All of this violates the option for anonymity and whether or not any individual should be forced to publicly associate with

The 6-3 decision came in two consolidated appeals that pitted conservative religious groups against the state of California over the state’s requirement that charities disclose the names and addresses of their major donors. The groups said the forced disclosure violated the First Amendment rights of the groups and their donors. And they noted that charities that do not comply with the requirement are prohibited from fundraising in California.

Nobody should be outed against their will for charitable donations. We can argue about the transparency of political donations because those are direct spending influences on the elected, but charities whose funding go to a variety of projects and will only touch politics out of necessity deserve, and their donors deserve, to choose for themselves if they are a known donor or not.

“We do not doubt that California has an important interest in preventing wrongdoing by charitable organizations,” wrote Roberts. But he stated there was a “dramatic mismatch” between the state’s stated interest in preventing charitable organizations from engaging in fraud and its actual use of the donor information to prevent such fraud. And Roberts said the law requiring disclosure of major donors “can chill association ‘[e]ven if there [is] no disclosure to the general public.'”

The Human Rights Campaign, the American Civil Liberties Union, and others submitted a brief opposing the California law. Some groups opposed it because of the fear that it would support anti-LGBTQ efforts against subjects like adoptions, charitable services, and other items that religious charities claim under their 1st Amendment rights of conscious.

The solution to that is not giving the government more potentially abusive leverage against everyone. The solution is denying that path of abuse and having Law Enforcement get proper warrants to obtain such disclosures if and when, in a specific case, it is warranted that they need the information.

“A critical corollary of the freedom to associate is the right to maintain the confidentiality of one’s associations absent a strong governmental interest in disclosure,” said the brief. Roberts noted that brief in saying that a wide range of charitable groups opposed California’s disclosure requirement. “The deterrent effect feared by these organizations is real and pervasive, even if their concerns are not shared by every single charity operating or raising funds in California,” wrote Roberts.

During oral argument in April, Justice Brett Kavanaugh also made note of the brief HRC had signed onto in support of the conservative groups’ argument. The brief said, “If the state could categorically demand disclosure of associational information, the ability of citizens to organize to defend values out of favor with the majority would be seriously diminished

California “oversees nearly a quarter of the nation’s charitable assets,” Sotomayor acknowledged that the groups challenging the disclosure requirement “have unquestionably provided evidence that their donors face a reasonable probability of threats, harassment, and reprisals if their affiliations are made public.” But, she added, California’s requirement “is a nonpublic reporting requirement, and California has implemented security measures to ensure that Schedule B [the list of donors] information remains confidential.”

But that could be only until it becomes convenient to out a list. FOIA outed gun owners in New York and put thousands at risk of theft, assault, burglary, and was a violation of their rights of privacy and property. It was done in the name of ‘public safety’ because people allegedly had a ‘right to know’ if there neighborhood was housing a super dangerous gun owner among them. Equating gun ownership to something like convicted child predation.

New York citizens didn’t expect their information to be given to a hostile agenda driven newspaper either, but contentious issues bring rash actions and there are a lot of hostile attitudes towards various organizations by other loose groups and organizations. Name a group that is not getting a level of harassment and hate from others who wouldn’t be put at greater risk by their information being known to the public? What faith and trust has the state of California garnered that makes this feel viable when we see breaches and failures at a near constant rate.

Information for this post was found from the Bay Area Reporter, link below.