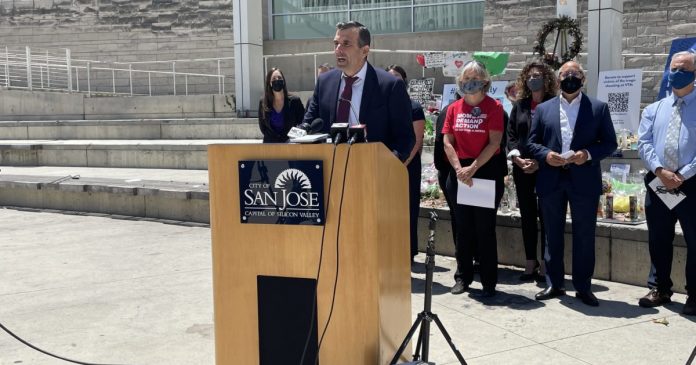 Gun owners in San Jose will soon have to pay for insurance to keep their firearms.

The San Jose City Council unanimously passed gun control measures Tuesday that will require all gun owners in the city to carry insurance and pay an annual fee to cover taxpayer costs related to gun violence, or risk having their guns confiscated. The city attorney’s office will return to the council in the fall with an ordinance for final approval.

These measures are part of gun control reforms two years in the making, an idea introduced by Mayor Sam Liccardo after the mass shooting at the Gilroy Garlic Festival in 2019. Due to the pandemic, the plan was put on hold but has since been reintroduced after the May 26 shooting at a VTA rail yard.

The city already passed one of his plans two weeks ago, which requires all purchases at gun shops to be video and audio recorded.

The exact details of how much the city will charge gun owners have yet to be worked out, although lawmakers stress that fees and insurance will not significantly burden gun owners.

Gun control groups are praising the new measures, while other San Jose residents feel as though the measures are restricting the rights of gun owners.

“The mandatory gun liability insurance puts a financial burden on a constitutional right,” said Owen, a caller who didn’t give his last name. “When a police officer comes on a call and they ask the question, ‘Do you have a firearm? Do you have insurance?’ You have to produce that. Seems kind of ridiculous.”

Councilmember Raul Peralez, a reserve police officer and gun owner, says he’s baffled by those who are against gun reform. He says that gun owners can support control measures and enjoy their Second Amendment rights.

“I likely own the most guns of anyone on the council. I’ve continually been in favor of sensible gun laws,” Peralez said Tuesday. “If paying more is able to offset the negative impacts of guns in society, I will continue to support them while being a proud gun owner. They’re not mutually exclusive.”

Councilmembers Dev Davis and Matt Mahan proposed exemptions to carry insurance if gun owners could prove they can safely handle a gun—either through gun safety training or previous experience, such as being a retired or reserve law enforcement officer. City officials plan to come back in the fall for further research on the exemption.

“I see the value of guns for self-defense, for hunting, for sport and also I’ve seen the research on gun violence,” Davis said. “Research shows that states with tougher gun laws have lower levels of gun violence. I’m not completely sold on the fee and insurance.”

Gun rights groups are expected to challenge the measures in court.

What do you think? Are the San Jose measures too extreme? Email us with your thoughts!