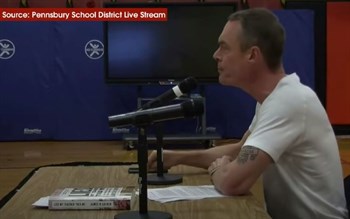 Parents are finding their voices and holding school boards accountable for teaching things like critical race theory and the 1916 Project. School boards are pushing back – but that doesn’t always quell the parental frustration.

The Pennsbury (Pennsylvania) School Board is considering putting restraints on what parents and students can say to them during the comment period at board meetings. The district’s director of equity, diversity and education was trying to censor negative comments questioning those “woke” priorities.

Parent and former school board member Simon Campbell (pictured) was having none of it and reminded the board that they are in America (see video below).

“I’m quoting to you now from the United States Supreme Court,” he emphasized. “This nation is founded on the – quote – ‘profound national commitment to the principle that debates on public issues shall be uninhibited, robust and wide open – and that it may well include vehement, caustic, and sometimes unpleasantly sharp attacks on government and public officials.'”

The presiding officer tried to stop the passionate comment – causing Campbell to explain what the Supreme Court meant.

“I don’t have to be nice to you; nobody behind me has to be nice to you,” the parent continued. “If you don’t like living in the United States of America, then you go move to Russia, Cuba, or China.”

Noting that part of a video recording of a previous comment was deleted, Campbell called for the hammer to fall on the district’s equity director – a call that was met with applause by many in attendance.