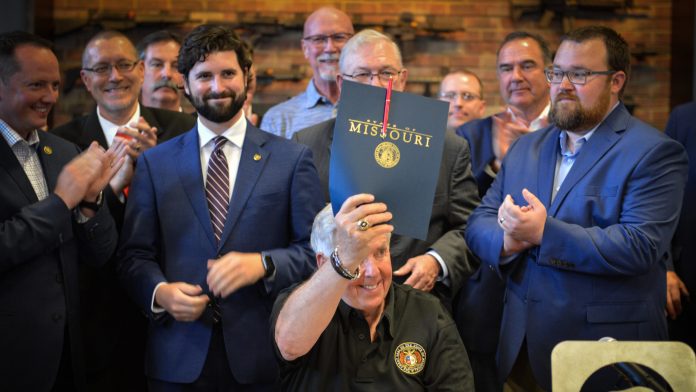 With shootings surging in many places across the country, at least 10 states this year have enacted so-called “Second Amendment sanctuary” laws. They vary state-by-state but most are meant to pre-empt tighter gun control measures that could come from the Biden Administration.

“You’ve had the vice president of the United States get up in an open forum — when she was running for president, if you remember this — and any particular weapon she decided she didn’t like, she was going to come to your house, onto your front door, and take it away,” he said. “Well not in Missouri, she’s not.”

The new law imposes a $50,000 fine on any official who enforces a federal gun law that’s not also a Missouri law, on top of invalidating any federal laws that infringe on the Second Amendment.

Across the state, law enforcement finds itself divided.

A police chief in suburban St. Louis has resigned over the new law. Recently, prosecutors from the state’s attorney general’s office have withdrawn from nearly two dozen federal drug, gun and carjacking cases.

“The language has what they call a chilling effect on local law enforcement cooperating with federal authorities,” says Kevin Merritt, president of the Missouri Sheriff’s Association. He says many of his members are not necessarily against the law, but they are not thrilled about it either. “It opens them up so much for liability based on unknown circumstances,” he says.

Following several lawsuits filed, the law’s fate will be decided in court.