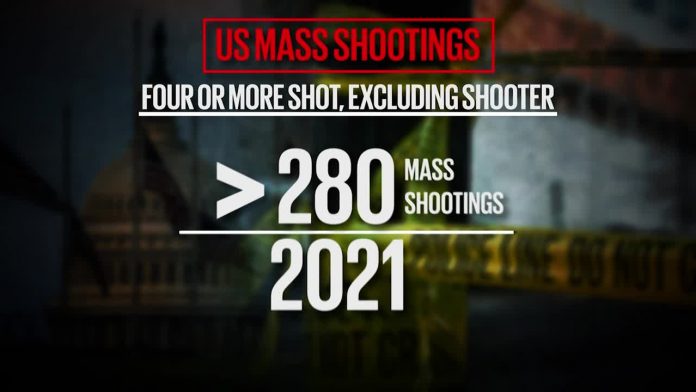 At least by the non-contextualized version of ‘Mass Shooting’ that CNN likes to use. Even then they are finding about double the amount that other sources are reporting.

(KWWL/CNN) — Gun violence reported in six states this weekend, including in Colorado, Illinois, and Arizona, brings the number of US mass shootings to over 280 for the year thus far.

Mass shootings are defined as four or more people shot, excluding the shooter.

According to The Gun Violence Archive, gun violence that resulted in mass shootings across the country has been reported 283 times since the beginning of 2021.

I’m curious, mass-shooting.info has been one of the absolute most accurate sources I’ve seen updated on ‘mass shootings’ by definition, and yet they are only reporting half of what CNN is reporting at 128 incidents as of June 6th…

That is an “interesting” disparity in the numbers, for lack of a better term. To say nothing of the fact that it varies widely from the MAPS report. The Secret Service’s Mass Attacks in Public Spaces report details all the information we garner about the various mass casualty attacks, their suspects, motives, precursor factors, and multiple other aspects trying to give agencies and the public warning indicators to better improve their security situation.

What is abundantly clear from the report is that precursor signs and certain life situations are only correlated, not causative. It isn’t one race, one age, one ideology, or one of anything that is even a remotely good precursor, but stress, isolation, despair, fanaticism/obsession are all signs that someone is higher risk.

Risk is about numbers. Mass shooters may have common factors, but if we make the factor categories vague enough we can start making false causation conclusions from ‘true’ correlations. 100% of mass shooters, mass murders, rapists, and child predators drank water regularly for example, so water must be the source of evil.

Jillian Peterson, Associate Professor of Criminology and Criminal Justice at Hamline University, said, “That type of violence has been surging through the pandemic, and now in 2021 we’re really seeing those numbers rise. And we can think about how the pandemic has increased stress, increased frustration, added to things like job loss and trauma and isolation, and we know all of that has an impact on gun violence.”

Not just ‘gun’ violence. Violence, survival responses, the recognition that society is fragile and that people are panicky animals who will make destructive decisions out of fear. Violence increased in a year where we took away work, we locked people at home, we gave them taciturn permission to be uncivil and settle their scores and are now surprised when they are doing so.

Some law enforcement agencies blame the rise in shootings on criminal justice reform which may be letting too many violent criminals back on the streets. Others blame it on police reforms that they say make it more difficult for officers to do their jobs.

Both are contributing factors. BOTH. We have given taciturn permission, removed consequences, drastically increased life stresses, and are somehow still surprised when the pot boils over…

In Iowa, the last mass shooting took place in Sioux City on January 1, 2021, at a house party where three gunman with AR-15’s killed one person and injured four others.

Oh, there it is! The AR-15 did it. Not the long standing grudges of rival violent factions. Makes perfect sense.

In April, Governor Reynolds signed the ‘constitutional carry’ bill that will go into effect July 1, and stands by her belief that the consequence of committing a class D felony, by selling guns to persons who are not allowed to own one, will be a strong enough deterrent to curb gun violence in Iowa.

“Today I signed legislation that protects the 2nd Amendment rights of Iowa’s law-abiding citizens while still preventing the sale of firearms to criminals and other dangerous individuals. This law also takes greater steps to inform law enforcement about an individual’s mental illness helping ensure firearms don’t end up in the wrong hands. We will never be able to outlaw or prevent every single bad actor from getting a gun, but what we can do is ensure law-abiding citizens have full access to their constitutional rights while keeping Iowans safe.”

Thanks, Governor Reynolds… very cool. Instead of pursuing criminal charges that might make sense, like ‘Violent Felon in Possession’ and making those penalties stick, let’s keep chasing the rabbit down the rabbit hole of unenforceable legal additions that will only ever be dragged into a case when its convenient.