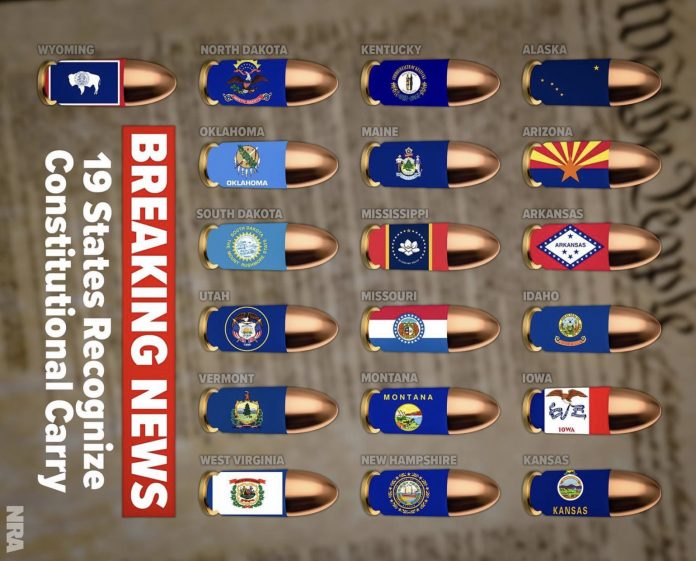 With the recent addition of Iowa to the list, nineteen of the United States recognize their citizens constitutional right to keep and to bear arms, to protect themselves and their community. They see that right as inherent in their residency within the state, barring no prohibiting criteria such as being a minor, a felon, or otherwise adjudicated a prohibited person.

This is the state the Second Amendment should exist in, a trust of the state that their free citizenry can and will exercise their good judgement in the carry of their personal weapons. And, that should they not do so they will be subject to appropriate penalties for failing to use their firearm in a safe and responsible manner.

That’s it. That should be the agreement. With 38% of the nation going to permitless carry and no permitting or registration beyond the NICS check at purchase, if it were a serious problem we should have seen it at this point. But the facts of the matter are that crime and violence continue to be driven by their own common factors, those of motivation and profitability, and that the amount of firearm prohibition has little influence on motivation or criminal profitability.

California and Illinois lead the nation is so titled “mass shootings” and they both have very restrictive firearms policies. No single prohibition nor collection of prohibitions has curbed the homicide rate nor has it prevented a ‘mass shooting’ in any of these locations. Even using the more restrictive definition under MAPS, California continues to rank as a location for these attacks. It is common for the state to blame its neighbors but that simply holds no water and stinks of laziness on the part of politicos looking to score points, not solve problems.

I am hoping we will see the Constitutional Carry trend continue, as well as see (someday) universal reciprocity at the federal level. Hell, I would even “compromise” on UBC’s if we got national reciprocity and national shall issue carry requirements that didn’t undercut state level constitutional carry.

You know… an actual compromise. Where gun owners would receive a net benefit instead of simply being bludgeoned with a misplaced and ill reasoned morality claim.

However, they would never offer us something that improved the exercise of our rights… that’s just silly. Especially with the current federal administration and their active hostility toward 2A rights outside their limited and weak view of them.