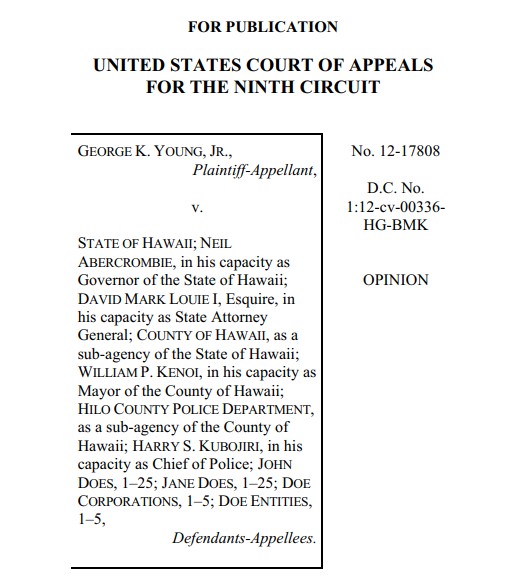 The United States Court of Appeals for the Ninth Circuit covers the western end of the country, including Alaska and Hawaii.

The court has just ruled in a pending case out of Hawaii, and the result is less than stellar. The court, not unexpectedly given their coverage area, has ruled the following:

After careful review of the history of early English and American regulation of carrying arms openly in the public square, the en banc court concluded that Hawai‘i’s restrictions on the open carrying of firearms reflect longstanding prohibitions, and therefore, the conduct they regulate is outside the historical scope of the Second Amendment. The en banc court held that the Second Amendment does not guarantee an unfettered, general right to openly carry arms in public for individual self-defense. Accordingly, Hawai‘i’s firearms-carry scheme is lawful.

Hawaii is an outsider within American political norms, being well outside the continental United States and only becoming a state in 1959. They have their own attitudes and culture, and their own opinion on the islands about the carrying of arms. The case here involves George Young applying for a license to carry in Hawaii in 2011, Hawaii is a ‘May Issue’ state and requires applicants to show an urgency or need to carry a weapon. This requirement has been dropped from nearly every carry application within the United States because it is generally seen as an infringement and a ridiculous requirement that provides no benefit for the community, but Hawaii is one of the few who retains the requirement.

Appellant George Young applied for a firearm-carry license twice in 2011, but failed to identify “the urgency or the need” to openly carry a firearm in public. Instead, Young relied upon his general desire to carry a firearm for self defense. Both of Young’s applications were denied. Young brought a challenge to Hawai‘i’s firearm-licensing law under the Second Amendment and the Due Process Clause of the Fourteenth Amendment. The district court upheld Hawai‘i’s statute.

This likely means a Supreme Court challenge. Remember, this started in 2011 so we have a case that has been fermenting for a decade and still is not done.

There is good news in the text though, the dissent:

Dissenting, Judge O’Scannlain, joined by Judges Callahan, Ikuta, and R. Nelson, would hold that both HRS § 134-9 and the 1997 County regulation destroy the core right to carry a gun for self-defense outside the home and are unconstitutional under any level of scrutiny. Judge O’Scannlain stated that the majority holds that while the Second Amendment may guarantee the right to keep a firearm for self-defense within one’s home, it provides no right whatsoever to bear—i.e., to carry—that same firearm for self-defense in any other place. In his view, the majority’s decision undermines not only the Constitution’s text, but also half a millennium of Anglo-American legal history, the Supreme Court’s decisions in District of Columbia v. Heller, 554 U.S. 570 (2008), and McDonald v. City of Chicago, 561 U.S. 742 (2010), and the foundational principles of American popular sovereignty itself.

Dissenting, Judge R. Nelson, joined by Judges Callahan and Ikuta, concurred with Judge O’Scannlain’s dissent concluding that Hawaii Revised Statute 134-9 violates the Second Amendment. Judge R. Nelson wrote that the majority erred not only in holding the statute facially constitutional, but also in rejecting Young’s as-applied challenge. He also wrote separately to highlight the brazenly unconstitutional County of Hawaii Regulations applying HRS § 134-9, stating that there should be no dispute that any law or regulation that restricts gun ownership only to security guards violates the Second Amendment.

So there are empaneled judges the do recognize the Second Amendment as written and understood and will not let the prevailing local attitude pass unremarked upon. The did not win this opinion but they clearly recognize that Hawaii’s attitude on this is in opposition to the national prevailing attitude of shall issue. With the Supreme Court sitting at a theoretically pro-2A majority of 6 to 3, or 5 to 4 depending upon Chief Justice Robert’s moderate attitudes, we could see a positive resolution on this… eventually.

Until then Hawaii will be allowed to continue curtailing their citizen’s and resident’s carry rights with ‘may issue’ procedures in place. They are also likely to keep patting themselves on the back for their lower than national average homicide rate being based upon their gun policy, and not their geographic isolation, culture, or differing criminal economy.