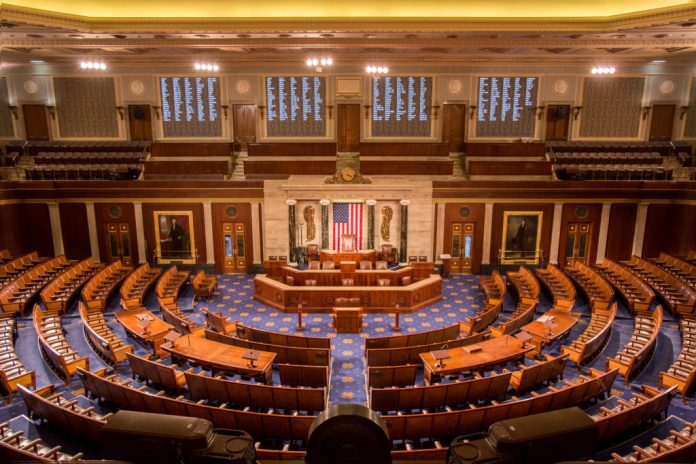 From our friends at DRGO
(from history.house.gov)

[Ed: SCOPE-NY president Tom Reynolds just sent this plain language explanation of this RKBA-punitive bill via email to members. We felt it gives such a clear picture of the bill’s aims that it is important to share it widely. The bill likely will pass the House next week, and the Senate could be where it might be diluted or even stopped. It is cocked & locked, and pointed at the heads of 100 million citizens. It will not be the last.]

SCOPE recently published a list of gun related bills in the House and Senate, with a brief description of each.  HR 8, in the House of Representatives, deserves an expanded explanation.

It is important to note that it covers all firearms, not just handguns.

Under HR8, any transfer, loan or sale of a firearm will have to go through a Federal Firearm Licensee (FFL) with all the associated paperwork and costs.  There are a few exceptions to the bill’s mandate to use an FFL but they fall far short of easing the pain of this bill on gun owners.  To the casual reader, the bill might not seem too extreme but to a knowledgeable gun owner it is extreme and includes many paths to making a law-abiding gun owner into a felon.

As might be expected, the bill seems to be written by legislators who are not familiar with firearms and have probably never been hunting.  The bill’s authors’ understanding of dangerous situations seems to have come from watching TV shows.

HR8 changes the law, through the backdoor, and no one under 21 will be able to legally possess a handgun. Since 1968, existing federal law says FFL’s cannot sell handguns to people under 21, but younger persons can possess handguns that are borrowed or transferred.  Under HR8, all transfers must go through an FFL.  That’s the “Catch 22”; FFL’s cannot legally transfer a handgun to people under 21.  (Gang members like MS-13 and other youthful criminals exempt themselves from this law.)

If you trade a firearm to an HR8 defined close family member*, without going through an FFL, you are as much a felon as if you gave the gun to Charles Manson, (and subject to the same level of penalty). For example, you can’t give your adult son a shotgun to thank him for doing some work on your house, that’s a trade.

You do not have to use an FFL to lend a firearm to someone to hunt, but you must accompany them and never leave their side.  If you leave their side, you become a felon.

You do not have to use an FFL to lend someone a gun to shoot at a shooting range, but you must never leave their side or you are a felon.  If you practice shooting at a non-shooting range, such as a farm, and hand someone a firearm, that transfer would be a felony.  (You farmers who want to teach your family to shoot will have to take them to a firing range and not to the “north forty”.)

One constantly overlooked aspect of gun ownership is crime prevention.  Do you have any reason to believe your life may be in danger: being stalked; domestic violence victim; live in a dangerous area; lots of burglaries in your area? If so, you might want to borrow a gun, in advance of the crime, for prevention and protection. Under HR8, you cannot borrow a firearm, in advance, from someone other than an HR8 defined close family member*.  Once there is imminent threat of death or great bodily harm, you can borrow one from someone else.  Unfortunately, criminals don’t schedule their crimes with the victims so you have to wait until the crime is in process to borrow it from a friend.  (Good luck with that.)

Suppose you want to legally loan a firearm and you are willing to endure the paperwork and cost to comply with HR8 and go through an FFL.  When the gun is returned, you have to go through the same paperwork and cost to return the firearm to its owner.  Under HR8, the return of a firearm that was loaned is treated the same as the purchase of a new one.

The gun grabbers have generally not been successful in direct attacks on the 2nd Amendment but they never stop with indirect attacks that make it more difficult to own a gun.  One way is to make it unaffordable or overly bureaucratic for most people to own or, in the case of HR8, borrow a gun.  Other bills being proposed add costs for insurance policies and mental health exams.  Taken as a whole, these bills would make gun ownership and hunting into rich person’s sports – which is exactly their goal.

Contact your Congressperson and tell them to oppose HR8.

Contact your local Rod and Gun Club and also your local Conservation Society and be sure they understand the implications of this bill.

All DRGO articles by Tom Reynolds