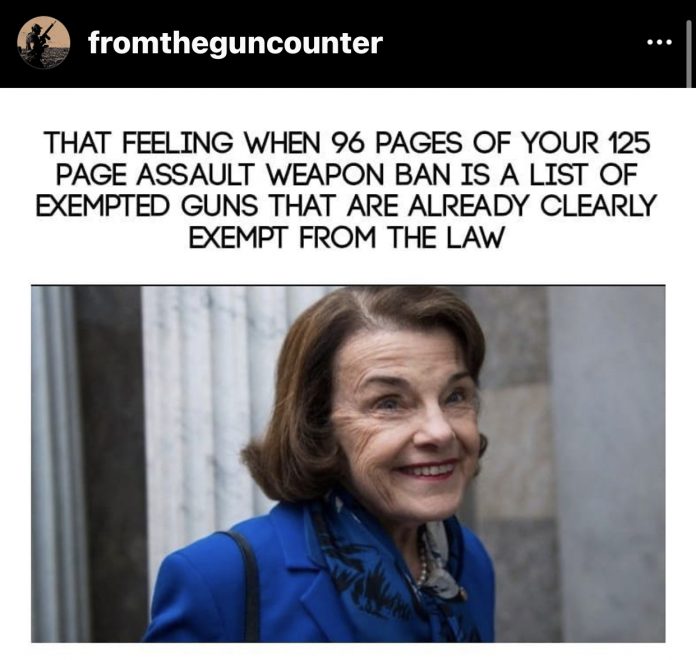 It’s back. Back again.

We knew it would be. Especially with the House pushing through the ‘Universal Background Check’ bills yesterday, the Congress is primed for gun control in a way that they haven’t been in a long time. And with the most anti-gun administration ever elected, they have a shot at running wild with it.

In short, despite how terrible an idea this is for Congress to do in the long term, they could do it anyway because ‘mUh MorAL OuTRagE!’ and other nonsensical appeals to anything not remotely resembling productive policy.

To regulate assault weapons, to ensure that the right to
keep and bear arms is not unlimited, and for other purposes.

And it just gets worse from there. It is an asinine attack on the Second Amendment rights of the citizens, devoid of reason and built on weak appeals to ‘grandfathering’ in the shade of ‘compromise’.

Page 25 through 121 are just a bunch of obvious (and many out of production) gun models. This makes it look like the bill isn’t infringing (at least not that badly) because, “look how many guns you get to keep, everyone!”

This is purposefully contrasted against the shorter, by name, list that covers the offending banned firearms in great swaths of ‘all variants.’ In fact, the list is over ten times the matching list of banned firearms, I’m certain purposefully, to make the list look magnanimous.

It’s the equivalent of banning every truck or SUV beyond the year 2021, because all the ones built before that are still technically around. Then all of the SUVs and pickup trucks need special paperwork in order to change hands in the future, because the massive vehicles make them so much more dangerous. Oh and you can’t sell tires for them.

It’s clear nothing will satisfy until they prohibit ownership entirely. The background checks acts that passed the House, H.R. 127, and now this are just taking on firearm ownership piece by piece.

The greatest sin of the whole bill is its wanton misuse of homicide statistics and “massacres” to push it. Citing not a hint that the homicide rate and violent crime rates continued their decline after the ban was removed in 2004. Meaning the ban was not suppressing crime, at all. Firearms demand is magnitudes higher than ever and the “assault weapons” are the most popular category for new and continuing owners alike, especially since handguns have quietly become ‘assault weapons’ thanks to threaded barrels becoming common drop-in parts.

By Feinstein’s version of what passes for logic, we should have seen a spike again to the rates of the early 1990’s starting in 2004. We didn’t. Her claim that “massacres” are more prominent is a combination of fast and loose data combined with the increased fame factor that massacres garner. A mass public killing is generally not the data they restrict themselves too, they gleefully include domestic slayings and organized criminal activity into the mix. They even omit any mention of whether they filtered this information for just confirmed “assault weapons” incidents, thereby allowing any crimes involving handguns or shotguns to be counted among the “massacres” that they do not define in the least.

The cognitive dissonance of what is and is not cited, what counts and what doesn’t matter, what is relevant information and what is not is maddening to anyone who would genuinely like to continue solving the issues of violence in this country.

It’s the lowest type of statistical and emotional manipulation, just like the “90%” claim.