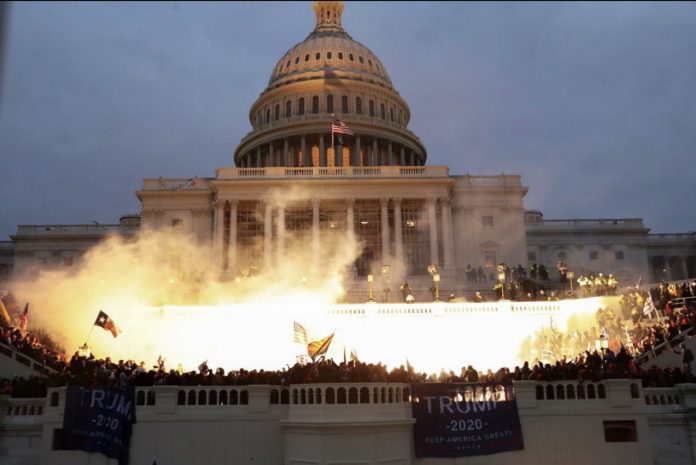 Well, that was one of the spicier days in American politics. There is no total yet on the damages of the Electoral Certification Tantrum of 2021, but from several stills people helped themselves in grand riotous tradition. The amount of security and intelligence damage as well as the physical property damage to the building is probably staggering.

The death toll on the day stands at four.

One woman, shot by Capitol Police/Security. There is video circulating of her attempting to climb past a barricade being defended by an officer with a drawn gun, she is shot once and falls back where the more widely circulated video can be seen. The other three died due to various medical emergencies. It was too much excitement/stress it sounds like and the circumstances at the Capitol Building triggered a lethal medical reaction different for each. No known information at this time on heart attacks, strokes, or breathing issues, perhaps aggravated by the use of crowd dispersal agents like CS and OC.

Be assured that the woman shot and killed will not be listed as killed by Capitol Police in any headline, thereby equating her death to direct action of the protestors. It’s an exploitable inference so why wouldn’t they use it…

Several police officers are reported as ‘injured’ although I don’t have details there on how minor or major.

All in all, it was riot.

What I am most disappointed in this morning is how differently this is being treated than other riots. Why? Because it was the Capitol Building? Because the target of the particular mob’s ire was Congress certifying the election results?

Since when has a mob, a riot, held anything resembling political or ideological nuance? When has it needed anything more than a vague authority figure or group to be mad at in order to act. It didn’t at any point in 2020. Why is this different?

“Keith, this was the election results! It was a direct assault on the democratic process of our Republic.”

And, yes it was. But, you are again ascribing political nuance to an entity that has none. All that group knew, acting as the organism a mob becomes, was that ‘Congress bad! Mad at Congress!’ And all more thoughtful deeper motives, regardless of how well intentioned, well or poorly reasoned, legitimate or illegitimate, were gone. They will be recalled when the mob calms down, when the anger ebbs away.

Some in the mob will believe they had a plan, a purpose, the whole time. Those who have seen that a mob acts as the mob acts and disregards the higher will and moral authority of any individual member for whatever is an easy target, flashy and emotional, will recognize that is a futile thought. There is no higher purpose, only the mob.

So…what did we ultimately witness?

Was it Donald Trump attempting to hold onto power through literal mob rule?

No, I don’t think so. Not with any realistic intent.

Was it Donald Trump using the mob to throw a temper tantrum of sorts? Far more likely.

Given the unknowns and variances in the election in several key states that resulted in his electoral loss, then how vehemently he has held onto them, valid or otherwise, this feels a great deal like the kid at the playground who got tagged out with the ball and then kicked it into a thorn bush before stomping off.

A Balancing of Extremes?

Now that, we absolutely did witness.

Regardless… and let me emphasize that again.. Regardless of where you personally land socially in alignment with any of the movements that devolved into riots this past year, there was going to be a balancing escalation from an opposing faction. It was coming.

We had months of political endorsement and media endorsement of the BLM and Antifa actions to varying degrees. That sympathetic/endorsing variable attitude of the “mostly peaceful” protests from the political left and political left media created a opening for the tactic to be used against them in a reactionary fashion, making them look additionally hypocritical.. as hard as that is to do.

But now it has been done.

The factions currently screaming that DC yesterday was totally unacceptable and threated the safety of the Republic (or as they would say, “our Democracy”) but did not see the similar threats of mob rule/acts in June when DC was also on fire with a different riot (or vice versa, seeing this as good and that bad) are letting their personal biases and level of support for one or the other movements color the objective threat of a mob. The mob doesn’t care about your team or feelings of sympathy towards them.

Politicians this year, especially Democratic ones, adopted a new set of rules when it came to political discourse, whether they knew it or not. That new rule set, endorsed by their own words, helped pave the way to Capitol Hill yesterday. It is a reaction they should have seen coming. But I don’t ascribe politicians an appreciable level of self-awareness.

More likely, they would just obfuscate, obfuscate, and a little more obfuscation with various declarations of ‘out of context’ or ‘not what I/we meant’ and so on.

“A riot is the language of the unheard.” – Martin Luther King Jr.

Speaking of out of context quotes. How often was that one plastered upon the Twitter sphere this past year? How about yesterday from actors of a different political bend?

Let’s put it into some greater context (link to full speech).

“Now I wanted to say something about the fact that we have lived over these last two or three summers with agony and we have seen our cities going up in flames. And I would be the first to say that I am still committed to militant, powerful, massive, non­-violence as the most potent weapon in grappling with the problem from a direct action point of view. I’m absolutely convinced that a riot merely intensifies the fears of the white community while relieving the guilt. And I feel that we must always work with an effective, powerful weapon and method that brings about tangible results. But it is not enough for me to stand before you tonight and condemn riots. It would be morally irresponsible for me to do that without, at the same time, condemning the contingent, intolerable conditions that exist in our society. These conditions are the things that cause individuals to feel that they have no other alternative than to engage in violent rebellions to get attention. And I must say tonight that a riot is the language of the unheard. And what is it America has failed to hear? It has failed to hear that the plight of the negro poor has worsened over the last twelve or fifteen years. It has failed to hear that the promises of freedom and justice have not been met. And it has failed to hear that large segments of white society are more concerned about tranquility and the status quo than about justice and humanity.”

All of a sudden riots are a symptom, not a cure.

Look now at the broad brush stroke reactions being plastered across social media.

How many posts have you seen, “If you voted for Trump you are a Bad Person, period.” or some variant? As if one binary choice the politicians offered us four years ago between Trump, and that paragon of virtue, Hillary Clinton, made you good or evil. That one singular choice.

That is the level of thought we have been reduced too, the social media bite, the Twitter post, the bad Meme.

We have two. The one we will likely take… and the one we should take.

We will likely see a Democratic reaction, we already are in fact, from the sympathetic media elements and the prominent party members taking full advantage of the free political capital they were just handed. Polishing their image of “reasonableness” and pressing the fact they hold all branches of government with the exception of the Supreme Court. The SCOTUS will only block the most egregious of advances and the Democrats do not have enough of a majority to press too aggressively anyway. But they have been given a hell of a pile of paving stones to start.

Yes, this could be used to press gun control as part of a broad security bill of some sort. Look for that.

The second path, the one we should take.. but won’t, is the one that the Democrat party would already have been wise to be following, but hasn’t.

The allegations of voter fraud and the instances of it would hold far less sway if the Democrats had been as dogged as the Republicans in rooting it out. If they had shown a willingness to concede races to the rightful winners (still themselves, probably) as long as we knew all the votes had been found and properly counted. If they hadn’t treated the opposition like imbecilic children for thinking there was voter fraud (and there absolutely, provably was) and instead went step in step with their opponents to count the votes, they would be looking like absolute saints right now. The winners would be exuding an attitude of listening to their electorate, even those who didn’t vote for them, right from the moment it looked like they won.

But they didn’t take this path of assurance. The path of listening.

So, what will America fail to hear next… from whom?