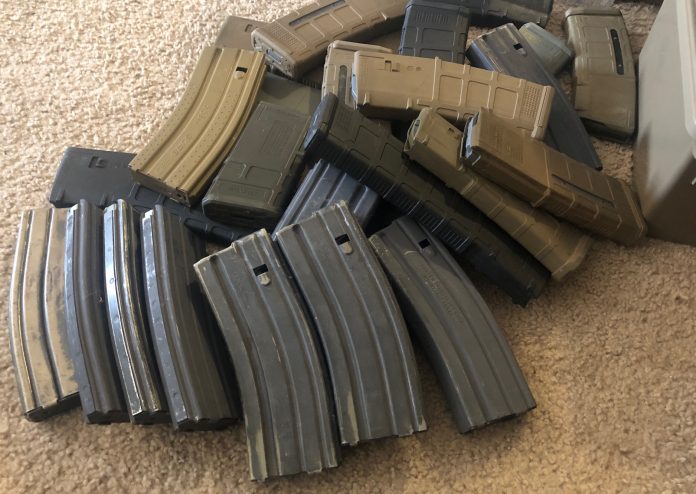 From our friends at MCRGO and the FPC

When the Founders drafted the Constitution, they saw fit to add the Ex Post Facto clause to prevent the Congress from passing retroactive legislation as they found the concept of criminalizing prior conduct after-the-fact to be repugnant. Biden seems to have overlooked this clause, because his gun plan calls for regulation of currently possessed assault weapons under the National Firearms Act.

As the law currently stands, the NFA requires individuals to register machine-guns, silencers, short-barreled rifles, and certain other arms. In addition to passing a background check, individuals with NFA-regulated items are required to pay $200 for a tax stamp. Joe Biden wants this requirement to apply to both [modern sporting rifles] and magazines that are already in the hands of law-abiding gun owners. Consider that the average owner of a semi-automatic rifle has at least two magazines, that means these owners will have to pay at least $600 each for the privilege of owning property they already possess.

Biden’s proposed alternative is disarmament. As an alternative to paying a fortune to keep your guns and magazines, he plans to offer a “buy-back” program allowing you to surrender your right to self-defense in exchange for what is likely a paltry amount of cash.

Individuals have a natural right to possess property, and the government has no right to intervene in that ownership until the owner harms someone else. Historically, registrations are an intermediate step toward seizure and human rights abuses. Likewise, economically compelled disarmament sales are also an act of tyranny.

Imagine going onto PSA’s website right now and seeing a deal they often advertise, a rifle case and 7 magazines for about $90.00.

How can the government taking that $90.00 item pile and making it cost nearly $1500.00 lower the number of incidents of criminal misconduct with a firearm? How will taking a product that isn’t even a firearm and punishing the owners financially, thereby hurting those of lowest income the most, curb firearm criminal misuse? You think if they can’t buy it they won’t take it? When has that worked… ever?

I genuinely want to hear their argument, explained in full, and in all its lukewarm IQ glory. I want to know how they arrived at this conclusion and just what Olympic level mental gymnastics were required to conceive of this plan. Most of all I want to hear it explained, in detail, how this isn’t violating the ever living hell out of the second amendment by leveling the sin tax to end all sin taxes.

You are proposing imposing a roughly 2000% tax on magazines. Many rifles purchased, and many handguns, would jump $400.00 in price, minimum. Because guns bad. God forbid the company was generous and it shipped with 2 magazines and now the tax is $600.00 and the waiting period for the NFA jumps to astronomically unacceptable levels. Thank you for your purchase, you may pick up your firearm and magazines in 2024… maybe.

It’s not like they would throw a 45 day maximum wait time into the rule or follow the Brady transfer rules which would be a minor concession of reasonableness that would, at the least, indicate somewhere in the proposal group someone has a fingertip touching reality.

It blows my mind that the ATF was just shouted down on free SBRs, and now someone feels the proposal of $200.00 on an astronomically larger number of items will somehow be a-ok?

“Well it isn’t about getting this rule passed, Keith. It’s about starting a dialogue so a solution can be worked out that benefits both sides and is a reasonable compromise.”

No, you naïve hypothetical low effort voice of reason, there is no reasonable compromise where both sides get some of what they want here. Gun owners only get to keep some of the things they don’t want to lose any of.

Imagine, if you will, that tomorrow “servitude as manual labor property” got reintroduced as a proposal. The justifications were that it would actually mandate that the upper classes pay to house the lower classes in exchange for only basic labor. The terms were “generous” in their writing, basically that instead of a wage and freedom of personal finance you received a legislatively determined and certified standard of living, absent income.

Would even favorable terms in writing make this proposal anything other than a nightmare? Would it not be about ‘getting a rule passed’ and instead a getting ‘favorable’ compromise by starting a dialogue? What compromise is there to slavery? When someone becomes property, loses their autonomy to act on their own completely to become a tool, what set of circumstances makes this okay? We aren’t talking enlistment, job requirements, or medical diagnosis requiring another person to manage one’s affairs, we are talking making a person back into property under legislated terms and conditions.

There is no compromise with a bad proposal. There is no middle ground. This isn’t proposing building a new office building or school and we have to haggle out the design. This is compromising the human rights of self-autonomy because you say ‘this bad, this good’ and that this asinine idea will somehow… someway… without anything resembling empirical evidence there is a positive benefit at all to say nothing of a benefit worth the cost… will fix murder.

Gonna tax the murder away. It just wasn’t taxed enough, that was it… *sigh*