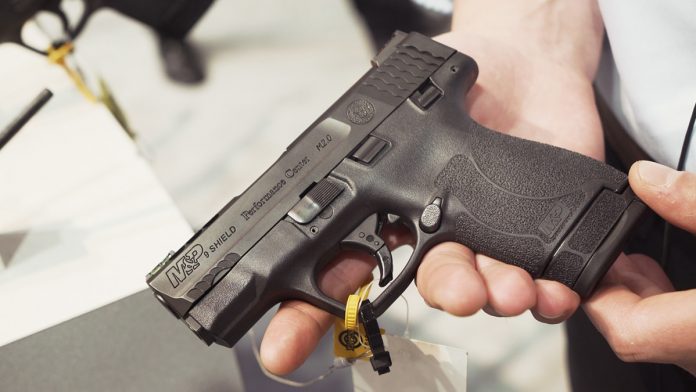 Smith & Wesson is a household name. It is recognizable at levels that companies like Bravo Company and Sons of Liberty can only imagine. Even companies like Springfield Armory, FN, and IWI, major manufacturers that have massive recognition inside the gun community do not hold this kind of recognition. It’s a fame all its own.

The just had a successful product launch yesterday too, by introducing their M&P15-22 in an AR pistol format. The 15-22 is already among the best .22 lr rifles out there for people seeking an AR like rifle. I would argue it is nearly peerless in category for how well made, how well it runs, and how well it actually conforms to the AR-15 for crossover training.

So the new little pistol is really cool and I hope they sell many many thousands, including one for me.

But all is not peachy,

In a federal lawsuit filed in New Jersey on Tuesday, Smith & Wesson claims New Jersey Attorney General Gurbir Grewal has tried everything in his power to stymie gun sales, and that he is now sifting through decades of company advertisements and marketing materials in an extra-legal attempt to restrict the right to bear arms. -Court House News

This is a tactic we have seen before. Springfield, Colt, and Remington (RIP) have all been targeted by attacks on their old advertising material. The most famous case has been Bushmaster (Remington) and the attacks on their marketing of the XM-15, ACR, and rifles in general the wake of Sandy Hook.

The ‘Machismo’ advertising strategy has been a long and drawn out one. The defensive firearms industry lives on the fact that they generate feelings of security and self-reliance. Like every other advertisement in the world.. some land.. some don’t.

Many of theses ads were placed next to ‘T’ supplements and other low-ball ‘you’re not as manly a man as you could man up to being’ and that is a whole trope of the advertising market. It wouldn’t be if it didn’t work.

I remember the ACR launch page having a bangin’ heavy guitar riff on repeat as you clicked the various features and links to see just how metal the ACR was. Turned out far less metal than they thought since I believe they spent more on advertising the thing then they did making certain it ran the way they advertised. It ended up alright in the end, especially as an SBR candidate, but was never the rifle the riff promised us.

The argument is the same drivel that has been spouted before in a new set of shoes. “Violent Video Games cause violent kids!” (which was unfortunately spouted from corners of this industry as a deflection tactic) is now “Ads cause violent outbursts from unstable people!”

By this same logic, all actors and actresses cause their stalkers. All artists, both visual and audio, cause the wild acts of violence that offenders cite were “inspired” by the piece. It is a projectionist liability and culpability that is largely meant to shift blame from an individual, who probably cannot afford to pay damages, to an entity, multi-million dollar company that has money to pay damages. It’s the simple greed of “who pays” and it is largely driven by people other than the victims.

In October, Grewal filed administrative subpoenas seeking evidence of fraudulent advertising from the gun manufacturer. The subpoenas request documentation related to advertisements that claim firearms make a home safer, an untrained homeowner could use a Smith & Wesson firearm safely and effectively to defend his home, and whether guns enhance one’s lifestyle.

Which, as we well know, will translate into pulling studies with cherry picked data that when taken in context proves a whole of only one thing… This question is hard to answer.

Do guns make people safer? Yes, in context of proper use.

Are they dangerous in the house? See previous answer.

Do they make a household safer? See the first answer.

Do they provide a peace of mind to the owner? Do they improve the feeling of security and reduce anxiety? Do they _______?

You can frame the questions to make the answer become your foregone conclusion and that is precisely what AG’s like Grewal are looking to do in order to stick companies like Smith & Wesson with a bill that will drive them out of business. They can claim this isn’t the goal, but the data shows that it is. The most conservative estimate of defensive gun uses per year outstrip homicides by nearly 4 to 1 and deaths including suicides still by 3 to 2 (~60,000 lowest estimated DGU’s compared to ~39,000 total firearm deaths).

If we take the highest range of estimation at 3,000,000 DGU’s the rate of positive uses to negative outcomes is unquestionably positive. That is for one, admittedly crucially important, positive use of firearms in society. If we begin to factor the other hundreds of millions of positive uses from collecting, sport shooting, and hunting the numbers skew further.

It is telling to me that despite being comparably lethal we do not attack alcohol and vehicles in this manner. We don’t decry ads displaying professional drivers doing stunts like we do ads. We just tag it (professional driver) or (drink responsibly) while a firearm get pages in bright colors of their manual dedicated to safe operation and tags on the gun itself telling the new owner and operator to read the manual and use the product safely.

There is no sticker on a new cars steering wheel declaring “Warning! Unsafe handling may result in injury or death!” but there sure is a gun.

Instead, vehicles are looked at as a product to make safer and educate users further on. Don’t give me that “we license drivers!” line either, we know there are multitudes of unlicensed, suspended license, and so forth drivers on the road daily because they have places to be. Licensing is a permission slip to use publicly owned (tax payer) roads, not operate a vehicle.

So back to the topic at hand, Smith & Wesson suing New Jersey.

This witch hunt against advertising, while ignoring every effort S&W makes to have their consumers use their product responsibly, should be decried as the hollow gun ban effort that it is. For after all, there is no need to ban Smith & Wesson if you bankrupt them instead, same effect in the long run.

Or so anti-gunners hope. As we can see from the number of quality AR makers that sprung up after 2004, the market will provide. But nobody should be bullied from the market for a hollow attempt at ‘false-advertisement’ claims.

In 2018, New Jersey Governor Phil Murphy announced that gun manufacturers would be listed in monthly reports showing the source for every “crime gun” recovered by police in the state.

Murphy said months after signing the executive order that he hoped “bringing light to this topic” would spur gun manufacturers to “act responsibly and work with us to stop weapons they make from ending up in the hands of dangerous criminals.”

Do they also so voraciously go after alcohol companies, I wonder? Is every death or injury listed by brand, when they know? Does Jack Daniels or Coors get an email from Jew Jersey stating their product resulted in XX many deaths and YY many injuries last month and that they should do more to make sure alcohol doesn’t make it into the hands of dangerous drivers and abusers?

Criminal misuse of a product or use outside its intended lawful purposes is not the fault of the company who built the product. The only time you can claim otherwise would be by building a case that the product is actually intended for other uses than those described, like the recent case a against a ‘wall hanger’ manufacturer where one of the two components acted as a drop in auto-sear for an AR-15.

Good on S&W, bring them down a notch back to the land of reasonable assertions.