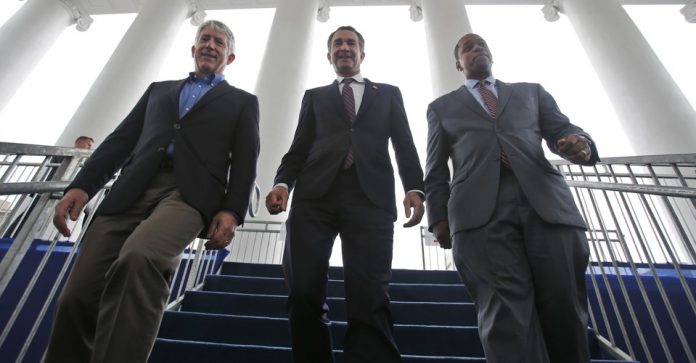 From our friends at DRGO
(theatlantic.com)

[Ed: The Massas one “labor[s] so hard for” in Old Virginny: formerly blackfaced Herring is the anti-freedom politico on the left, similarly scandalized Governor Ralph Northam at center, and accused sexual assaulter Lieutenant Governor Justin Fairfax on the right.]

Last week, Virginia Attorney General Mark Herring caught wind of law-abiding citizens planning to gather to exercise their First and Second Amendment rights and, rather than directing government to facilitate their Constitutional activities, he succumbed to his tyrannical impulse, went to court, and put the kibosh on it, afterward tweeting:

“Putting hundreds or even thousands of Virginians at risk for the sole purpose of selling guns is just not worth it and I’m pleased that the Judge agreed with me.”

“Worth” what, and to whom?  That is the central issue that Herring’s litigation raises.  I’ll concede that the number of people placed at risk, presumably from coronavirus, is correct; and let’s take for granted that the risk is grave—serious illness and death. Does that outweigh an enumerated Constitutional right that codifies the natural right to self-defense and one that guarantees the right to peaceable assembly?  Who decides these things?

I hadn’t planned to go to this show.  Although there is always room for more, I am well-stocked on ammunition and guns. I can always rationalize buying a gun I’m looking at, but I didn’t have the inclination to buy another one right now.  Perhaps I’ve misjudged the tenor of the times and I’m certainly lying about desire, but it was “just not worth it” to me right now.

But unlike our collectivist-minded would be overlords who believe it is essential to impose their will over everyone, understand that for many people the risk of attending this show would have been absolutely worth it.

If I were about to become a new gun owner, frustrated by the lack of local supply on gun store selves, and wanted to interact with more seasoned gun owners, this would have been a great opportunity. If I were a victim of domestic violence and rbecoming armed was a pressing necessity, it would be well worth the risk. If my store in downtown Richmond had been looted, if I were a Republican poll watcher, if I were a recently assaulted MAGA hat-wearer . . . I could go on, but the point is that in a nation that prioritizes liberty, individuals chart their own course not tyrants who highjack a plague and weaponize it with fear mongering to disenfranchise the people they are supposed to represent.

I know there are more than a few Venezuelans and Hong Kongers who would have happily taken whatever the risks would be of attending that gun show to obtain guns to fight for their right to exist against governments that tyrannically oppress them.

A person isn’t fully alive if there isn’t anything or anyone they’d risk dying for. We acknowledge and accept the risks associated with driving to work, bearing children, caring for the sick, liberating the oppressed, and in recent times, speaking our minds publicly because these activities have value and meaning to us as individuals.  Our Republic endures because people pledge their lives to preserve it. To rob us of that is to rob us of our individual humanity, and ultimately of the value of our lives.

Robbing us of our God-given individual rights is exactly what they want to do. Collectivist thinking is the thread that ties the tyrany-afflicted together.  Why did “gun sense” organizations run ads about “protecting Obamacare” in Virginia, instead of running ads about gun control?  It wasn’t just because interest in “gun control” is at such low levels, it’s because Obamacare is another incarnation of collectivism (and because it’s proponents are also anti-gun).  We know this because one of its architects, Zeke Emanuel, who is now on Biden’s transition team, wrote that healthcare should be prioritized for people between the ages of 15 to 40, with people aged outside of that range receiving considerably less care—for the good of society!

Collectivism is at the heart of Josh Horwitz’s argument against guns:  if any and all gun control isn’t passed, individuals will believe that they have an individual right to determine when the government has become tyrannical and take up arms against it.  His straw-man argument:

“The problem is that one person’s tyranny is another’s universal healthcare bill.”

Why are these people so afraid of individual rights?  Because as long as you can exercise your individual rights, they cannot easily make you do what they want, and that appears to drive them bonkers:

“We are a country based on the rule of law. Guns don’t make you a super citizen with the ability to make special rules or have special political influence because you happen to be armed.”

What about the law termed the Second Amendment?  What if a subsequent law is tyrannical?  Horwitz is of the opinion that if a new law is backed by 51% of the vote, the issue is settled.  The fact that I’m armed doesn’t make me “special,” it makes me harder to kill. I have no intention of beginning a fight with anyone, but I want would be oppressors to think twice before oppressing me.  Instead, Horwitz wants me to pledge just to accept whatever the majority decide, even if that’s two wolves overruling a rabbit about tonight’s dinner menu.

Don’t let the drama of the contested Presidential election distract you from local gun laws fomented by miscreant legislators and government officials.  Even if Trump prevails, we must still support appeals of today’s hogwash to superior courts.

All law is local: focus on what you can influence, and relentlessly exercise your right to warn your elected officials when they infringe on your rights.