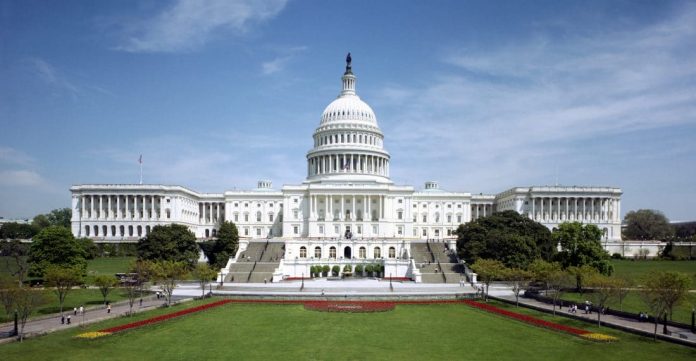 ABC News opens with this headline

It should continue to be allowed.

But that won’t stop news agencies from trying to ho-hum and anti-gun actors from harrumphing about the fact that a member of congress can keep personal arms. Their staff has certain permissions to do so as well, and this should be normal.

There are 535 voting members of Congress, 6 non-voting, 9 Supreme Court Justices, The President, Vice President, and their immediate staff who are all under increased public scrutiny and ire by the very nature of being in the public eye. They are celebrities, after a fashion, but with far lower popularity. The irritate people just by holding the office, sometimes just by having a party affiliation. And it does not take a mob to put their lives in jeopardy, it takes a lone nut in the correct place at the correct time. The ways these people’s lives are at risk are legion, but nobody lives a life free of risk.

They are targets, and no amount of well meaning, well wishing, utopianarian shallow mindedness will alter that fact. They are targets. They are also the people in the best position to act in their own defense should the broader screen of the Capitol Police fail at their jobs, which they have.

That isn’t knock against the Capitol Police, the Secret Service, the FBI, or any agency whose job it is to screen for threats. They have to succeed at a rate of 100% to prevent all possible incidents of assault, terror, or other violent threats to the people under their care. The myriad threats who could bring that violence, and have, only have to get it right or get lucky once.

With that in mind, if we think of the active protective services as the primary screen of particulates. Yes, we will use a water analogy here. If those screens catches most of the problems then it is effective and worthwhile filter. However adding the final screen, the finest version of the filter, by keeping Congress and their staff able to bear personal arms is worthwhile. Almost nothing ever reaches this screen because the rest of the filter is so efficient, but almost nothing is not nothing. Nor is this final filter a catch all, it is simply a last chance to catch one more problematic particulate that made it past the rest of the filter.

The practice is allowed for lawmakers, with some limitations, under decades-old congressional regulations. The public is barred from carrying weapons in the Capitol, its grounds and office buildings.

Republican Lauren Boebert, 33, was elected this month from a conservative western Colorado district after gaining notice as a brash pro-gun activist who straps a Glock pistol to her hip. In an upset last June, she defeated five-term Rep. Scott Tipton for the GOP nomination, in part by claiming he wasn’t an ardent enough backer of President Donald Trump.

Boebert asked Capitol Police officials about carrying her weapon when she and other House freshmen taking office in January were in town recently for orientation programs, according to two congressional officials. Both people — a Democrat and a Republican — spoke on condition of anonymity to describe her request.

Anonymity, because we spur this into an issue it should not be. Nor would it be if folks like this did not keep making it so.

Lawmakers may not bring weapons into the House chamber and other nearby areas, the regulations say, according to a letter Rep. Jared Huffman, D-Calif., wrote in 2018. Aides can carry lawmakers’ weapons for them on the Capitol complex, he wrote.

This seems a little convoluted a practice that requires overhandling.

In his letter to House Sergeant at Arms Paul Irving, Huffman summarized the regulations after being briefed on them by Irving. An opponent of letting members of Congress carry guns on Capitol grounds, Huffman abandoned a 2018 effort to halt the practice due to colleagues’ strong opposition and said in an interview that he wouldn’t try again this year due to continued resistance.

Meaning several million new gun owners newly minted and gun gontrol being effectively a dead issue to the public kept raised only by anti-gunners? We know Biden wants to expand the NFA in an atrociously egregious manner but cooler heads should keep that button unpushed and it can remain a D talking point to appease the mayors and moms who demand things demandingly. A flock of Karens instead of cranes.

Huffman said the loophole for lawmakers, adopted after a summer of racial unrest in American cities, is outdated and risky.

A summer of racial unrest in American cities… were you awake for 2020, sir? Also we have a nasty viral infection floating around that caused the police to limit their responding actions to reduce their risk of infection and left the public that they are screening far more vulnerable during turbulent high stress time where financial pressures increased drastically.

Also.. Loophole? Yay! It’s back! The word! “Loophole, Noun: A written rule or portion of a rule that allows something you don’t like so you will obfuscate that it was deviously or unintentionally left in.”

He said members and their staffs carry firearms around the Capitol “all the time,” though he mentioned no names. He said lawmakers keep guns in their publicly accessible offices, though building entry has been limited due to COVID-19.

It’s such a problem! That it is a regular behavior that doesn’t disrupt the Capitol?

“Members could have a loaded AK47 sitting on their desk and no one would ever do anything about it,” Huffman said.

Why should they? Serious question. I have one on my desk (well.. SCAR 17) so what is the dramatic risk in allowing the duly elected members of the Government to keep arms in their public personal spaces? We give unelected members that privilege, thousands of them.

“But those are cops!”

Dan Crenshaw is a Navy SEAL, many serving members are Veterans or hold other qualifications in arms, and quality concealed carry training and practices are not difficult nor present an abnormal or unacceptable risk. Especially not in comparison to something so inherently problematic as safely operating a motor vehicle.

Certainly it is practical that certain areas remain sterile of exterior armaments from the general public, but Congress are supposed to be there doing their jobs and they are inherently the highest profile individual and group targets.

He also said with lawmakers exempted from passing through screening devices throughout the Capitol campus, “no one checks” to make sure they’re not bringing guns onto the House floor.

Again, why should they? To make you feel better? Do you believe for a moment that if one of your colleagues, a fellow member of the highest legislative offices in a powerful and prosperous first world nation, wanted you harmed they could not easily find a way to do that? That ‘waving through’ your congressional sitting members so that they may go about their business as congressional members and not being certain that they, the duly elected lawful representative, are not carrying a personal firearm is the thing keeping you from harm as another sitting member?

Are you actively this naïve to risk? Or this simply a low risk way to attack the right to carry a firearm for protection by making a rather poor ‘plea to reason’… for surely members of such an “esteemed” body as Congress are well enough protected and should eschew such vile and base things as personal defensive weaponry. Especially because that opens up the possibility that one member or staffer could shoot another! That possibility, of course, exists regardless but it exists with allowed carry too.

I suppose that makes the injured or killed who were unarmed and following the rules no less injured.. but more righteously so?