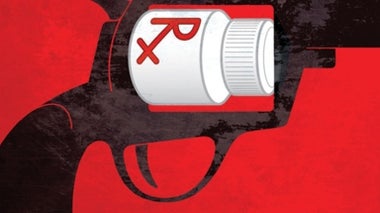 [Ed: Today we begin sharing the talks that members of the DRGO team gave September 20 online for the Second Amendment Foundation’s 35th annual Gun Rights Policy Conference. Dr. Przebinda, our Project Director, kicks it off. See each of our talks on the DRGO YouTube channel or at 2:17:23 here. The entire schedule of talks is here, divided into 4 parts on the SAF channel.]

My name is Arthur Przebinda and I’m the Project Director for Doctors for Responsible Gun Ownership.

I’m pleased to have the opportunity to speak to you in these strange and strained times. We are less than two months from the presidential election and tensions in our country are not easing.

The Biden campaign has indicated on its website that they plan to “…call for Congress to appropriate $50 million to accelerate … research [into the causes and prevention of gun violence] at the CDC and NIH”.

It is clear that a Biden administration would use “public heath” as a line of attack on the Second Amendment.

DRGO’s primary focus is countering this historically demonstrated disingenuous advocacy research masquerading as a pursuit of public health and safety.

Today, Dr. Young will summarize this past year’s anti-gun research. Dr Petrocelli will focus in on the most insidious implementation of “public health” line of attack: red flag laws.

For my part, I want to address a more nebulous tactic used by opponents of the right to keep and bear arms.

For some time now, we’ve heard the argument that “there is no place for “weapons of war” on American streets”.

Its primary intent has nothing to do with putting meat on the table or rape prevention, although personal safety and food procurement are the most frequent benefits of the free exercise of the right to keep and bear.

The Second Amendment is the essence of and the safeguard of liberty.

A truly free country cannot exist unless the populace has the means to keep in check and counter the government’s ambitions. And the ultimate form of that check is a parity of force.

When one comes to that that realization, “gun control” is revealed not as the pursuit of public safety but as a usurpation of the ultimate political power of a free people.

The gun rights community ought not shy away from making this point. It appeals to both ends of the political spectrum.

At every opportunity, then, we should emphasize that the Second Amendment:

Provides as the ability to defend our country

And as such, it is a CIVIL AND POLITICAL right

ANY attempts to curtail or abridge the exercise of that right is not just a civil rights violation, but it is a strike at the fundamental balance of power upon which our country was founded.

I am not eager nor cavalier about using this very potent political power.  Restraint should be the guiding principle. We speak of defensive gun use in the face of aggression as the only morally legitimate use of guns. Similarly, any armed opposition to government tyranny is a last resort – after the vote and the courts fail to restore freedom.

Nobody listening or watching this should misconstrue what I’m saying as a legitimization of or an exhortation to violence of any kind, for any cause.

I AM saying that depriving the people who elected you of their ability to reign in your ambitions is not governing. It’s subjugation.

— Dr. Przebinda is an imaging specialist in Southern California. He advocates for the Second Amendment in his state and nationally and since 2017 serves as DRGO’s Project Director.