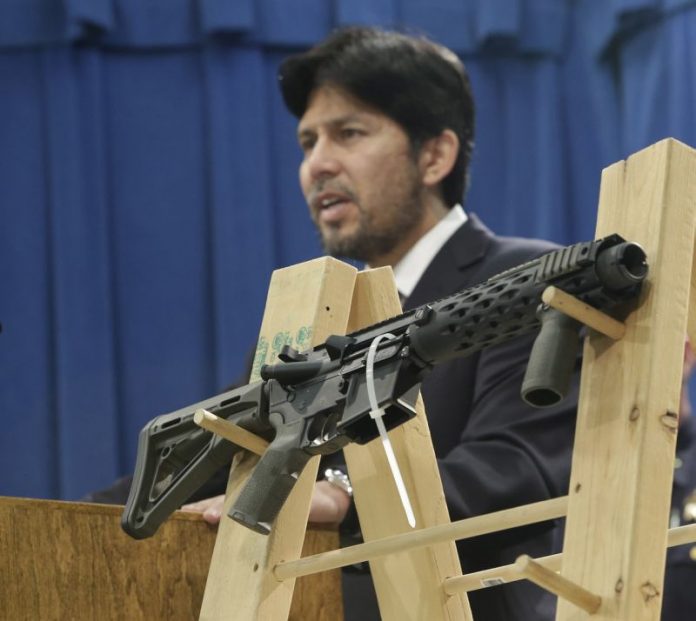 The Democrat-controlled New York State Senate approved S.7763-A/A9903 on a 43-17 vote on July 23rd. The measure ‘aims to create tough new statewide laws on firearms without serial numbers such as those commonly built by hobbyists in the comfort of their homes‘. Further, it would make the act of fitting together the component parts of a firearm a crime for anyone who is not a licensed gunsmith.

No more AR builds, no more 80% builds. No more Glock Kits. Hell, depending on how strict this is, no more cleaning your own firearm. That may constitute ‘fitting together components’ since the Senate is far from filled with geniuses. They gave us the S.A.F.E act after all. [I checked, that is actually specifically exempt in the bill… good for them, I guess. But don’t replace a part on your own! Bad New Yorker! Felony for you! You unlicensed gunsmith!]

State Senators in the Empire State (Empire is right) called it the toughest ban on so-called “Ghost Guns” in the country. Cool story… it certainly hasn’t stopped the criminally inclined people before, but surely it will this time around.

The bill had been floating around for almost a decade in one form or another but was consistently foiled while Republicans held narrow control of the Senate. New York’s state government has one-party rule, with Dems in the driver’s seat today so that impasse is over. ‘Ghost Guns’ will be banned. Long live serial numbers! No one has found a way to do crime with serialized guns yet, right?

“Ghost guns have been a scourge for years, and that is why I first introduced legislation to regulate them back in 2013,” said Assemblymember Linda B. Rosenthal, a Manhattan Democrat.

Just because they make you wet yourself doesn’t make them a ‘scourge’ Linda. A scourge would be a multi-year drought or a state-wide wild fire. A scourge would be a warlord setting themselves up with several blocks of your city cut off, freedom of travel restricted and lives threatened with violence for noncompliance (ask your west coast friends about it). A scourge is a tyrannical dictation of power from the perpetually safe elites, who need not abide by the measures of the masses, to arbitrarily declare what is safe and unsafe based on political gile, not factual analysis.

The new rule defines a “ghost gun” under state law as any firearm that isn’t serialized and registered, with no provision for grandfathering of guns already in circulation. Currently, federal law allows anyone legally able to possess a firearm to build one for their personal use. Serialized and registered. No word on how they plan to sweep the state clean of any offending firearms of a “ghostly” disposition yet. Funny that…

Under S.7763-A, the manufacture or otherwise assembly of a firearm, rifle, or shotgun would be banned by anyone other than a licensed gunsmith. With that, it would also be a crime for anyone except a gunsmith to possess a firearm without a serial number. In the case of “unfinished frames or receivers” in the possession of such a smith, they would have to be serialized and registered with the State Police. Elimination of the DIY industry despite its complete Federal legality.

Illegal possession of a ghost gun, under the proposal, will be a Class D felony. Class D felonies include robbery and certain types of manslaughter and carry a penalty of as many as 5 years in prison… for having a piece of metal or plastic without a number the State has somewhere in a book. Unlawful production of a ghost gun would be a Class C felony, making it a parallel crime to assault and drug distribution, and spending up to 10 years in prison. For building a firearm without the vaulted permission of the State Presidium and registering it with the state and only as a licensed gunsmith may you do so.

Shall not be infringed indeed… Constitutional scholarly skills, or even those of simple language, are a little thin in the atmosphere of the Empire… State. Empire State.

“New York is a nationwide leader on gun safety and we applaud Senators Hoylman and Kaplan for their leadership on this critical public safety issue in the NY Senate and urge the NY Assembly to swiftly pass these life-saving pieces of legislation,” said David Pucino, Staff Attorney at the Giffords Law Center.

A Critical. Public. Safety. Issue… COVID-19 in New York has killed 32,413 of the total 158,000 deaths nationwide attributed to the respiratory malignation and yet making sure a piece of metal or plastic has a number on it is the ‘Critical Public Safety Issue’… Because GUNS BAD!! Or some other lukewarm IQ garbage.