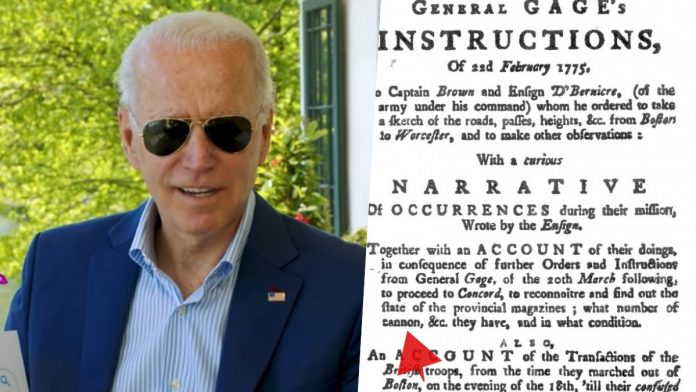 Screenshot of Vice President Joe Biden’s recent interview along with a split-screen of General Gage’s orders of Feb. 1775 instructing his men to be on the lookout for cannons not under the King’s control.

In a recent online interview, Vice President Joe Biden said during the Revolutionary War private citizens couldn’t own cannons. That has been ranked as false, and with good reason.

The interview in question occurred last month with Wired, where the presumptive Democratic Presidental candidate was asked about gun control. In justifying a ban on “assault weapons,” Biden said, “From the very beginning you weren’t allowed to have certain weapons. You weren’t allowed to own a cannon during the Revolutionary War as an individual.”

Poynter Institute’s Politifact fact-checker this week researched the claim and, after consulting with noted Second Amendment scholars such as Professor David Kopel, ranked the statement as being “false” for a variety of reasons.

Here is our take.

Going back to 1638, the founding date of what is today The Ancient and Honorable Artillery Company of Massachusetts– to this day a privately recruited military unit– local communities took it upon themselves to charter units of cannoneers.

By the 1740s, local artillery units were in Rhode Island, New York, and Pennsylvania with the official history of the latter’s Militia and National Guard noting that in 1747, largely through the efforts of Benjamin Franklin, a plan was undertaken by locals colonists to found companies of “horse, foot and artillery” that the volume stresses “was a purely volunteer organization, and was armed and equipped at its own expense, while its officers were selected by its members.”

Fast forward to the French and Indian War and local volunteer colonists fought alongside the British with one Boston-born engineer, Richard Gridley, helping in the capture of French-held Fortress Louisbourg. Gridley would later show up in June 1775 at Bunker Hill, the first set-piece battle of the Revolutionary War– commanding a motley battery of scrounged up artillery, manned by volunteers, against the British. “Bunker Hill” by Felix Darley, showing early Colonial Soldiers digging and pulling artillery before the battle with the British. (Photo: Library of Congress)

But we are getting ahead of ourselves.

The British Are Coming! (For the Cannons)

As things grew tense between the King and his increasingly unhappy subjects, those Americans yearning to be free exercised their inherent right to keep and bear arms by collecting artillery pieces that were not intended to be used in duck hunting. This included gathering up privately-held cannons, captured French war relics that were brought back as trophies, and, um, borrowing guns directly from the Red Coats. The “Hancock” one of four brass cannons that were swiped by Boston Patriots in September 1774 “right from under British guard” several months before the Revolutionary War. The cannon was smuggled out of Boston and stashed in the countryside to the call of a bald eagle. Used at Bunker Hill, it is currently at the Minute Man National Historical Park (Photo: National Park Service)

The British commander in Boston at the time, Lieutenant General Thomas Gage, sent out spies with orders to find where the Patriots were keeping their military stores– most importantly to keep an eye peeled for artillery. They dutifully reported that, at the small town of Concord, they were “informed that they had fourteen pieces of cannon (ten iron and four brass) and two cohorns [light mortars]… their iron cannon they kept in a house in town, their brass they had concealed in some place behind the town, in a wood.”

The Massachusetts Committee of Safety, a Patriot organization of which John Hancock was a member before he placed his famous signature on the Declaration of Independence, came together on the eve of the Britsh move against the stash at Concord and issued orders to shuffle around the assorted cannon and mortars under their control in something of a shell game to stay one step ahead of the King’s men.

Nonetheless, when the British famously marched on Concord on April 19, 1775– pausing along the way at Lexington for a meeting with the Minutemen and a “Shot Heard Round the World”– the Lobsterbacks knocked the trunnions off several iron cannons too large to carry away and cut down the “liberty pole.”

While the newly formed Continental Army soon was able to lay hands on better artillery— such as 58 British pieces seized by Ethan Allen’s Green Mountain Boys at Fort Ticonderoga and moved to Massachusetts by a Boston bookseller by the name of Henry Knox, as well as two dozen guns swiped by a column that included a 20-year-old college dropout named Alexander Hamilton– it should be noted that the Founding Fathers never mentioned that ownership and circulation of artillery be curtailed following the war.

In fact, Hamilton, who went on to become an artillery officer of some renown during the war, wrote in Federalist 29  in 1788 that, “Little more can reasonably be aimed at, with respect to the people at large, than to have them properly armed and equipped…”

Although the Militia Act of 1792, which largely governed state militias until the National Guard was established in 1903, outlined the common militia and how it could be called out, military historians can point to hundreds of locally raised private units that existed at the time with a myriad of uniforms, arms and, yes, even artillery, of their choosing and ownership. Private militia artillery unit, 1860. Besides the bespoke tophats, they have a Napoleon field gun– top of the line for the time and comparable to a modern 105mm howitzer today. (Photo: Library of Congress)

During that same period, anyone with the desire and extra cash could acquire their own cannon. Indeed, as pointed out by Politifact, personally-owned ship’s cannons were used on American privateers in the War of 1812, with more than 500 letters of marque issued by President James Madison’s administration authorizing such legal piracy. Should we mention here that Madison was a Framer of the Second Amendment?

Even after privateering went out of fashion and the Dick Act largely put a downer in the appeal of large private militia units in 1903, the private purchase of artillery was by no means illegal or even regulated, in the country. This 1927 section from the Bannerman’s Army-Navy Goods catalog had 18 Great War-era intact 78.5mm German field guns with 4,400 shells and associated fuzes for sale, ready to ship, saying “no red tape will delay our delivery.” Something the Patriots of the old Massachusetts Committee of Safety would have surely toasted. (Photo: Chris Eger)

Even in 1934, when Congress responded to media-hyped Prohibition and Depression-era outlaws such as the Dillenger gang by regulating machine guns, suppressors, short-barreled rifles, and short-barreled shotguns under the National Firearms Act, they kept artillery pieces fully legal and free to own without Uncle Sam getting involved. Ironically this meant that for three decades you could buy a functional military surplus field gun, cash-and-carry, but had to pay a $200 tax and undergo a background check process to get a .22LR suppressor.

That “loophole” was eventually closed.

It was in 1968, that the Omnibus Crime Control and Safe Streets Act, introduced as H.R. 5037 by U.S. Rep. Emanuel Celler (D-NY) and signed by President Lyndon B. Johnson (D), regulated most “destructive devices” with a bore over .50-caliber. This meant that modern artillery “such as bazookas, mortars, antitank guns, and so forth” were placed under ATF restrictions in a kind of retroactive addition to the NFA. Before that time, you could buy surplus hardware such as working Boys and Lahti anti-tank rifles at local outlets, cheap.

With all that being said, modern breechloading artillery is still available in the “Land of the Free and Home of the Brave,” provided it is registered with the federal government and properly taxed. Still, legacy artillery systems like muzzleloading black powder field guns, such as Hamilton and Madison would be familiar with, do not require tax stamps.

And since you came this far, here you go. I guess Mr. Biden never saw this.