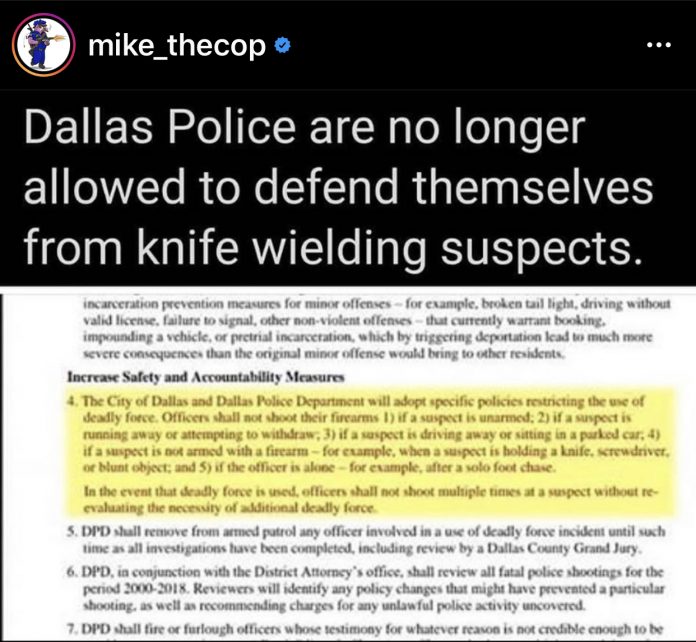 It is the only statement I can come up with to summarize the reform demands being placed upon law enforcement agencies by protesters and politicians. Those asking for reform want it on the books that an officer must be severely injured or killed prior to force being used in response.

This conclusion doesn’t begin to touch asinine ideas like arrest quotas based on national demographics of population, not local, or deploying social workers to emergencies (unsupported by the force and backing of the state). This conclusion is the summation of all the Use of Force specific requests and demands only.

Someone is trying to beat your brains out with a tire iron? Tough luck. You weigh 100lbs soaking wet and the person or persons attacking you are all larger and stronger than you? That’s rough, buddy. You’re 70 years old, physically frail, or disabled, and the person attacking is in in their late teens to late 30’s physical prime? Sorry, better luck next time. They have a knife? Well I guess you better have a knife too and take them on Highlander style because you cannot use a gun…

I’ve seen the following vague graphic attached to the vague promise that ‘Police Violence’ will decrease XX% (72% in this example) if we only do the following 8 vague things. Getting a vague hint of what I’m vaguely trying to convey here? This is just a collection of favorite buzzwords that everyone can rah, rah, rah #DefundthePolice around and pretend like they’re actually helping people like Breonna Taylor, George Floyd, and Ahmaud Arbery from being killed.

These people aren’t having policy discussions. They aren’t tracing the consequences of policy changes, the benefits and problems that will arise, the changes that will need to be made at an officer level, brainstorming foreseeable shifts in community and criminal behavior, trying to come up with contingencies for unforeseen shifts, and writing an objective new policy that officers can use to back their actions or be held accountable too.

No, these folks are just yelling and posting about vaguely vague vagueness that all amounts to, “Wouldn’t it be nice if everyone just got along.” and with no substantive deeper thought. When the people who do have the experience to implement change, who do have the expertise to vet and brainstorm better LE policy, and who do want to gain positive traction in the community come forward with ideas… they are mocked if it doesn’t sound good enough like the vague utopian position that the ametuer said would be nice.

It’s like listening to someone with zero knowledge of construction contracting for commercial or residential structures tell a licensed contractor how they should do the plumbing, electrical, all design, etc. All while saying things that violate building and safety codes, compromise the structure of the house, or are materially impossible, and their justification for why they want these things and they know they are right and the contractor is wrong is that… they saw it on Etsy.

But this is getting rant(ish) in tone and I don’t want it to be.

I want it stated honestly and openly that the policy changes being requested amount to making it a job requirement that officers are injured or killed in the line of duty before responding with force. They will no longer be able to respond to the reasonable threat of force, only force used against them and even then only under certain very unfavorable to their health and well-being conditions.

In short, this is a untenable job requirement. Anyone who would work under it is a fool. And anyone who would seriously propose it does not have the well-being and safety of their employees in mind.

Police reform has been a long time coming, abuses, misuses, and mistakes have a long line of documented cases and a longer line of ones that probably never made it into a report. Accountability and transparency need to happen but it has to be in a system the employed officers can navigate fairly. If not, why would anyone want to be an officer? Why would a job so thoroughly stacked against you appeal in the slightest?