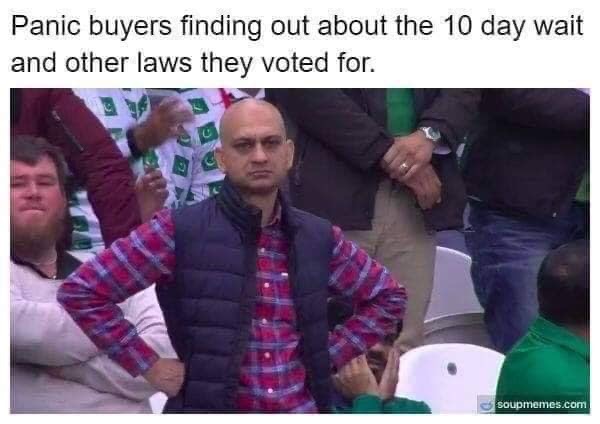 So we know we are stepping to a house of reason, regard, and well rounded consideration. They clearly don’t view the American gun owners as a naive neo-barbarian culture overcompensating for the size of an unspecified organ. That we are terrified of the scary noises at night and that if only we were more enlightened we wouldn’t be clinging to our flashyboomboom sticks.

And that is why it is terrible that the Supreme Court is in a position to extend 2A protections.

The case in question is out of New York. It was the city prohibition on transporting lawfully owned handguns. A prohibition that they have since amended when they realized they were going to lose the case in a dumpster fire of a defeat that we haven’t seen since the handgun prohibition in D.C. met its well deserved demise.

Funny how depending on which room of the Ivory Tower folks sit the perspective can change so flexibly to meet the “Gunz R Bad M’Kay” line in some manner.

AlterNet is taking the tactful approach of pointing out that these are new owners, and that as new owners their poor scared wittle brains are so consumed with fear that the only possible outcome is a mass increase in domestic violence homicides via shiny new firearms. Other articles have pointed to this DV direction, not the AlterNet one specifically. The AlterNet one mostly just yells at SCOTUS for being right leaning and not agreeing with the collective militia theory that Justice Stevens ascribed to. To say nothing of the fact that these new owners had to be domestic violence free in order to purchase their firearm in the first place because even a misdemeanor conviction of any scale makes them prohibited.

Then we look at where new owners must come from.

Now, it’s an RS article that I found and read via a DailyWire article. But the tone fits with what I have been seeing and hearing from around the nation.

The gun owner demographic has expanded left, because arguments that had been seen as just right-wing, uneducated, unwashed masses, propagandist talking points suddenly came into incredibly sharp focus. Personally, I believe there a several factors at play here and each individual who came into new gun ownership during this period had one of them finally make the pull the trigger (pun intended) moment on purchasing a new gun a reality.

When your local PD says we aren’t coming to X, Y, or Z call, that gets wheels turning. Not that anyone already aware of the limitations of police response were particularly surprised or dismayed, but those unaware certainly were. The “Police”, in their sheltered and strangely compartmentalized minds, are this omnipresent good guy/girl. At least when they aren’t oppressing minorities. And that omnipresent “Police” will always be there to help and they will always help and solve everything.

Academically these people may have acknowledged the limitations but it only became real to them and clicked into place when cops across the nation publicly said, “Look, we aren’t coming unless its serious. Here’s the list of ‘serious’ stuff.”

Now most of my PD friends are essentially still going to every call fairly normally, with a substantial shift in tattle tale calls for “non-essential” violations, but it was the public posting of response policy that finally clicked that mental puzzle piece into place that the cops are not there to save you. They are there to protect and serve the community by enforcing the law. That does nothing whatsoever to obligate they stand ready to protect you.

In the absolute insanity that has been the continuous online ongoing response to COVID-19, from the “It’s all a hoax! Damn lizard-folks!” to the, “essential oils will absolutely cleanse the toxins that propagate the virus.” and everything around and in between, many a non-gun owner took a look at their one “level-headed” gun owner friend (because they all know one that’s alright and not crazy like the rest of them) and saw that they weren’t really freaking like everyone else seemed to be…

Oh, they were concerned but there concern was manifesting into a few sensible actions. Like a check on their foodstock, water, generator fuel, and… medical supplies? Maybe even masks!? These they already had because they think in terms of, “just in case” and always had. Suddenly that nice but odd co-worker or friend who had that weird shooting and training hobby was the calmest point in the storm and making what looked a hell of a lot like rational reasonable choices.

And so, they asked those folks about picking up a gun. If they should buy a generator or not, if they knew any decent long term foodstuff supply type items just in case stores around got tight, inquires were made. Thankfully, they haven’t gotten tight, not really and not for long so long as hoarders (another fun group in a crisis) weren’t allowed to overindulge their need for every roll of TP within 5 square miles. But supply chains did take a hard hit and normal deliveries slowed down.

Now, some states are under a “non-essential” sales ban that prevent companies from selling certain products from their floors. Things have gotten weird and leaders, in an attempt to keep flattening the curve and all that, are producing confusing and counterproductive guidance that doesn’t make a whole lot of sense. Cherry picked products and activities are listed as OK or NOT OK instead of solid guidelines of social distance maintenance while shopping and/or out and about and encouragement to use online and pick-up shopping options.

This group sees this too, they see the wildly variant flailing of government entities they considered in a similar light to the police. They don’t look so collected and reasoned as one would hope, not like their level-headed gun friend.

When the nation’s social climate turned towards fear there were a few voices who were very accurately, and without malice, predicting the probable courses of action given certain criteria. A lot of those voices recommended people take steps to defend themselves, they pointed to past riots and national disasters where the reality was things got bad. They pointed out that, very seriously, as the region got even slightly away from ‘business as usual/everything working fine’ the situation devolved and self-sufficiency became the name of the game. #RoofTopKoreans

Awareness shifted, and it wasn’t “Fearful and insecure” Americans… it was all Americans. It was the world. Some gated community dweller might still have blinders on to the very real fear and true insecurity that these things bring, but many didn’t. Those willfully ignorant individuals were the blinded minority who somehow believe when things change and people are scared that just means those people are insecure and should be looked down upon. Not a one of them spoke up and said, well actually this is a fairly predictable human response to crisis and we should continue to encourage good information flow.

Nope… panic and political points. A chance to call gun owners a terrified group of wimps. No regard for genuine concern or fear, no attempt to allay it with reason. Just call them dumb and they’ll shape up, right?

This isn’t really a, The Emperor has No Clothes, type moment. But it is kind of a, the emperor is usually wearing sweatpants watching tik tok videos, moment within segments of the population’s information spheres. That these places, who were regarded as knowledge hubs, are far more limited in their scope. Things were put under real strain and the thin veils of credibility fell off and folks realized, “you really don’t know what its like out here, do you?” That the casual dismissals showed minds caught in loops that cannot rationalize real world conditions over political and social ‘got ya’ points, because that’s all they are used to operating with when times are good.

Maybe this is just a stream of consciousness post. But I cannot, for the life of me, see how dismissing the very real concern of the nation as a whole (with much of it being media driven to feed view counts, still highly valuable) as the irrational response of a few scared insecure Americans when the sales run came from new buyers, makes any sense.

Where did we keep all these brand new scared paranoiacs hidden? This wasn’t a ban scare. It wasn’t the owners who have a few picking up a few more. Nobody in my circles went out of there way to buy more. They already have a rifle and handgun and ammo (because many were looking at training and competition seasons opening up) and some bought a little extra of something they were low on. Some rounded out projects that had been sitting around unfinished. But they didn’t rush stores.

Most of what I saw from the already owning crowd were systems checks. Zeroes confirmed, magazines and ammo accounted for, batteries changed. Not purchasing more. Not putting new systems together that are not zeroed, unpracticed with, unaccustomed to, and could be more of a liability than an asset.

Which again brings us back to ‘these are new owners’, and where did this new group come from? It was a shift in understanding, a shift in the social consciousness that made people recognize the realities of possible threats as they were realizing the realities of how fragile first world society actually is.