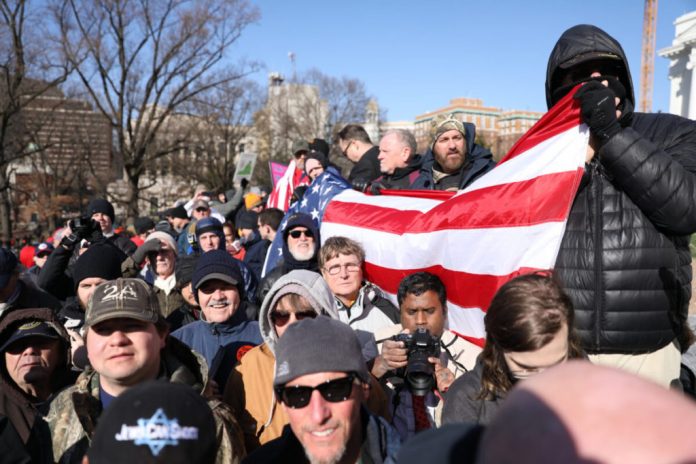 HB 916, the Virginia House of Delegates’ version of Governor Northam’s scary gun ban bill, was heard by the Public Safety Committee Friday February 7.  This bill would ban the sale of “assault weapons”, including AR-15 and AK-47 platform rifles, and makes the possession of suppressors and magazines greater than 12 rounds a felony.  (Why 12?)

Despite the bill’s wide-ranging ramifications, commentary was limited to six minutes per side. Only industry representatives and lobbyists were able to speak, forcing the vast majority of the audience to remain silent.

After the bill passed 12 to 9, several audience members yelled out. Although no threats were made, the Committee Chairman motioned to the Capitol Police, who assembled in front of the audience and told all of us that we had to leave the room or be arrested for trespass.

Trespassing in the peoples’ forum? The cowardice and ineptitude of these delegates were beyond the pale. So I wrote to tell them we will not back down:

I attended last Friday’s House Public Safety Committee hearing on HB 961, Governor Northam’s scary gun, magazine, and accessories ban, and I was disgusted by your management of the hearing in your capacities as Chair and Vice Chair.

In the audience with me were people who had travelled several hours to attend the hearing.  One gentleman was a business owner from a rural county who knew all too well that reliance on law enforcement to protect him in time is impossible. Another was a retired officer of the Inspector General who told me that law enforcement recognizes the best deterrence to crime isn’t law enforcement, but an armed population. As a forensic psychiatrist, I know that psychiatrists are the medical specialists most likely to become homicide victims. We each have unique reasons to be armed, and because of that, will exert our time, talents, and treasure to preserve our rights.

Even with its current amendments, HB 916 will turn us three into felons overnight for possession of standard-capacity magazines and already heavily federally regulated suppressors purchased lawfully for lawful purposes. It shouldn’t surprise either of you that your proposing this bill is morally repugnant to us, especially when your party voted down both Project Ceasefire and bills calling for increased penalties for criminals who commit rape at gunpoint. Your party is giving criminals a free pass, is insulting victims, and is targeting all of us.

Adding to our outrage were the incredible lies told during that hearing. One needn’t be a lawyer to understand that the Heller decision protects our right to keep “weapons in common use.”  The items this bill bans are all in common use.

Vice Chairman Bourne, as a former member of the Attorney General’s staff, why were you unable to correct Delegate Levine when he said that the Supreme Court of the United States upheld these bans? What stopped you from pointing out that only federal Circuit Courts have ignored Heller, and that the Supreme Court has not yet ruled on these bans that it already outlawed? You allowed Delegate Levine to continue demonstrating ignorance and buffoonery when he pantomimed his laughably mistaken ideas about what constitutes an “assault weapon”.

Furthermore, Vice Chairman, when you said that these weapons and magazines were made for the military and should only be present on battlefields, were you aware that the Capitol Police present at the hearing carry Sig Sauer P320 pistols with 16 round magazines?  Are the Capitol Police there to wage war? Are they planning to turn the Capitol grounds into a battlefield?  Now that your party has made the Pocahontas Building a gun free zone, even for those of us with concealed handgun permits, why do they continue to need “military-grade” firepower to keep the peace?  If these magazines are so intrinsically dangerous why should Capitol Police have them at all?

Chairman Hope, given the historic significance of this bill, it is shocking that it wasn’t first heard in a sub-committee, and it is completely unacceptable that only six minutes were allotted for public input. It was perfectly obvious that dissenters outnumbered supporters many times over. The just and decent thing to do, prior to turning those dissenters into felons, would be to let them speak.

We came to change hearts and minds, but most of the committee members apparently arrived with orders from the Governor, who in turn appears to be taking orders from an out-of-state billionaire. We came to participate in government as our Founders intended.  You presided over a deliberate affront to the four hundred years of the history of our Assembly.  As our representatives, you should have been willing to listen as long as necessary to ensure that every voice was heard.

How great is the urgency to eliminate our rights that you couldn’t be bothered to listen to us? Had the two of you allowed those in attendance to speak, there would have been no “disruption” at the end. By refusing to hear them formally, you essentially baited them into speaking out when they could.

This monstrous bill is in for the fight of its life. You rushed HB 961 through to get this to the Senate before next week’s crossover. It is unlikely to pass the full Senate as is, so it will have to survive the wrangling of a conference committee. At each juncture, the few sane liberals in your party will have the opportunity to listen to their constituents and kill this bill.

Even though you wouldn’t let us speak in committee, we won’t stop exercising our rights.  Background checks for gun purchases doubled in the Commonwealth last month, and ammunition sales even in deep-blue Arlington are up 339% compared to one year ago.  Do you think Virginians are only filling ten round magazines?

This bill, and its progenitor SB 16, gave birth to the Second Amendment Sanctuary movement in Virginia. These bills mobilized thousands of citizens who could not stand politics to become involved because, to their amazement, rather than focusing on criminals, you chose to focus on them and their rights.

I can assure you and every member of the Assembly that we will not back down and that we have the support of gun owners throughout the United States. The Second Amendment, our Commonwealth’s Constitution, the positive facts of civilian gun usage, and the Heller decision are all on our side, not yours.

When Secretary Moran greeted Philip Van Cleave (President of Virginia Citizens Defense League) and I at the NRA’s January 13th lobby day, he said he’d see us on the floor of the Assembly.  I replied that we’d see him in court.

The highest court in the nation appears ready to restore the rights that have been wrongfully infringed upon by those of you who target the law-abiding and give aid to criminals. There is no shortage of your constituents who would happily become plaintiffs in [N.] v Commonwealth of Virginia to set this right.