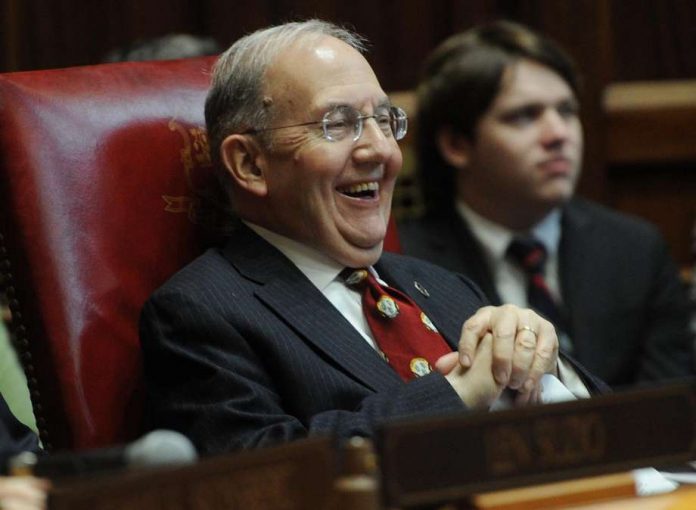 Connecticut Democrats in the state’s Senate have proposed creating a new state police department that would be tasked with specifically combating “far-right” extremism.

The proposal, which was unveiled Wednesday as part of the state Senate Democrats’ “A Just Connecticut” agenda, would publicly fund a new state police department that specializes in investigating “far-right extremist groups and individuals,” according to a news release.

Senate President Pro Tem Martin Looney said the proposal is aimed at combating “potential” hate crimes but stressed that his caucus has no intention of persecuting people for their political beliefs, the Hartford Courant reported. – Washington Times

I’m sure this has no potential for abuse…

“Unfortunately, people who entertain hateful beliefs … are protected as long as [those beliefs] don’t result in hate-crime actions. That’s what we’re talking about,” Mr. Looney told reporters Wednesday. “We want to be more aggressive in enforcing our laws and identifying likely sources of potential domestic terrorism acts against religious institutions and ethnic institutions.”

Remember folks, the NRA, GOA, FPC, VCDL, and on… and on… and on… are considered ‘terrorist’ organizations by men and women who love donations from Michael Bloomberg. The same one who’s promised $60 million in donations to keep pushing the success they’ve seen in Virginia. $2.5 million helped handily deliver Virginia to the anti-2A folks pushing the agenda at present so a warchest of another $60,000,000… be ready for a big push. He’s running for president after all.

But back to CT, the terrifyingly open admission that they want a “wrong think” police branch is astounding. Now comes all the terrible weight of subjectivity. Who determines what is a “hateful” belief and what is a political opinion? Why is it only right-wing extremism and not all extremism?

I’m not particularly concerned whether or not the bomber was screaming, “Hail Hitler!”, “Allahu Akbar!”, or “Save the whales!” when they’re planting explosives in a sports stadium or attacking a gathering for political and ideological gains. Terrorism is not monoplied by a single ideological wing.

Our insistence on shoving everything into a binary oversimplification of motives continues to erode necessary civil discourse on subjects we disagree upon. This proposal should terrify the public. It stinks of all the hallmarks of thought policing and pre-crime in the name of ‘public safety’ and ‘the greater good’.

‘The Greater Good’ is just whatever agenda whoever happens to be at the helm wants it be. Unless that agenda is securing the individual liberties of the citizenry it should remain highly suspect and under our most critical eye.

I am all for better training, tools, and techniques for Connecticut and all LEOs to do their jobs. But their jobs are the investigation of crimes (damages against a person or persons), the pursuit of criminals, and to be emergency responders. Theft of property, assault of persons, and to support and defend a community in a crisis natural, accidental, or violent, those are the jurisdictions of our cops. They don’t need ‘wrong think’ chaser added to that already prodigious list and to be exercised as political tools.

It is lunacy… but then again it’s Looney so…