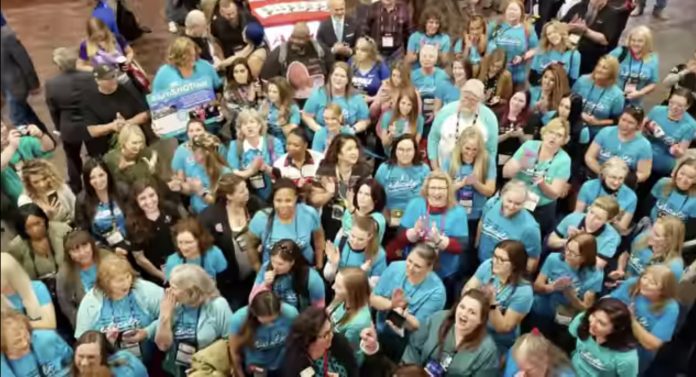 The chants of “Education! NOT! Legislation!” rang through the show floor on Thursday of SHOT week as dozens of teal-shirted women rallied in support of the Second Amendment and the DC Project.

Founded by Pro shooter and retired police officer Dianna Muller in 2015, the DC Project is a nonpartisan grassroots movement aimed at engaging and educating legislators in Washington DC about Second Amendment rights and Second Amendment supporters.

The DC Project aims to present the female face and everyday citizen face of the American firearms owner. The refrain these women hear again and again is “You don’t LOOK like gun people”. The DC Project wants each woman’s lawmakers to know that firearms ownership has no “profile”. Members come from all walks of life and all political persuasions, but they are united in their support for the Second Amendment.

Now in its fifth year, the DC Project will be expanding its efforts this year to include participation on the state legislative level. Events in Virginia have illustrated just how critical engagement is at the state and local level and the DC Project wants to encourage participation and engagement at all levels of government – wherever Second Amendment rights may be threatened. Pro-active engagement can also help reinforce and expand existing rights and keep them from being eroded in the first place.

At their press conference on Tuesday of SHOT Week, founder Dianna Muller, Pennsylvania delegate Kelly Ann Pidgeon, and Ohio delegate Amanda Suffecool discussed the goals of the organization and ways to donate/provide financial assistance. With organizations like the “Demanding Mommies” getting deep-pocket support from the Bloomberg machine, these women are up against formidable financial resources when trying to counter the anti-gun message.

The SHOT Week rally at the Fiocchi Booth Thursday was the DC Project’s effort to #turnSHOTteal and counter the images of red-shirted Moms Demand groups. Thursday’s group photo showing a swarm of women gun enthusiasts in teal-colored shirts was a powerful statement about the strength and numbers of Second Amendment supporters – especially among women. The mantra of “Education NOT Legislation” is sure to continue ringing in the ears of SHOT-goers, but the momentum needs to be carried through the rest of the year.

There are several ways you can support the DC Project:

-Become a member or delegate

-Make a direct financial donation – it costs about $1000 to send a delegate to DC to meet with her legislators during the annual event. Sponsoring a delegate is a direct and much appreciated method of support.

The DC project Foundation is a 501(c)4 organization and contributions are not tax deductible, but they HAVE now partnered with REALIZEfac, a 501(c)3 Nonprofit group. Contact the DC Project for details on how you can offer your support, or simply donate online.

Let’s help ensure that every Moms Demand red shirt will be met with a DC Project teal shirt – Every.Durn.Time.