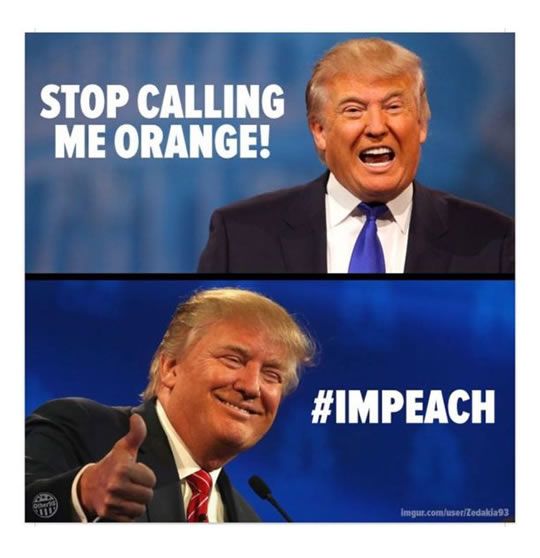 I’ve steered clear of this political topic up until this point. Mostly because… the impeachment of Donald Trump doesn’t directly have a lot to do with firearms and 2nd Amendment rights. The Donald is mostly a fair weather friend of the 2A for political reasons and we saw that when it came to bumpstocks.

So what does the impeachment mean in a more 20,000 ft altitude view of things and how does that relate to gun rights?

Let’s break it down.

The sitting President has been impeached by a less than 100% party line vote in the House of Representatives over two articles with less than clear ties to actual crimes on under US law. Compare that to the two acquitted formal charges against President Clinton for Perjury and Obstruction of Justice, both with clear statutes under law, and the Trump case looks far murkier.

So from a practical procedural standpoint we’re likely to end up with the same result as the Clinton impeachment but with an even more partisan taste left in everyone’s mouths. The Senate was split 50/50 on Clinton, and that only on one charge with the other charge being 55/45 for acquittal.

The Senate this time is likely to give a war stronger showing for acquittal if the party lines hold steady. The absolute most the Democrats are likely to pull off is 47 out of 67 necessary votes, and given the uncertainty and defections in the House they’re not likely to to even get that. It’s possible, depending on the electoral circumstances and how the trial goes, that the conviction vote doesn’t even hit 40 for either charge.

And with the House holding the articles from the Senate until a ‘favorable situation’ can be worked out after the holiday break, the process looks more and more like the political stunt and less and less like the solemn constitutional duty the Democrats claim to have been carrying out in defense of the nation at its principles.

Talk about a house divided. Literally the House divided. Even the Dems were divided and mostly had to be pushed into position like taking an all cats holiday picture. Still a few decided, nope not gonna ride this one down.

What’s this stunt going to get them?

I have no idea what they see gaining out of this that will not be taken away in an election year campaign that will capitalize on every weakness in the Democrat’s case.

The obviously partisan nature of the proceedings overshadows any validity they ever had because the Democrats have been after impeachment vocally from the opening months of the Trump presidency. There is no way this couldn’t look like a partisan attack and yet they brought the weak case to its partisan fruition and have spent enormous political capital to do so.

And add to that the atrociously biased optics of withholding the articles from the Senate… if this was so important the message you would want to send is The Avatar of the House banging down the chamber door of the Senate because this thing is so urgent and so egregious that the Senate must act swiftly! Instead they are sitting on it and playing a game of ‘We aren’t partisan! They are!’

No appreciable gain for any candidate they are running for President and putting all their up for reelection House members on dangerous ground unless they have very hardcore bases. Copy and paste that for Senators that go along with the House. They’re putting all their chips on ‘Orange Man Bad’ and their evidence is ‘well, we said so.’

They also get… energized opposition base with a full drum magazine of political ammunition that will play like sweet resonating justice.

Even with the the blindfolded dartboard approach that finally stuck a point, after three years and multiple attempts, it is far from a bullseye and all but that small hardcore base are kinda tired of it.

All this sets up the potential for huge Republican gains in Congress along with the first reelected impeached President of the United States, potentially with greater gains than his run against Hillary Clinton. Especially likely if no one comes out of the Democrat field looking like a voice of reason and unity, a move that would alienate and dishearten their dwindling vocal base because ‘how dare you ever agree with a Republican.’

What does it mean for the 2A?

Like I said above, status quo more than likely. The 2nd has been making steady gains in small arenas and taking losses in locations where it wasn’t all that surprising, if disappointing. Virginia is the hot zone right now and we’re going to take a more critical momentum gauge from the efforts there than broader national stage where gun rights get swallowed up as a minor issue unless they are contentiously in the spotlight due to recent events.

But if we get the House back and gains in the Senate, a likely event unless Republicans royally screw the PR pooch, we could see and pressure for momentum on items like the Home Defense and Competitive Shooting Act, which would make us happy and a lot of ATF agent’s jobs much much easier.

So the impeachment is an arena where we have to see what settles and what we have to work with after it all settles. The Republican electorate could get down with having a field day welcoming all the Moderates and disillusioned Democrats to the more sane looking party at the moment.

But we will see, there’s a lot of election season to go… oh boy…