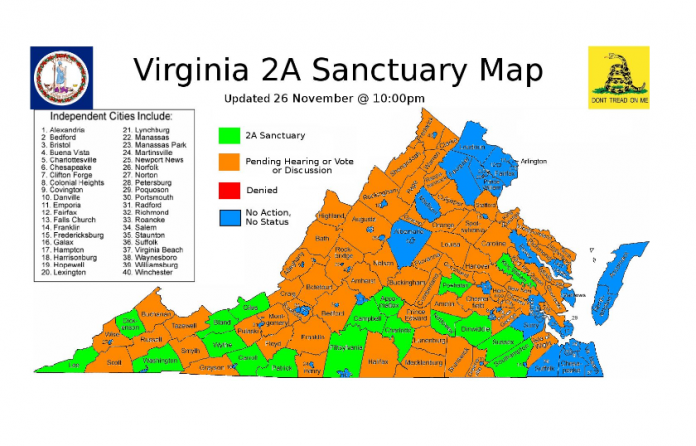 Virginia, since it’s democratic electoral swing, has been in a bit of a crisis around the 2nd Amendment. Virginia has gone full bore on 2A restrictions including a de facto ban on firearm training. However, as has become common in place like Oregon which also swung anti-2A, Viriginian counties have held their own votes and many have elected to ignore Richmond.

Bilge Batsukh over at The Cavalier Daily believes that isn’t a good idea.

Batsukh has a point worth considering. Virginia is… well here’s the explanation.

The reality is that those local measures are entirely symbolic. Virginia is a Dillon’s Rule state, meaning the authorities of local governments are derived from the legislature such that counties cannot legally obstruct the will of Richmond on most issues. With a Democratic grip on statewide executive offices and both houses of the legislature, counties face the option of following the law or having their authority rescinded by the state.

Though the constitution of Virginia provides for the creation of local governments, it does not allow said governments to act as truly independent organizations. If counties were empowered to create “sanctuaries” for certain actions or properties, they would be able to completely circumvent state laws regarding educational curricula, regulation of commercial activity and all other facets of government that impact our everyday lives.

True, Batsukh, true. But what if they all do it anyway. Or at least a significant number of counties like… oh say… all the green ones plus a few more that could pass the option.

What I’m saying is there is a critical mass of counties within the State of Virginia that, if they go sanctuary, it doesn’t really matter what the rule in Richmond is. The State will not have enough mechanisms in place to enforce their rules, it is the open expression of ‘governance at the consent of the governed’, and the whole of Virginia does not consent.

At best, gun control laws will be enforced by state troopers instead of by sheriffs’ offices, usurping the traditional role of law enforcement in many jurisdictions. Refusal to serve the interests of the legislature is futile, and can only end in either extreme divisiveness or the end of elected, local control of law enforcement duties. The existence of the sheriff’s office bridges the creation of laws by the state and their enforcement by local authorities. Law enforcement ought to be carried out by those close to the community, but the state does have the supreme right to intervene and see its will carried out. Having law enforcement officers refuse to carry out the law is a recipe for apartisan anarchy in the future.

Again, critical mass argument. There aren’t enough State LEO’s to effectively enforce unconstitutional prohibitions. Is this divisive? Yes. It’s time to stop pretending that it isn’t, or that we should all “enforce it until it gets figured out in the courts” when we know the courts have are very partisan as well.

This division is running amok because bad laws keep getting passed. Every time a bad law makes it into the books, erosion of legitimate authority occurs and divisiveness increases. The consent of the governed wanes further and we get closer to less than ideal political climates like that currently illustrated in Virginia. When the government is focusing the the defense of its citizens individual liberties and is carefully framing each and every rule with that in mind, the legitimate authority is retained. Even if a citizen group disagrees with a rule the spirit of good governance overall can be maintained by the transparent and overt policy decisions being disected in the light of being as minimally invasive as possible to be effective.

I see your point, Batsuhk, I really do.

And ideally it would be an easy, quick, apparent ‘law passage’ to ‘law struck down as unconstitutional’ for these onerous ineffective restrictions. But people are worried because they do not see that. They don’t see an even hand in the courts across the nation right now, they see a piecemeal application that leaves the rights of a New Yorker and Californian vastly different than that of a Texan or Michigander. With the massive partisan disparity and court cases that should probably see the light of day and get a decision sometimes dying because they simply can’t be funded… faith in larger governing bodies is eroding.

So ultimately, even if this is a symbolic gesture, the fact that it has entered into the political discourse is a salient point that Richmond and Washington D.C. need to pay very close attention to. If Richmond wants to clash with its counties on this resulting legal fallout and further erosion is something I don’t know if Richmond is ready to take the necessary steps to avoid and regain the confidence of its citizens.