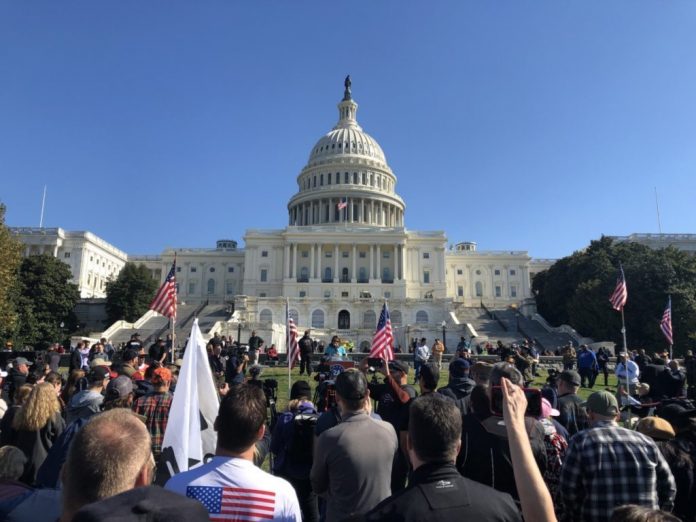 From our friends at DRGO
(from dailytruthreport.com)

This past weekend I celebrated my First Amendment right to free speech and peaceable assembly on the Capitol Lawn at the first 2nd Amendment Rally with perhaps two thousand of my fellow Second Amendment supporters from around the nation.

It was a particularly apropos moment. Elections are just days away here in Virginia that could dramatically alter the direction of the Commonwealth, and it is only a week before we celebrate the service of military veterans who sacrificed so that we could enjoy these rights.

Unlike the subsidized Bloomberg minions, this event was entirely grassroots. Speakers paid their own way and, as NRA Board of Directors member Anthony Colandro said, the attendees “Paul Revere’d” their “you-know-whats” there however we could.  We don’t have to be paid to speak out on behalf of our rights, because we all know that we must advocate strongly, persistently and united, or we will surely lose them.

This rally had two very important themes. The first is that each and every gun owner is the gun lobby.  We aren’t a well-heeled special interest group with fancy lobbyists.  #Wearethegunlobby is everyday people from every walk of life who know that all of our rights depend on having a healthy constitutional republic that governs justly only with our consent.  #Wearethegunlobby is the final defensive line against tyranny. We know that government cannot be everywhere to protect us. All we require is to be free to defend ourselves and those we love.

The second theme was unity.  Not all speakers saw eye-to-eye on all the details that follow the above assertion, but differences paled in comparison to those core beliefs. They all came together to speak against the confiscationists.  Leaders of ‘Save the Second’ spoke after NRA directors and Dan Gross, former president of the Brady Campaign, to a crowd that wore MAGA hats mixed with liberal gun owners (r/liberalgunowners on Reddit), members of the LGBTQ community, and people from every ethnic background. The Second Amendment is demonstrably the largest tent there is. What brings us together is so much more important than any of those elements.

There were several poignant moments that made it clear that this advocacy isn’t just about words on yellowed documents written by dead white men.  Gabby Franco, a world-class Olympic shooter, described her former country Venezuela’s descent into tyranny and runaway crime after civilian disarmament in 2012. Kerry Sloane of ‘We the Female’ described her triumph over past domestic violence and her mission to ensure that women are able to defend themselves.  Kevin Dixie of ‘No Other Choice’ said that where we have come from (slavery and racist violence) must not define where we go as a unified group. Such a degree of honesty and acknowledgement of our differences while modeling unconditional acceptance is hard to find anywhere else.

We celebrated victories and took notice where challenges lie ahead.  Dick Heller of the Heller vs. D.C. case, in which the Supreme Court struck down D.C.’s unconstitutional infringements against the individual right to keep arms appeared, as did Cam Edwards now of Bearing Arms. They emphasized that there are twice as many constitutional carry (no permit needed) states as there are “may issue” states. Anthony Colandro called for everyone to pitch in to help states like his New Jersey, because what takes root there has had a record of spreading to other states. Joshua Prince spoke of his successful litigation against a slew of infringements that have been attempted in Pennsylvania.

The rally opened with the Pledge of Allegiance and it closed with our National Anthem.  The lawn was left as spotless as we found it.  We were commissioned to continue our grassroots efforts:  knock on doors for political allies, invite and educate the uninitiated to our sports, and to continue to assemble and speak out against unconstitutional infringements wherever we find them.

–Dennis Petrocelli, MD is a clinical and forensic psychiatrist who has practiced for nearly 20 years in Virginia. He took up shooting in 2019 for mind-body training and self-defense, and is joining the fight for Virginians’ gun rights.