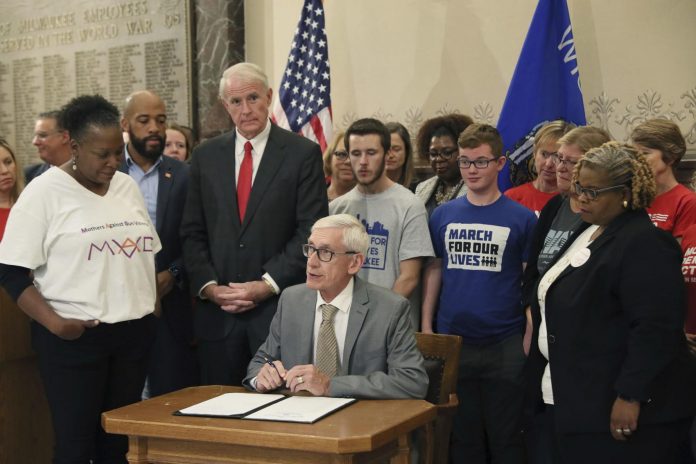 All the cool kids are doing it so Tony Evers, Democratic Governor of Wisconsin, is too. On Monday he signed an executive order calling the Senate and Assembly into a special session to discuss gun control.

The Senate and Assembly are in Republican majority hands right now and so, as is usual along party lines and priorities, gun control is not near the top of their things to do. It has a tendency to irritate their base of voters.

Evers made the announcement at a Monday press event in Milwaukee. Democratic legislators and survivors of people who died from gun violence were in attendance as their usual emotional political capital.

“I don’t want any political games, I don’t want any procedural shenanigans with the rules, no circumventing of the democratic process, no last-minute amendments, no nonsense,” Evers said, before signing an executive order calling for the Nov. 7 session. “I want Republicans in the Legislature to work with Democrats to send these bills to my desk.”

Those… those are political games, procedural shenanigans, and circumventing the democratic process. Demanding bills that you want be sent to your desk and using the obvious ignorance of the voter base in loaded poll questions to support it. You’re doing the thing you don’t want, Governor, political games. None of the pet legislation that is popular in gun control circles right now, red flag laws, UBC’s, and ‘assault weapons’ bans would curb national or Wisconsin crimes involving guns for all the reasons that have been laid out time and time again.

UBC’s are totally unenforceable. Red Flag laws are overly broad and ripe for civil rights abuses, especially when politicos don’t want “gang members” to be used as a red flag indicator as it would unfairly target minority communities. It’s a telltale sign that this is a political game, not a public safety concern, when the number one source of ‘gun violence’ is taken off the table because it would be ‘racist’.

Remember kids, gun violence is an epidemic that we must take on with extreme measures and leave no option off the table, unless it will lock up anyone other than white men, can’t risk that minority vote. God forbid we acknowledge that, after suicide, criminal violence among the criminal elements make up the lion’s share of the body count. And don’t forget to gloss over the fact that impoverished minority communities are where and who those bodies most often are.

“No one deserves to die by a bullet because of the ignorance of their politicians,” Mandela Barnes said. Barnes is the Lt. Governor of Wisconsin.

That’s a bold statement and speaks of a complete lack of awareness to how poorly politicians run wars, but we can keep this in the local community I suppose.

What “political ignorance” is fueling Wisconsin shootings? Where are the pile of criminals who would have been deterred by a background check? Please show us the evidence that the lack of ‘Red Flag’ capability is harming and how adding said ‘Red Flag’ capability will result in a reduction incidents. In what way will curtailing the civil rights of your citizens benefit them?

The Senate and Assembly seem to share the opinion that this political game the governor says he does not want is just that.

“A special session call will not change where my Assembly Republican colleagues and I stand on protecting the 2nd Amendment rights of Wisconsin citizens,” Vos said in a statement. “As I have repeatedly said, we will not entertain proposals that infringe on our constitutional rights. Today’s call is another indication that Governor Evers stands ready to confiscate guns in our state.”

But it’s not a political game, right Evers?

“We need an up or down vote,” Evers said. “At the end of the day, how many times can you go against 80% of the people of the state of Wisconsin in developing policy and essentially tell them to go to hell and at the same time expect to be re-elected? It doesn’t make sense to me.”